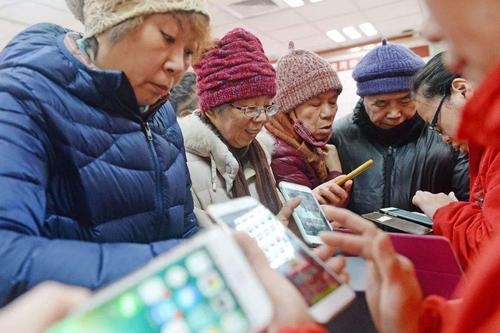 BEIJING, March 25 (Xinhua) -- "The Wi-Fi has gone." "I can't find the download." "What on earth is a verification code?" "How can I refund my registration fee?"

Last November, two videos went viral on China's social network. An old lady was denied to pay in cash for her medical insurance and a 94-year-old woman propped up by family members to activate facial recognition for her social security card.

The videos sparked heated discussions about the inconvenience and burden forced upon the elderly by the popularization of digital services.

In the same month, the State Council launched an initiative to help seniors bridge the digital divide, introducing a set of measures to help the elderly better adjust to technological innovations.

While the guideline requires relevant parties to keep non-digital services, it also encourages tech companies to tailor their products for seniors.

The plan sets objectives for the 2020-2022 period focusing on seven types of services and scenarios frequently encountered by the elderly, such as healthcare, recreational activities, transportation, and civic services.

In January, the Ministry of Industry and Information Technology launched a year-long campaign to make online applications more elderly-friendly.

Tech companies have been responding to the guideline actively.

For mobile phone manufacturers, Xiaomi, Huawei and Oppo rolled out features to let the tech-savvy young generation help their parents with their smartphones via remote access and screen sharing, which have been available on Tencent's instant messaging software QQ for years.

With the new features, parents no longer have to describe what is happening on their screen. One will be able to remotely control his or her parent's phone and see precisely what is happening.

In January, Baidu launched a large-font search app designed for the elderly. The app also features a "companion radio" broadcasting the hottest news of the day and supporting voice search.

Also in January, mapping service provider Amap and ride-hailing giant Didi rolled out new services for seniors, featuring functions such as one-click ride-hailing that does not require inputting a destination-along with bigger fonts.

Liu Qingfeng, a deputy to the 13th National People's Congress (NPC) and board chairman of iFlytek, said that it is necessary to use technologies like artificial intelligence and big data and considerate services to help the elderly adapt to digital development and enjoy digital life.

Liu proposed making the public service hotline as a portal to various mobile apps. As most seniors can make phone calls, AI chatbots will identify their needs and connect to the related apps.

By the end of 2019, China had a population of 254 million aged 60 or above, accounting for 18.1 percent of the national population. According to the Ministry of Civil Affairs, the number is expected to exceed 300 million in the next five years. Enditem