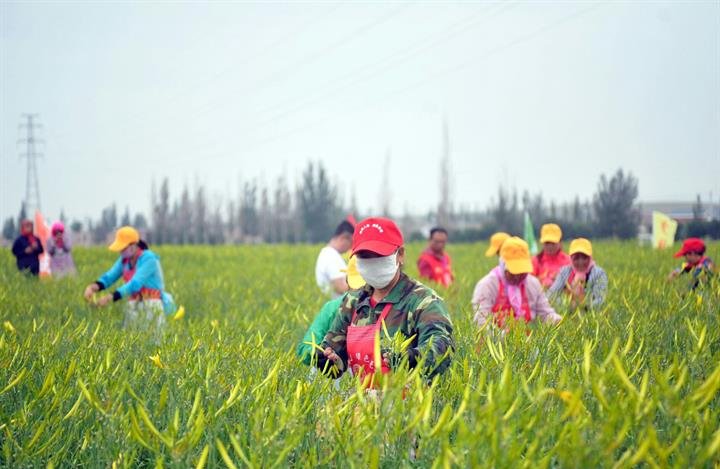 Dried daylily buds are among the most notable edible flowers in China. In the country's poverty alleviation campaign, planting the flower has become an effective means to bring fortune to farmers in China's northwest.

Hongsipu District of Wuzhong city, covering about 1,790 square kilometers, in the southern part of Ningxia Hui Autonomous Region is one of China's largest areas for people relocated from inhospitable environments. Daylily plantations are a key factor in combating poverty in the region.

Xingmin village is a key daylily plantation base, with a population of more than 700. Over 70 percent of residents grow the flower or work in related industries.

Farmer Ma Linze owns 1.3 hectares of daylily fields. As the flowers have yet to enter blooming season, Ma and his wife help others with their harvests.

"Daylily buds should be picked before they go into full bloom, so timing is important," Ma said.

Picking is the first step, and for the next, steaming and drying are needed to eliminate poisonous substances in the fresh flowers, making them ready for use.

"The price of dried flowers is about 48 yuan per kilogram, about eight times the price of fresh flowers," said Su Hailiang, director of Taiyangshan Sunshine Agricultural Products Cooperative.

Dried daylily buds are believed to have great medical value, including helping with urination, digestion and coughs. They are chewy and fragile and used in a popular Chinese dish named Moo Shu Pork-- fried pork with scrambled egg and black fungus.

"The quality of daylily buds from Xingmin are good. Buyers gather here from Guangdong, Hunan, Liaoning and many other provinces in the harvest season," Su said.

Daylilies are not native to Hongsipu, but the dry climate, sandy soil and sharp drop in temperature at night make it an ideal place to develop the lucrative industry.

"Most farmers grew corn before, but earned little. In 2016, the district government started giving subsidies to encourage farmers to grow daylily flowers and raise incomes," said Ma Caiping, a worker at the Agriculture and Animal Husbandry Bureau in Hongsipu.

In Xingmin, per capita annual income was 30,000 yuan in 2016, and the village was taken off the impoverished-list that year.

Li Yaozhu was one of the first to benefit. "I've grown the flower for 10 years, and it has earned me two cars," he said.

Over 200,000 people now live in Hongsipu, and the poverty rate is around 18 percent, according to government statistics.

"Daylilies are good to sell now, which is effective in helping us fight poverty," said Wang Rong, the deputy Party chief of Hongsipu.