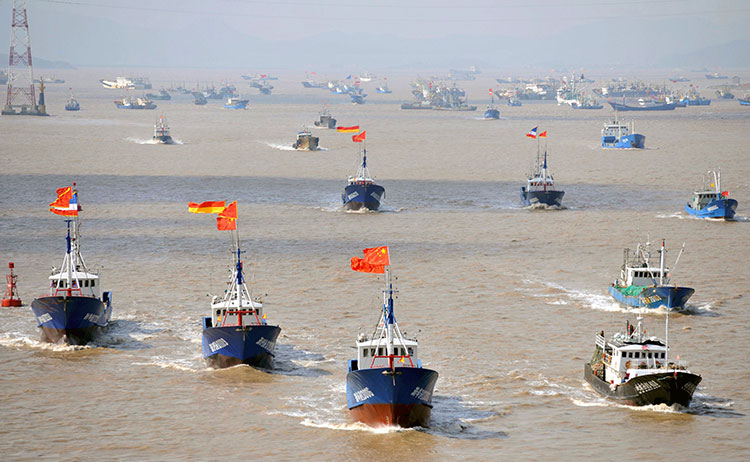 Every day at 9 a.m., fisherman Zhang Peng starts a new day's work along the mighty Heilongjiang River: he turns on his mobile phone, logs on to his live streaming account and broadcasts his daily fishing.

"This is the Wusuli River, in China's easternmost city, and these are salmon," Zhang explains during a live streaming session.

He holds a fishing net with both hands, a salmon in the net, while his wife holds a mobile phone to broadcast his catch.

Zhang, 32, has recently become an online celebrity due to the live streaming. In his hometown of Fuyuan, in northeast China's Heilongjiang Province, he often hears locals scream his name in the fish market.

"I used to be an obscure person in this small town," Zhang says. "It's hard to believe that I have become an Internet star."

Live streaming is big business in China. It generates huge profits for the host websites and catapults many "presenters" to overnight fame -- not without lining their pockets, too. According to China Internet Network Information Center, by the end of June 2016 there were 325 million live-stream users in China -- about half the entire online Chinese community.

Zhang has a huge 869,000 followers on the Internet, almost seven times the number of residents in his hometown of Fuyuan, China's easternmost city. The city sits on the border area, separated from Russia by the Heilongjiang River and its tributary, the Wusuli River. The border rivers have an abundance of freshwater fish like salmon and sturgeons. Locals call the city "Golden Fish Bay."

Before trying live streaming, Zhang's life had always been about fishing.

"My great-grandfather, my grandfather and my father were all fishermen on the Wusuli River," he says. "I started fishing when I was a child, and officially became a fisherman when I turned 17."

Zhang says that in the past, his life was "just like the average fisherman." The job could only guarantee a "basic life." Seven years into their marriage, the couple had only managed to save 40,000 yuan (6,044 U.S. dollars).

But since the live streaming, Zhang's life has taken a different turn. His followers increased from 20 initially to more than 800,000. This increased his earnings, as followers who watch the broadcast often give tips on the streaming app.

For each live streaming session, Zhang says he can make more than 1,000 yuan. He once received more than 5,000 yuan from his followers.

"I think people just love how simple and fun our life is via the camera," he says.

In addition to his simplicity, Zhang says that the online community loves how he can catch a variety of fish species and the way he introduces the fish. This fishing season, he caught a giant catfish weighing more than 35 kilograms. Zhang held it in his arms and showed it to netizens.

"The fish was as long as my height," Zhang says. "It was quite heavy, and my body almost bent!"

Sometimes Zhang also shows his followers how the locals enjoy a night of barbecue and beer after a day's fishing.

Zhang says that the rising number of fish in the river has contributed to the popularity of his live streaming.

"These years, the number of fish in the rivers is on the rise thanks to the government's annual fishing ban, as well as artificial breeding," he says.

"If it were not for the big number of fish, we would not have become so popular on the Internet," says Zhang's wife, Ji Duoduo.

"I just want to share the best things along the Wusuli River with my followers, and I hope they will find joy in watching my broadcast," Zhang says. Enditem