CHINA Across China: Pet funerals on the rise

Across China: Pet funerals on the rise

HEFEI, April 16 (Xinhua) -- On a table in the mourning room, Yang Siwei carefully wiped the blood off the body of Dumbo, a 9-year-old toy poodle.

The pet owner, Chen Tingting, stood beside the table to bid farewell to her deceased furry friend that was hit by a car two days ago. 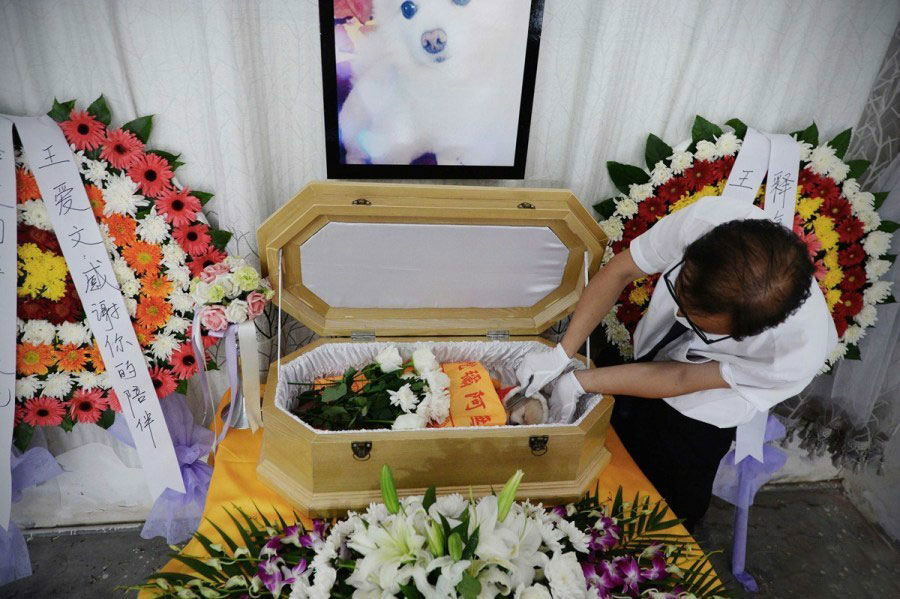 A staff member from a pet funeral company grooms a deceased pet dog inside a memorial hall at Minhang district in Shanghai on August 29, 2015. (Photo: China.com)

Yang, a pet undertaker in east China's Anhui Province, helps pet owners like Chen to prepare funerals for their beloved pets. After working for three years, Yang has cremated hundreds of pets.

Pet funeral services are picking up steam in China, as millions of pet lovers seek new ways to bring closure to their relationship with their companions.

According to a report on China's pet industry, the number of pet owners in Chinese cities has reached 73.55 million, with 53.9 percent willing to purchase a pet funeral service.

"We've been living together for nine years, and it is already a family member," Chan said of her toy poodle, crying. After the cremation and funeral, Chan bought an urn to bring Dumbo's ashes home.

Outside the mourning room is a wood, where around 30 pets are buried. Each is put under a tree with wooden fences and flowers around it, and a tablet showing the owners' thoughts. There are even several tombstones set up in the cemetery, with photos of pets on them.

"Most owners would take home the ashes, while some chose to bury them here," Yang said.

Yang got into the business after her cat died of a plague four years ago. Knowing that burying its body would have brought health risks to other pets and polluted the environment, she decided to cremate her feline friend.

"But I couldn't find a single agency for cremation in Anhui back then," Yang recalled. After many trips, she eventually found one in neighboring Jiangsu Province, and had a proper funeral for the cat.

In 2016 when Yang first became a pet undertaker, she cremated about two to three pets each month, but now the number is more than a dozen.

Yang said despite the presence of funeral services in big cities like Beijing and Shanghai, the pet funeral service market is still in its early phase in a large part of the country.

Experts say more assessments and discussions are needed to determine how foreign practices in the pet funeral industry can fit China, such as setting up land designated for burying pets.

"We are still taking baby steps," Yang said. "But I am glad to see more people paying attention to the sector."