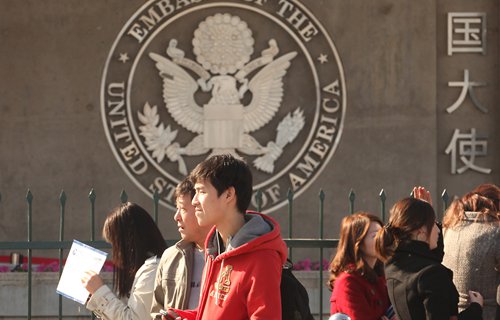 People queue outside the US Embassy in Beijing to obtain their visas. (Photo: IC)

Doctoral student Teng Fei may not be able to present a paper at the US National Aerospace and Electronic Conference (NAECON) 2018 later this month, despite a glowing invitation letter from the organizers.
He says his visa would normally be approved in two or three days. But in the last few months, graduate students and visa agents have noticed a rise in the number of applications that are being delayed for weeks. Due to the timing, they suspect the move is a result of the trade friction between the US and China, and a larger move to block Chinese access to US technology.
The US denies any change in policy. After the Associated Press reported in May that the US planned to launch a new policy to shorten the length of validity for some visas issued to Chinese students who are studying in fields such as robotics, aviation and high-tech manufacturing, a US spokesman responded, "The US State Department has not limited the validity of any visa category to Chinese visitors."
However, three Beijing-based US visa consultants who have many years of work experience told the Global Times that in the last two months, the number of lengthy checks has increased on Chinese graduate students, experts and employees in STEM (science, technology, engineering and mathematics) fields.
"Before the trade friction, few Chinese graduate students' visa applications were checked," said Zhao Yonghui, an experienced visa application consultant at Beijing Huanzhong Education Ltd. "Now in my agency some graduate students whose majors are computer science, mechanical engineering, and electrical and computer engineering are checked."
According to Shen Pengfei, a US visa consultant at popular Chinese overseas education company JJL Overseas Education Consulting and Service Co, Ltd, "More visa applications related to high-tech industries are checked. In the past, the ratio of checked applications was 1:10, now it is around 3:10. The document review takes more than a month," Shen said.
'Case-by-case'
After submitting his business visa application to the US Embassy in Beijing at the end of June, Teng was told on the spot his application needed to be checked for an uncertain number of days, up to a maximum of four weeks, judged case-by-case.
"He just glanced at the conference invitation and told me right away that my visa application needed to be checked," Teng said.
After preparing his research paper carefully for months, Teng sent his work to the NAECON, which is the oldest and premiere IEEE (The Institute of Electrical and Electronics Engineers) conference, covering research in aerospace systems and sensors.
If he does not receive the visa before his flight, all the hard work will be in vain.
"I asked several friends from my undergraduate class who went to the US to attend conferences, and they said their visa applications were all checked recently. I feel all students from science and engineering majors are being checked," Teng added.
His major, signal and information processing, is widely used in the telecommunications field. What's more, Teng's academic interest is particularly related to a military application - radar, which a US visa officer will flag as a sensitive topic. 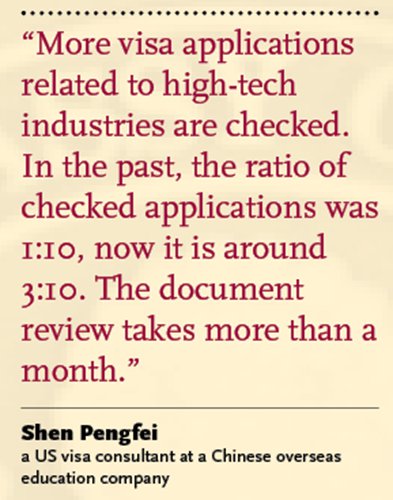 New administration
The visa limits are likely related to the Trump administration's fear of China's rapidly growing technology industry.
For example, Huawei, China's top telecommunications equipment manufacturer and the world's number three smartphone maker, is facing a prospective ban on selling its gear to some American mobile providers.
Liu Yuanyuan, account manager at Beijing-based Huijia Visas Consulting Group, said if Huawei's employees apply for an American visa, it is almost impossible for them to get approved. "As a result, we don't accept Huawei employees' orders. This is widely acknowledged in our industry."
As of press time, the US Embassy in Beijing has not responded to the Global Times' inquiry about the frequent visa application checks happening recently on Chinese students and employees in technology fields.
Teng wasn't positive about the prospects for him getting a visa ahead of his trip to Ohio.
"There is a big probability that I can't go to the conference… It would be a huge pity if I can't go. Moreover, my research paper would be withdrawn," he said.
Unintended consequences
Some are worried about the economic cost of these restrictions to the US because Chinese students account for one-third of the total number of international students studying in America, contributing $12.55 billion to the American economy in 2016, according to an Institute of International Education Open Doors report.
Ted Mitchell, president of the American Council of Education, said in a statement that restricting international students' visas risks indicating that America doesn't welcome smart students any more.
The University of Pennsylvania released an article after they noticed prospective Penn graduate students may face visa application issues. The article says, "In the 2017-2018 school year, Penn had 164 undergraduates and 1,608 graduate students from China. Many of them, particularly graduate students in STEM programs such as robotics, could potentially be affected by the changes in visa policy."
As a result, the school encouraged students and scholars in STEM fields to apply for their visas in advance and "take the new visa limitations into consideration," according to an announcement from Penn International Student and Scholar Services.
"It is a reality that the US has restricted visas to Chinese students in high-tech field because the US thinks these students may steal high-tech skills as well as intellectual property from the US," said Tao Wenzhao, a researcher at the Institute of American Studies, Chinese Academy of Social Sciences.
He added it is a trend that more limits will be imposed on Chinese who want to further their education or carry out research in fields like aerospace, artificial intelligence and robotics.
Jin Canrong, vice president of the School of International Studies at the Renmin University of China, said that if the visa limitation policy is true, the hindrances that China faces will be very subtle.
"On the other hand, the US will pay a price because Chinese STEM graduates are providing high-quality labor to American technology companies," said Jin.
Bigger crackdown
The added scrutiny on visa applications is just one aspect of the growing trend.
The director of the Federal Bureau of Investigation, Christopher Wray, in February reminded American universities to be more cautious about the risks of Chinese students and researchers, who he said are trying to take advantage of America's open research environment.
Congressman Mike Gallagher proposed in May that the US should be alert about "foreign talent recruitment programs and their role in facilitating technology transfer to pure competitors."
Gallagher said that China's "Thousand Talents Plan" aims to attract academics to come to China and "participate in cutting-edge research in service of the Chinese goal of becoming the leading global science and technology power by 2049."
If his proposed amendment of the National Defense Authorization Act becomes law, it would permit the Defense Department to stop funding individuals who have participated in talent recruitment programs operated by China, Iran, North Korea or Russia.
Shen Dingli, deputy director of the International Studies Institute at Fudan University, said that amid the background of trade friction, the US seeks two things. First, it wants China to increase imports from the US. Second, the US wants to limit China's ability to export to the US, especially high tech products. This means the US will prevent China from investing in, merging with or buying US tech companies.
"America is warning China that if you do not make concessions, it will not let your scholars go to conferences in the US and will not let Chinese gain any advantage from America in the technology field," he said. "But if China's technology field develops well, many conferences will be held in China… In the future, we are going to be the main resource of scientific and technological innovation, rather than the US."