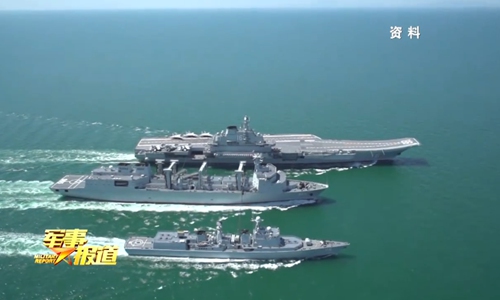 The exercise saw the Hulunhu replenish warships in the carrier group for the first time, the report said.

Ni Jingdong, a political commissar of the Hulunhu, said on CCTV that the ship and its troops were now fully capable of comprehensively replenishing the carrier battle group.

The Hulunhu has spent more than 200 days at sea in exercises this year, according to the CCTV report.

As troops familiarize themselves with the Hulunhu in the exercises, the battle group headed by Liaoning, China's first aircraft carrier, will gain the capability to go farther from coastal areas into  deep blue waters without having to worry about logistics, a Beijing-based military expert who asked not to be named told the Global Times on Sunday.

The first aircraft carrier battle group supplement mission by the Hulunhu will serve as a valuable experience and such missions will become normal for China's other supply ships and aircraft carriers, the expert said.

As the first Type 901-class ship, the Hulunhu has a displacement of around 50,000 tons and was built specifically to accompany aircraft carrier battle groups, js7tv.cn, a website affiliated with the PLA, reported in April.

The Hulunhu is capable of replenishing oil, water, food, repair pieces and munitions for multiple ships at the same time, the China Youth Daily reported in September 2017 when the ship was commissioned into the Navy.

Military analysts predicted the Chaganhu could team up with China's second aircraft carrier, the Shandong, which is based in Sanya, South China's Hainan Province.

Shandong, China's first domestically developed, was delivered and commissioned to the PLA Navy on December 18 in Sanya after refitting and sea trials since its launch in 2017.