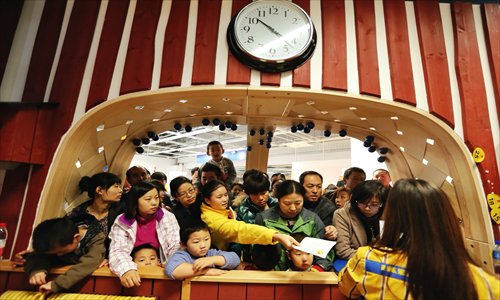 Customers line up for childcare services at a newly opened IKEA store in Beijing on Saturday. (Photo: CFP)

A member of the National Committee of the 13th Chinese People's Political Consultative Conference (CPPCC) recommended that nursery services for children under the age of 3 be included in the public service system to relieve parenting burden, which is an important cause of the current low birth rate in China. Gao Xiaomei, who is also a vice chairman of the Revolutionary Committee of the Chinese Kuomintang, said at a plenary meeting of the second session of the 13th National Committee of the CPPCC the lack of childcare services impedes the full implementation of the second-child policy, Beijing Youth Daily reported Sunday. Chinese demographers in January said that the number of newborns in 2018, the third year after the second-child policy was fully implemented, may have dropped by more than 2 million and the country's birth population will continue to fall. China had 17.23 million births in 2017.Gao pointed out that heavy parenting burdern is an important reason for less births. She added that due to a serious lack of childcare services, heavy parenting burden has not only hindered the mothers' careers but has also weighed heavily on grandparents. Gao proposed that child care services begin for those under the age of 3 to gradually establish a child care service system with government financial support, tax deductions and subsidies for grandparents.The proposal is good but needs further discussions, Zhai Zhenwu, chairman of the standing council of the China Population Association under national health authority, told the Global Times on Monday.Zhai argued if the related institutions, including nursery schools and kindergardens, should be fully supported by the government. Gao's speech were echoed by some Chinese netizens.A young mother surnamed Li told the Global Times on Monday that her family had spent more than 150,000 yuan ($22,308) on her 17-month-old son over the past two years, which is a heavy financial burden on Li's family. Li also said she was looking forward to the new policies.