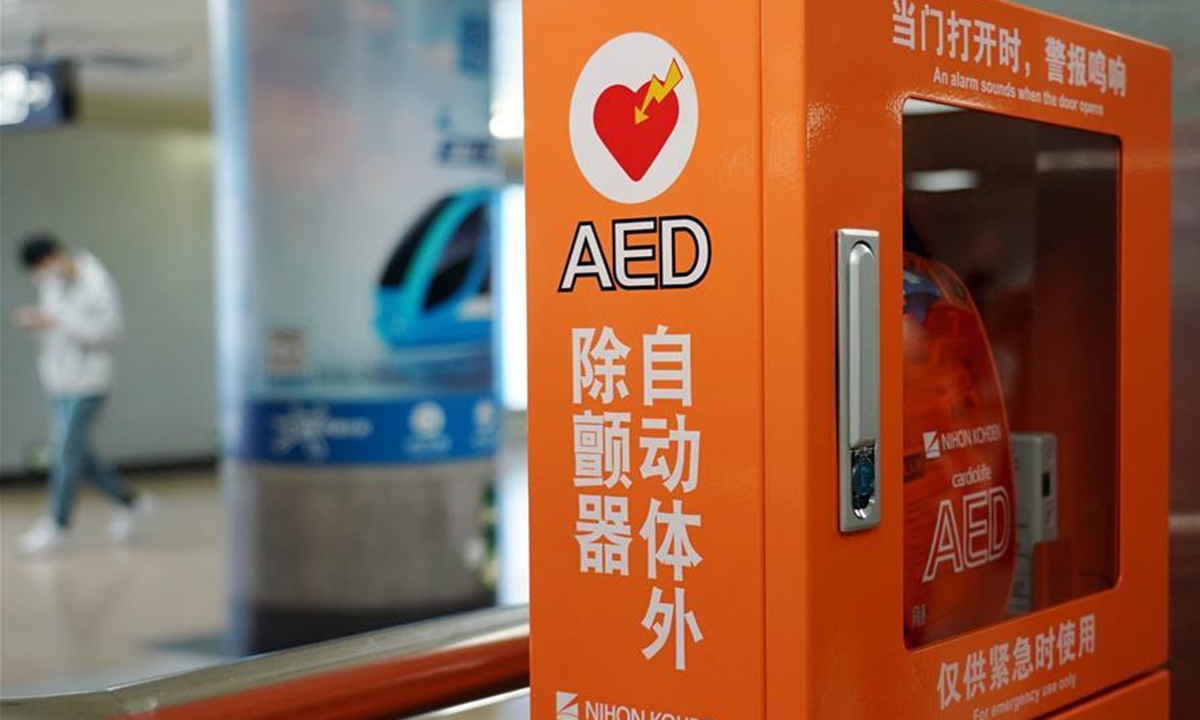 An automated external defibrillator (AED) is seen in Xidan Subway Station in Beijing, capital of China, Oct. 27, 2020. Beijing started to equip its rail transit system with AED on Tuesday. By the end of 2022, all stations of the city's rail transit will be equipped with AED. (Photo: Xinhua)

While automated external defibrillators (AEDs) are still unfamiliar to many Chinese ears, the fast dissemination of such life-saving devices in China's major cities is already making a life-and-death difference.

On Dec. 14, AEDs made headlines in south China's Shenzhen, where two residents were resuscitated with the devices after suffering from sudden cardiac arrest, a dangerous condition in which the heart unexpectedly stops beating.

In one case, a man surnamed Tu collapsed outside his workplace after experiencing blurry vision. Several passers-by came to his aid by making emergency calls, performing cardiopulmonary resuscitation, and activating a newly installed AED. The first aid bought him precious time before the arrival of medics.

A crescendo of such good news came after China's large cities including Shenzhen rushed to install thousands of public-access AEDs, responding to calls by health experts for more such devices in China's public areas.

"China's first-tier cities and several coastal provinces are on the move, and even some tourist cities in western China have taken action to install AEDs," said Yu Tao, vice director of the emergency department of the Sun Yat-sen Memorial Hospital, noting the accelerated AED deployment in China since last year.

In Shenzhen, a tech hub in Guangdong Province, more than 3,500 government-purchased AEDs had been deployed by the end of August, while in east China's Shanghai, the number of public-access AEDs exceeded 1,600, a fourfold rise from 2016.

In Beijing, cabinets containing AEDs and other emergency medicines have popped up at stations along four subway lines, and authorities have pledged to cover all rail transit stations in the Chinese capital by 2022.

Hangzhou, capital of east China's Zhejiang Province, became the first Chinese city to legislate on the dissemination of AEDs. According to a regulation promulgated in November, apart from airports and metro stations, AEDs must also be equipped in law enforcement vehicles and ships to ensure their "mobility" in the city.

"It is imperative to install AEDs and teach the Chinese public how to use them," said Wang Jingfeng, director of the cardiology department of the Sun Yat-sen Memorial Hospital.

"China has the largest number of sudden cardiac arrests in the world, and the out-of-hospital survival rate in such cases is very low," Wang said.

According to a report on cardiovascular diseases in 2016, the number of sudden cardiac deaths was estimated at 540,000 in China every year, equivalent to one such death every minute, while the rate of successful rescue is less than 1 percent.

Intended to be used by laypeople, AEDs can automatically diagnose the patient's heart rhythm and deliver a shock if needed. They can improve the rescue rate to 90 percent if the patient is defibrillated within the "golden four minutes."

However, making them easily accessible in a developing country like China is not easy, with the high cost being a key obstacle. According to the Shenzhen government, a single set of AED equipment costs 20,300 yuan (about 3,110 US dollars), excluding the annual costs of changing the batteries and pads.

"Some public venues also feared the installation of AEDs would bring them extra responsibilities," Wang said, adding that China's public-access AEDs are still "rare" compared with Japan and the United States.

The good news is that China has set the goal of disseminating AEDs in all schools, government offices, public institutes, airports, shopping malls and cinemas, according to an action plan published in 2019. A law on medicines, hygiene and public health coming into effect in June also requires all public locations to have first aid equipment.

The public's awareness of and knowledge related to emergency rescue are also catching up, said Yu.

At a hospital in Guangzhou, capital of Guangdong, an AED training workshop on Dec. 24 attracted dozens of enthusiastic residents.

"I found such training to be essential," said a community worker surnamed Yu, testifying to the rising public recognition of AEDs. "I've heard about cases of sudden cardiac arrest, so I believe it is a skill everyone should acquire to save more lives."