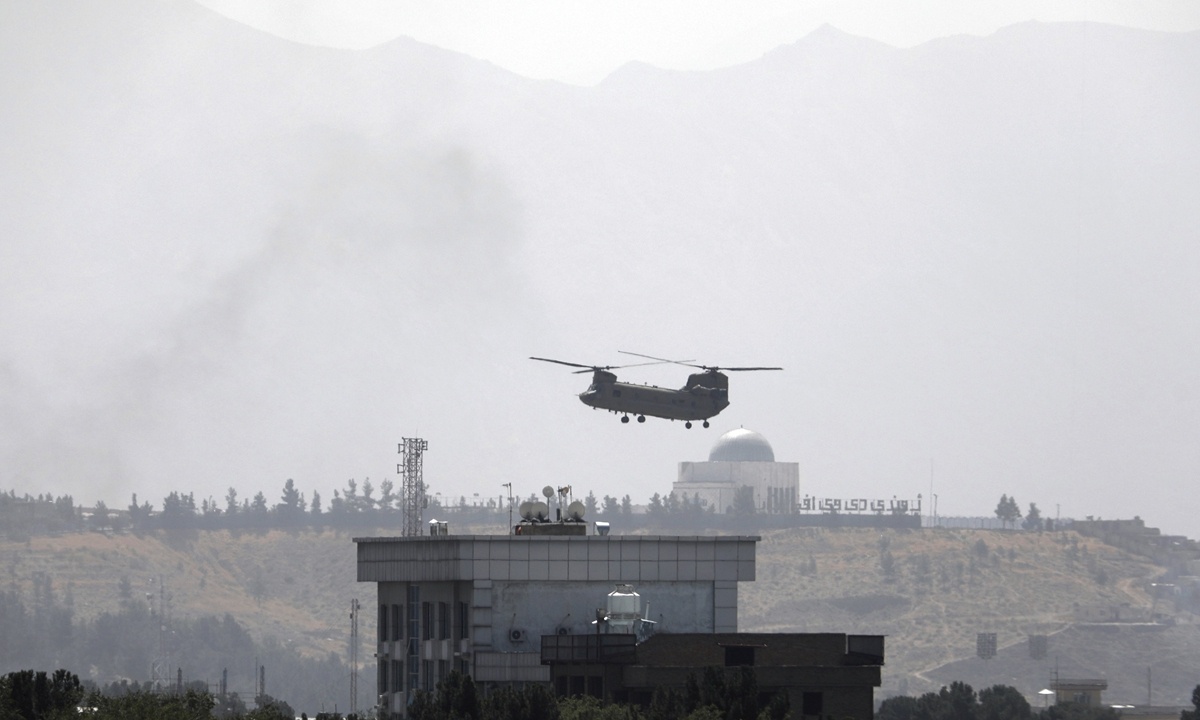 A US Chinook helicopter flies over the U.S. Embassy in Kabul, Afghanistan on Sunday. Helicopters are landing at the US embassy there as diplomatic vehicles leave the compound as the Taliban advance on the Afghan capital. (Photo: VCG)

With chaotic scenes at Kabul airport of hundreds and thousands of people fleeing after the Taliban took full control of Afghanistan grabbing global attention and many calling the evacuation of US diplomats another "Saigon moment," more discussions emerged online over "who's next" amid the US failed commitment.

For years, Washington has been turning its foreign policy into ideology-driven geopolitical games, and now the rapidly changing situation in Afghanistan has even worried some in the island of Taiwan and sounded a warning bell to secessionists there, as it's not the first time the US has abandoned its allies and the so-called alliances, which are made use of only as chess pieces in Washington's global strategy.

The Taliban took over Kabul, the capital of Afghanistan, on Sunday as the country's president Ashraf Ghani fled the country. Many were shocked at the speed with which the Taliban took control as the US-backed government collapsed, and they compared the scenes in Kabul of US diplomats being taken to safety by helicopters to the US withdrawal from Vietnam in 1975, when US Marines burned sensitive documents on the roof of the US embassy in Saigon. The Washington Post also pointed out that the Taliban's stunningly swift advances across the country have sparked global alarm, reviving doubts about the credibility of US foreign policy promises and drawing harsh criticism even from some of its closest allies.

"Yesterday's Saigon, today's Afghanistan, and tomorrow's Taiwan?" read some online posts by internet users in the island of Taiwan, implying that the so-called alliance that Taiwan has forged with the US is nothing but an empty promise that will eventually "leave the Taiwan people hurting alone."

An Op-Ed in local Taiwan news site udn.com said that the unexpected end in Afghanistan has "shocked" US allies and partners, who have become wary of putting the safety of Taiwan in the hands of the US, as the latter may pull the same tricks played in Kabul.

The US withdrawal from Afghanistan will also have a global impact, especially weighing on its image and credibility, the Op-Ed in a Taipei-based news site said, as Washington's strength in maintaining the global order will be challenged, and the power confrontation in the Indo-Pacific Strategy targeting China will be questioned.

"They should say the day before yesterday, Vietnam, yesterday, Taiwan and today, Afghanistan. Wasn't the island abandoned by the US in 1979?" Chang Ching, a research fellow at the Society for Strategic Studies based in the island, told the Global Times on Monday.

As part of its latest efforts to play the "Taiwan card" in countering China, the Biden administration recently announced it would hold a virtual Summit for Democracy, which excited the Democratic Progressive Party (DPP) authority of Taiwan. Since taking office in January, US President Joe Biden has taken various measures to demonstrate its deterrent against China, such as deploying military aircraft to the island, sending warships across the Taiwan Straits several times and dispatching senior officials to visit the island, blatantly playing the "Taiwan card" to ruffle China's feathers.

However, the failure of the US in Afghanistan should serve as a warning to the secessionists in the island, who have to understand that they cannot count on Washington, as Afghanistan is not the first place where the US abandoned its allies, nor will it be the last, experts warned.

The aftermath of its failure in Afghanistan will further weigh on the Biden administration, as it is still struggling to contain the COVID-19 epidemic, which will put the US government in an awkward position not only at home but also overseas, as the total defeat of the US has dealt a fatal blow to Biden's political career and the Democrats' credibility, Li Haidong, a professor at the Institute of International Relations of the China Foreign Affairs University, told the Global Times on Monday.

"The US' fleeing action is a warning to the Taiwan secessionists, or rather, a forecast," Li said. He noted that if the island of Taiwan continues on a path misled by secessionists to directly confront the Chinese mainland, the US will cast Taiwan aside just as it has done with Vietnam, and now Afghanistan.

The Associated Press said in a report on Sunday that the 20-year war in Afghanistan was the US' longest and most expensive one, and generations of Americans will have to be burdened by the cost of paying it off. As of 2020, the estimated cost of the wars in Afghanistan and Iraq that the US has debt-financed has reached $2 trillion, the report said.

While observers doubted the geopolitical value the island of Taiwan could deliver to the US in confronting China, some also raised questions about how much the Biden administration, which upholds the one-China policy, is willing to pay for the interests of Taiwan secessionists compared to its heavy investment in time and resources in Afghanistan.

"Those who have a clear mind should understand that Taiwan residents can't rely on the US. However, given the ideology-driven influence, some observers may see the situation in the island as being different from that in Afghanistan, but there's one thing in common - America's empty promise," Jin Canrong, associate dean of the School of International Studies at the Renmin University of China, told the Global Times on Monday.

The failure of America in Afghanistan will surely deala heavy blow to the Taiwan residents, and the DPP-led green camp may try to downplay its impact, Jin said, noting that the US retreat showed that it always puts its own national interests above everything else without taking care of its own allies.

One media outlet in Taiwan also pointed out that the key issue is if a war breaks out across the Taiwan Straits, there will be doubts over whether the US will honor its commitments and intervene militarily, as the US' "blurry" policy on the island and its snap decision on the Afghanistan issue have left its commitment to Taiwan "full of question marks."

The US retreat from Afghanistan has taught the island of Taiwan an important lesson, that is, the cross-Straits relations must be resolved by Taiwan itself, as the US may choose to abandon the island at any time according to its own core interests, Chang Ya-chung, a Taipei-based political scientist and member of the Kuomintang, told the Global Times on Monday.

Furthermore, the US has never promised to send troops if a military conflict occurs across the Taiwan Straits, and only said that it would sell weapons to Taiwan to increase its military strength, Chang noted.

Recalling history, Chang said that the US abandoned the Kuomintang authority in the 1940s after World War II, roped Taiwan in during the Cold War to cater to its own needs, but cast it away again in the late 1970s.

Chang also emphasized that in face of the crisis, both the mainland and the island should keep in mind that we should not try to seek the answer from the past, but to find a way out in the future.