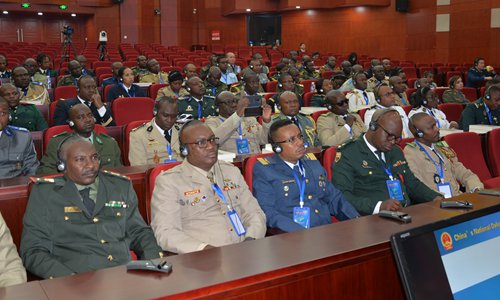 The delegation of African military officers at the opening welcome reception on April 21. (Photo: Courtesy of the Chinese Ministry of National Defense)

A delegation of around 100 young military officers from African countries and the African Union had a weeklong visit for the first time to China from April 21 to 27 at the invitation of China's Ministry of National Defense, as part of efforts to cement the outcomes of the Beijing Summit of the Forum on China-Africa Cooperation (FOCAC) held in September 2018. The visit is expected to promote exchanges between Chinese and African military officers, deepen the friendly relationship between China and African militaries, and strengthen China-Africa cooperation regarding peace and safety, as demonstrated by the growing Sino-Africa relationship.

The delegation visited top Chinese military academies such as the Chinese People's Armed Police Force (PAP) Special Police College, and viewed a performance by the Chinese PLA Air Force's August 1st aerobatic team. They also participated in talks on the Belt and Road Initiative, and attended lectures on various topics including the China-Africa military relationship and military leadership.

They also went to Hangzhou, Zhejiang Province to visit the venue of the G20 Hangzhou Summit and Chinese high-tech giants such as Alibaba Group.

Major General Ci Guowei, Chief of the Office for International Military Cooperation of China's Central Military Commission (CMC), delivered a speech on behalf of China at the opening welcome reception on April 21. He said that the purpose of this visit is to implement the achievements reached at FOCAC, and the exchange serves as an important platform for middle-aged and young military officers from the two continents to conduct communications and enhance mutual understanding. He said that the exchange deepens the traditional friendly relations between the armed forces of China and African countries. The visit plays an important role in maintaining the continuity of China-Africa defense relations and accumulated positive energy for mutual development.It is hoped that young Chinese and African military officers will join hands to safeguard regional peace and stability and contribute to building a closer community with a shared future between China and Africa, Ci said."I was very happy and excited when I heard that I could have a chance to visit China," Captain Allain Pierre, director of Human Resources from the Seychelles People's Defense Forces, told the Global Times. "I was very impressed by the Chinese army's discipline. Everything is in great order, and the military has a very good use of manpower," he recalled of his visit to PAP Special Police College where he was shown demonstrations of anti-hijack rescue, shooting and other anti-terror operations. "Their facilities are very modern, well equipped, and the standard of training is very high. We had a great lunch together with the Chinese cadets, and exchanged our understanding of each other's armies, which was a really good experience," he said.

"Seychelles is a small country and it has to be exposed to a bigger world, which is very important to our development. We had a lot of cadets coming to visit China over the past decades. I expect more in the future," said Allain Pierre. "All I know about China before my visit is it is a good country with advanced technology. When I knew I was selected to come to visit China, I felt I would not be disappointed…I love to be here," Captain Oratile Ratlhaga from Botswana told the Global Times, adding that she was impressed by almost everything, especially the high level of professionalism in the Chinese army. She expects the President of Botswana can soon visit China again, and "bring more commanders to China to learn military tactics and pick some things that we can copy from the Chinese military."For Oratile Ratlhaga, joining the Belt and Road Initiative can become a key to opening more mutual communication. "The initiative is all about connecting, and it makes us easily connected to other countries, and to trade freely and bring more financial benefits to our country, and further strengthens ties between the two peoples," she said."We are in a position to learn from the best. China is the best we can learn from," said Oratile Ratlhaga, stressing the significance of such exchanges, adding that she is willing to recommend more peers to come to China.Grace Adhieu Reng, 27, a young female delegate from South Sudan, said she completely recognizes the crucial role of young military officers as a bridge connecting two continents in the military. "It is important to encourage more young South Sudanese to develop a good impression of China and the Chinese military. Friendship among young military officers helps to build transnational ties, and trust between the two. We want to learn from each other, of course."