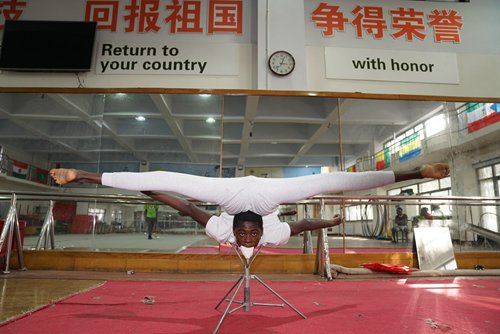 Eddi from Sierra Leone shows off his extraordinary flexibility and balance. (Photo: VCG)

In October, the latest batch of African young people came to Wuqiao, North China's Hebei Province, to learn acrobatic feats for free. African students give themselves Chinese names, and experience the monotonous daily training here, hoping that they could get a better life when going back.

Wuqiao county, also known as "the home of acrobatics" in China, has a history of acrobatics of more than 2,000 years.

As early as the 1970s and 1980s, China had trained acrobats for Ghana, Kenya, Sudan and other countries. In 2002, at the request of African countries, China's Ministry of Culture relaunched the training program for African acrobatic trainees to learn skills in Chinese acrobatic schools and communities such as the Wuqiao International Acrobatics Art School.

In recent years, with China's growing economic support for Africa, students from Africa have become the main group of overseas students at the Wuqiao International Acrobatics Art School.

A female student who came from Sierra Leone to study at the school believes that there have been "many beautiful ties" connecting China and Africa. Acrobatics is a part of this.

She told the Xinhua News Agency that even though the training is very hard, she is still very happy to learn. Whether it is learning acrobatics, the Chinese language or even new kinds of food or ways of living, she feels fortunate to be exposed to a new culture.

"Each year, the school will also arrange other content such as studying Chinese characters, Chinese paintings, Chinese martial arts, and paper-cutting to help students to learn more about China and feel the essence of Chinese culture," Qi Zhiyi, executive vice president of Wuqiao International Acrobatic Art School, told the Xinhua.

"These students from different countries are also passing on the traditional African culture to us," Qi said. On important festivals, students from Ethiopia, Sierra Leone, Tanzania, Kenya and other countries will dress up in distinctive costumes, and perform their hometown dances, drum music and other traditional programs, showing their country's style to all students and teachers.