CHINA After losing backer Trump, DPP should prove to Biden it is not a ‘troublemaker’: experts

After losing backer Trump, DPP should prove to Biden it is not a ‘troublemaker’: experts 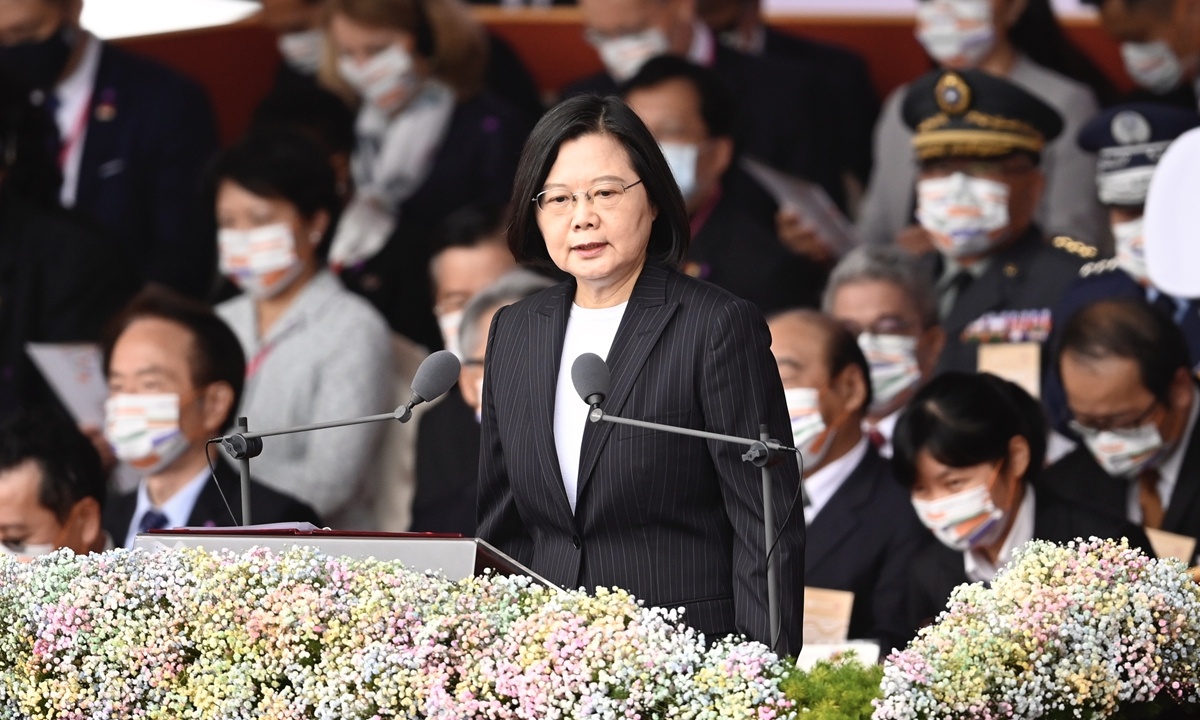 The pro-secessionist Democratic Progressive Party (DPP) authority on the island of Taiwan has undergone a roller-coaster attitude change towards Donald Trump and president-elect Joe Biden after the latter won the US election. Observers from the island said that the DPP had been left with no choice but to go all-in with Trump, and the challenge for politicians on the island now is to convince the new US administration that Taiwan is not going to be a "troublemaker."

The DPP, whose party members have been openly rooting for Trump and bashing Biden on social media before the election, was among the first group of people to congratulate the president-elect.

Under a tweet congratulating Biden on Sunday from Taiwan's regional leader and DPP chairperson Tsai Ing-wen, there are still many comments from Taiwan Twitter users saying that the "Democrats cheated." In a tweet posted by Taiwan's "foreign ministry" on Sunday, its head Jaushieh Joseph Wu said he was sincerely grateful for the Trump Administration and his "legacy" to Taiwan. Trump is still reluctant to admit defeat in the election.

Meanwhile, pro-Trump rhetoric became increasingly toned down after the two tweets, as many Taiwan secessionists started saying, "Taiwan needs to strengthen its ties with the US no matter who wins the election," in the place of "We share the same anti-China task with Trump, he must win!"

Tsai Yi-Yu, a DPP "legislator," even wore a Trump mask to a high-level DPP meeting in early November, then posted a picture of himself on Facebook along with the comment "Come on Trump!" However, he then posted a video on Facebook on Tuesday night, saying he supported Trump in a personal capacity, not on behalf of the DPP.

However, Taiwan-based experts told the Global Times that frustration and anxiety are spreading within the DPP, as Trump's failure means they have lost their backer.

The DPP seems to have had no choice but lean toward the Trump administration, as it voluntarily abandoned the option of improving relations with mainland when it came to power, and pinned its hopes on Trump, Chang Ya-chung, a professor with a Taiwan-based university, told the Global Times.

In the past few years, DPP authorities have been playing the "anti-China" card with a high degree of unanimity with the Trump administration. As the US election approaches, the pro-Trump attitude shown by pro-DPP politicians has been particularly striking, in contrast to most other parts of the world.

A YouGov poll of the Asia-Pacific region released on October 15 found that Taiwan was the only region to support Trump more than Biden, with 42 percent of respondents favoring Trump for a second term, compared with 30 percent for Biden.

"The DPP does not recognize Taiwan as part of China and does not want to deepen exchanges with the mainland, so the DPP has only one option - to move 100 percent closer to the US. At this moment, there was Trump, who is also going to fight against the mainland. Therefore, the DPP administration shows "100 percent loyalty" to Trump, said Chang.

Yok Mu-ming, the honorary president of the New Party of Taiwan, told the Global Times that the Taiwan authority's eagerness to bet on outsiders reflects the inability of the island's politicians to weigh up the intricacies of the international situation and, as a result, to bet on whoever is "best off."

But some Taiwan experts see the US as unreliable.

Shaw Chong-hai, former head of the School of Social Sciences at the Chinese Culture University in Taiwan, told the Global Times that rather than genuinely supporting Taiwan, the US is only interested in how to provoke Beijing.

The US has been supportive of the bilateral trade agreement and Taiwan's accession to the World Health Organization, but there has been no real progress in achieving this aim.

As for concerns that Trump will make more extreme moves to escalate cross-Straits relations before the new administration takes office on January 20, Yok said it is "very unlikely", as Trump is a shrewd businessman, and he will not "continue to invest" in Taiwan when he sees the situation deteriorate.

"Biden's top priority is domestic politics, dealing with US' divisions, repairing the 'holes' left by Trump, such as relations with allies. How could Taiwan be a priority?" Shaw said.

Analysts believe that the space for the DPP will be narrowed, as the Biden administration is unlikely to play the Taiwan card as hard as Trump did, but will rely more on allies to pressure the mainland.

Leaders in Western democracies tend to "limp off" in the middle of their last term, said Chang, adding that Tsai was not the core power figure within the DPP, which is why she wanted to rely on the US to consolidate her position.

"If the US no longer plays the 'Taiwan card,' Tsai's status in the DPP will weaken and the factional fighting within the party will become more intense," Chang said.

In his first two years in office, Biden is likely to focus on domestic issues, prioritizing the COVID-19 pandemic and the economy. "There is no reason to highlight the importance of Taiwan," said Chang.

In such a situation, the DPP authorities should do more to improve cross-Straits relations immediately and let future US presidents know that the DPP is "not a troublemaker," Yok said.

Taiwan experts said that Beijing has shown restraint during the most sensitive period in the past few months, and urged the mainland to maintain its strategic focus.

"When there are subtle changes in the attitude and approach of the US, the DPP will become moderate," Chang said, expressing optimism about future cross-Straits relations.

"So far, it has been up to the US to start a confrontation, but it was up to the mainland to decide how far the conflict went. So, we can expect the tension between the two sides to ease," Chang said.

"Chinese people know how to follow the trend… We just need to wait and see what happens, and this is in China's best interests," said Yok.