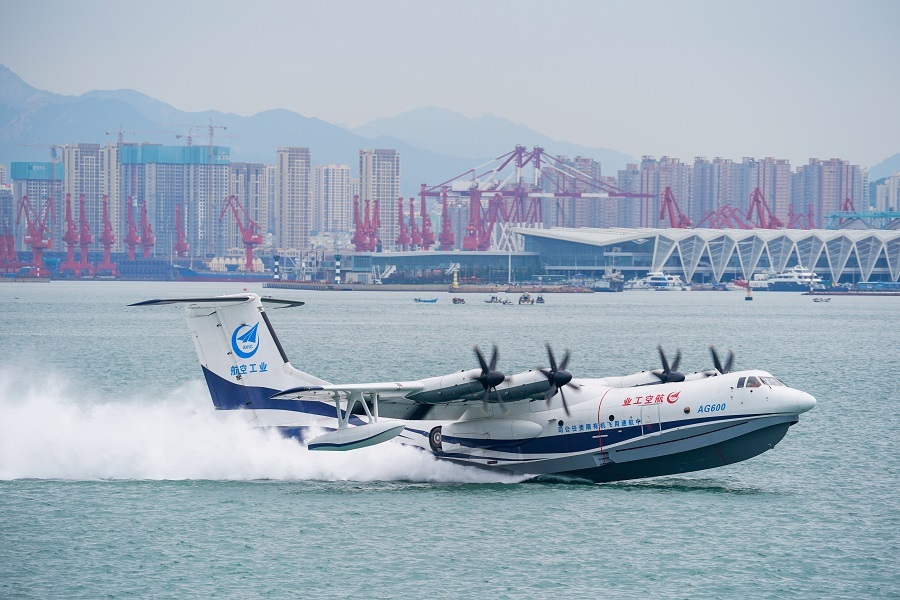 The AG600 prototype used for the test flight, operated by four crew members, took off at 9:28 am from Shanzihe Airport in Rizhao, Shandong province, and landed at 10:14 am on a designated area of the Yellow Sea off the neighboring city of Qingdao after a 46-minute flight.

The amphibious aircraft sailed on the waters and then took off at 10:18 am to fly back to Shanzihe Airport. It completed a number of test assignments during the operation, according to Aviation Industry Corp of China, the State-owned conglomerate that designed and built the seaplane.

The AG600 is China's second amphibious aircraft, after the SH-5, which was developed in the 1970s for military purposes and has been retired for a long time. With a length of 37 meters and a wingspan of 38.8 meters, the AG600 is roughly the size of a Boeing 737.

Powered by four domestically designed WJ-6 turboprop engines, it has a maximum takeoff weight of 53.5 metric tons. These specifications make it the world's biggest amphibious aircraft, surpassing Japan's ShinMaywa US-2 and Russia's Beriev Be-200.

Once in service, it will put an end to the absence of a large rescue aircraft in China and will be very useful in the national emergency rescue and disaster relief systems, said Chen Yuanxian, deputy general manager of AVIC.

The amphibious plane is one of three large-size aircraft to emerge from the nation's efforts to become a top-tier player in the global aviation sector, joining the Y-20 strategic transport plane－delivery of which began in July 2016 to the Chinese Air Force－and the C919 narrow-body jetliner, which is being flight-tested.

Development of the AG600 was approved by the central government in June 2009 and began in September that year. Tens of thousands of researchers and engineers from more than 160 domestic institutes, enterprises and universities took part in the program. Construction of the first prototype began in March 2014 and was completed in July 2016.

The seaplane made its maiden flight in December 2017 in Zhuhai, Guangdong province, taking off and landing at a local airport. Ten months later, it carried out its first takeoff and landing on water at Zhanghe Reservoir in Jingmen, Hubei province.

President Xi Jinping, who is also general secretary of the Communist Party of China Central Committee and chairman of the Central Military Commission, said after the October 2018 water-based test that it was a major achievement in the innovation efforts of the country's aviation industry. He said the seaplane will help improve the emergency rescue and disaster response systems, and encouraged those involved in the AG600 program to continue striving for its success.

The AG600 will mainly be tasked with aerial firefighting and maritime search and rescue. It also can be refitted to conduct marine environmental inspections and marine resource surveys, as well as personnel and supply transportation, according to AVIC.

The aircraft is designed for land and water takeoffs and landings and has an operational range of more than 4,000 kilometers. It can rescue up to 50 people during a maritime search and rescue mission.

For forest fire-fighting, it can collect 12 tons of water from a lake or sea in 20 seconds and use it to douse blazes over an area of about 4,000 square meters, the company said.

Compared with other rescue platforms such as helicopters and ships, the AG600 is faster and has a longer range and greater flexibility. These advantages are very useful when it comes to rapid maritime search and rescue, said Chen from AVIC.

Currently, there are two AG600 prototypes under testing－one in flight tests and the other in ground-based static tests. AVIC plans to manufacture four additional prototypes for testing, designers have said.