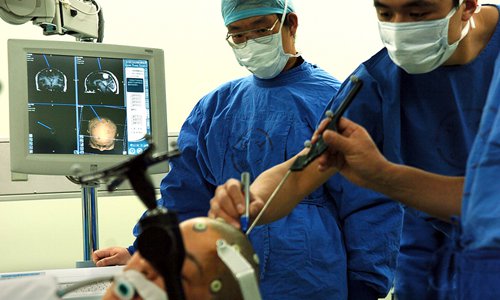 The BioMind AI system, developed by the Artificial Intelligence Research Centre for Neurological Disorders at the Beijing Tiantan Hospital and a research team from the Capital Medical University, made correct diagnoses in 87 percent of 225 cases in about 15 minutes, while a team of 15 senior doctors only achieved 66-percent accuracy.

The AI also gave correct predictions in 83 percent of brain hematoma expansion cases, outperforming the 63-percent accuracy among a group of physicians from renowned hospitals across the country.

The outcomes for human physicians were quite normal and even better than the average accuracy in ordinary hospitals, said Gao Peiyi, head of the radiology department at Tiantan Hospital, a leading institution on neurology and neurosurgery.

To train the AI, developers fed it tens of thousands of images of nervous system-related diseases that the Tiantan Hospital has archived over the past 10 years, making it capable of diagnosing common neurological diseases such as meningioma and glioma with an accuracy rate of over 90 percent, comparable to that of a senior doctor.

All the cases were real and contributed by the hospital, but never used as training material for the AI, according to the organizer.

Wang Yongjun, executive vice president of the Tiantan Hospital, said that he personally did not care very much about who won, because the contest was never intended to pit humans against technology but to help doctors learn and improve through interactions with technology.

Dr. Lin Yi who participated and lost in the second round, said that she welcomes AI, as it is not a threat but a "friend."

AI will not only reduce the workload but also push doctors to keep learning and improve their skills, said Lin.

Bian Xiuwu, an academician with the Chinese Academy of Science and a member of the competition's jury, said there has never been an absolute standard correct answer in diagnosing developing diseases, and the AI would only serve as an assistant to doctors in giving preliminary results.

Dr. Paul Parizel, former president of the European Society of Radiology and another member of the jury, also agreed that AI will not replace doctors, but will instead function similar to how GPS does for drivers.

Dr. Gauden Galea, representative of the World Health Organization in China, said AI is an exciting tool for healthcare but still in the primitive stages.

Based on the size of its population and the huge volume of accessible digital medical data, China has a unique advantage in developing medical AI, according to Galea.

China has introduced a series of plans in developing AI applications in recent years.