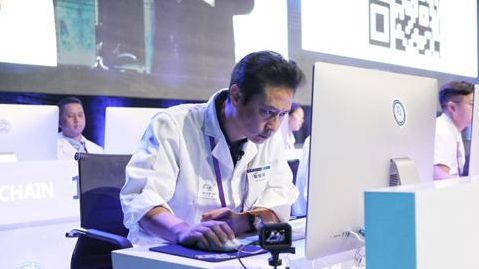 With a 20 percent higher accuracy rate, an artificial intelligence (AI) machine trumped a group of human doctors in the world’s first competition between physicians and AI in neuroimaging on Saturday.

Named BioMind, the AI can assist doctors in checking CT and MRI images, which is the first of its kind. It is jointly developed by several organizations and institutions, including the China National Clinical Research Center for Neurological Diseases.

BioMind has shown strong advantages when practicing for the competition by diagnosing more than 300 cases within 30 minutes while human doctors spend more than 10 hours to complete the same task, said The Beijing News.

There were 25 human doctors participating in the “human vs. AI” competition, which was divided into two sections. In the first part of the game, a group of 15 doctors and BioMind were required to interpret 225 CT and MRI images of intracranial tumors within 30 minutes.

During the second half of the game which also had a time limit of 30 minutes, the human team made of 10 doctors and BioMind were assigned 30 questions regarding the interpretation of CT and MRI images of cerebrovascular diseases.

The AI once again won the game with an accuracy rate of 83 percent comparing to 63 percent of the human doctors.

It is worth mentioning that the AI took about only 15 minutes to complete its task in each section while the doctors had to use up every second to solve the questions.

Gao Peiyi, the director of Imaging Center of Neuroscience of Beijing Tiantan Hospital, said that competition ended in the way they expected.

“Currently the workload is very heavy for our doctors,” said Gao. “We hope in the future, with the help of AI, doctors could have more time to do research and take care of patients.”

The AI machine BioMind is under examination and approval of the China Food and Drug Administration and is expected to be put into clinical application next year.