AIDS patients in Beijing wait only 10 days before starting treatment 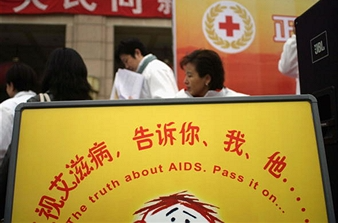 People diagnosed with AIDS in Beijing need only wait 10 days before getting effective treatment, a remarkable improvement over the 100-day wait patients had to endure in 2011,  leading experts to observe that the improvement shows the capital's resolve to care for people living with HIV.Since 2010, Beijing has spent more than 200 million yuan ($30.3 million) to fund HIV/AIDS prevention and to provide free drug treatment for people living with HIV.As of the end of October, there were 17,476 people living with HIV or suffering with HIV related illness in Beijing, said the Beijing Municipal Commission of Health and Family Planning at a Saturday press briefing.  The HIV infection rate Beijing has been contained to a "low prevalent disease" level, at 0.08 percent. Between January and October, 3,053 people in Beijing were newly diagnosed with the HIV virus, a year-on-year decline of 2.62 percent. Since 1985, 25,648 people have registered with the capital's health authorities as being HIV positive, according to data provided by the commission in a document sent to the Global Times on Saturday. More than 6,700 of them were diagnosed with HIV-related diseases, the document says.Complications due to AIDS have caused 509 deaths over the past three decades in Beijing, according to the document. The document says that the city's migrant residents make up a high percentage of those living with AIDS and the disease remains prevalent among male homosexuals. The document didn't provide statistics showing how it reached those conclusions. The Beijing Center for Disease Prevention and Control reported in December 2016 that almost three quarters of the people infected with AIDS in Beijing are migrants and 3.2 percent are from overseas.The commission's report this year shows the number of young people infected with the HIV virus also accounts for a larger percentage of those with the disease in Beijing. The document didn't detail the number of youth living with HIV in the city. Peng Xiaohui, a sexologist at Central China Normal University in Wuhan, Hubei Province,  said that the data suggests that the sex education of the city's youth is still not adequate, adding that improving awareness would curb the virus' spread among youth.Beijing has established 246 AIDS screening labs and 329 virus anti-body testing agencies. Some 99 percent of Beijing's residential communities have the ability to quickly order tests for HIV and syphilis. The death rate of HIV-related disease has been significantly reduced, and the survival rate continues to increase. HIV affection resulting from drug injection has been kept at a low level, said the document, noting that more than 88 percent of those living with the virus are receiving treatment. "The remarkably shortened waiting period and high coverage rate shows the city's enhanced efficiency and the health authorities' resolve to take care of the people living with the virus," Peng told the Global Times on Sunday.