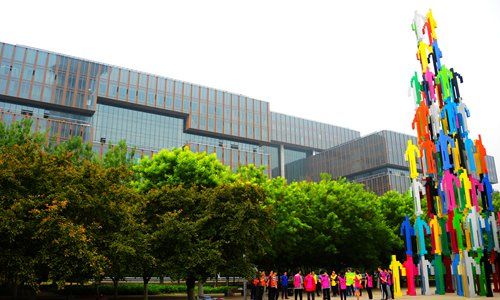 A view of the headquarters of AIIB in Beijing's Olympic Park in May (Photo: IC)

The Asian Infrastructure Investment Bank (AIIB) has 100 members after its board of governors supported new applications by three African countries, the bank disclosed on its official website on Saturday.

The 100-member mark, as well as $8.5 billion of loans granted to date, shows the "rapid development" of the China-proposed multinational lender even though it is still in a take-off period and in search of a sounder corporate governance structure.

"As China's economy soars, the AIIB as a China-led financial institution has won increasing recognition and higher expectations from the global community," Dong Dengxin, director of the Financial Securities Institute at the Wuhan University of Science and Technology, told the Global Times.

On Saturday, the AIIB announced that it had supported the applications of three African countries - Benin, Djibouti and Rwanda. The decision was made by the AIIB's board at its fourth annual meeting held in Luxembourg on Friday and Saturday.

Chinese Finance Minister Liu Kun said at the meeting that the AIIB has become "an important new member" of the multilateral development system.

Mei Xinyu, a research fellow at the Chinese Academy of International Trade and Economic Cooperation, said that the period of rapid team expansion has "passed" for the AIIB.

"Now the bank is entering a period of focusing on expanding and implementing its projects," Mei told the Global Times on Sunday.

To date, 45 projects in 18 member countries totaling $8.5 billion have been approved by the AIIB, the bank disclosed.

At a time when US-led protectionism is on the rise in the world, the AIIB will be an important platform for promoting globalization, including pushing free trade and cross-regional economic exchanges, Dong said.

"Unlike other major international investment banks whose purpose for existence was either post-World War II reconstruction or enhancing regional economic development, the goal of setting up the AIIB is to promote economic integration via connectivity. That's why overseas countries have placed great expectations on it to push globalization against the tide of protectionism," Dong said.

Liu told the meeting that the AIIB should formulate a general strategy for future development based on its own characteristics, new trends in international development and multiple needs of AIIB members.

Bai Ming, deputy director of the MOFCOM's International Market Research Institute, said that the AIIB and other regional cooperation mechanisms should "participate in each other's schemes" and "jointly study cross-regional cooperation."

Mei also said that official financing such as AIIB investment should work to attract more commercial financing in infrastructure projects.

Liu suggested the AIIB integrate its own strategies not only with its members' development strategies, but with major cooperation initiatives including the Belt and Road Initiative (BRI).

But he said that as the AIIB membership gradually increases, the range of the AIIB's financing projects will gradually expand to the whole world. Members of the AIIB that are not BRI participants might also seek financing from the AIIB based on the quality of their projects, he said.

In May, the AIIB priced its first foreign currency-denominated bonds, $2.5 billion worth of US dollar bonds, which drew huge demand around the globe, with orders nearly twice the estimated figures, according to overseas media reports.

The AIIB's fifth annual meeting will be held in Beijing in July 2020.