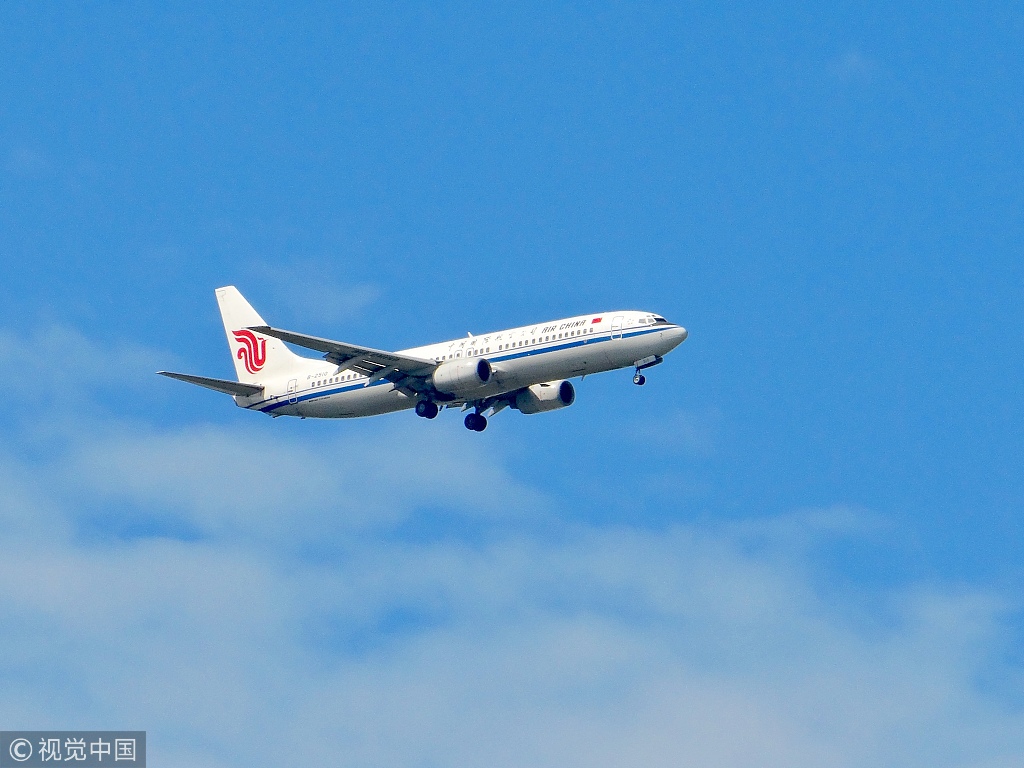 An Air China pilot crew has been suspended after the actions of a co-pilot－who was believed to be smoking－caused a plane to lose cabin pressure and drop seven kilometers before stabilizing.

Air China said in a statement on Friday that it has decided to "suspend pilot qualifications for the pilot crew responsible, and terminate their labor contracts in accordance with law".

The airline has also "seriously dealt" with related managerial staffs who are responsible for the incident, and advised the Civil Aviation Administration of China to withdraw the pilot crew's flight licenses after a full investigation is done.

The Civil Aviation Administration of China said on Friday that a co-pilot on Air China flight CA106 was believed to be smoking an e-cigarette en route from Hong Kong to Dalian, Liaoning province, on Tuesday night.

To prevent the smell from spreading into the cabin, the co-pilot, whose identity was not revealed, wanted to turn off the air circulating fan but instead switched off the air conditioning by mistake and failed to inform the pilot, the deputy director of the administration's safety office, Qiao Yibin, told a news conference.

Switching off the air conditioning led directly to the loss of air pressure, Qiao said, triggering the release of oxygen masks and forcing the plane to descend until the cabin crew found the problem and switched it back on.

Several flight tracking apps showed the flight, which left Hong Kong at 7:11 pm on Tuesday, climbing to an altitude of 10,600 meters by 7:40 pm before dropping 7,600 meters in the next 20 minutes and then gradually climbing back to a cruising altitude of about 8,000 meters.

The plane landed at Dalian Zhoushuizi International Airport at about 10:30 pm. There were 153 passengers and nine crew onboard and no injuries were reported, the Civil Aviation Administration's Northeast Regional Administration said on Thursday.

"We are still investigating the incident and will strictly punish those found responsible," Qiao said.

An unverified report began to circulate widely on social media on Wednesday, suggesting that a pilot's error caused the incident and the crew members made a "mayday" distress call to air traffic controllers.

The airline has launched a companywide safety education campaign to comprehensively eliminate security threats. It promises to learn from the mistake and maintain a "zero tolerance attitude toward safety violations."

Also at Friday's news conference, the civil aviation authority said 38 foreign airlines have stopped listing Hong Kong and Macao special administrative regions and Taiwan as independent countries, and six others have applied for a delay due to technical reasons.

The rectifications started on April 25, when the administration required 44 foreign airlines to stop referring to Taiwan, Hong Kong and Macao as independent on their websites, as such practice goes against the one-China policy.

Gu Xiaohong, deputy director of the administration's general affairs department, said that they will make sure the rectifications are finished before July 25, by which time they will make a further announcement.

Zhang Yangfei contributed to this story.