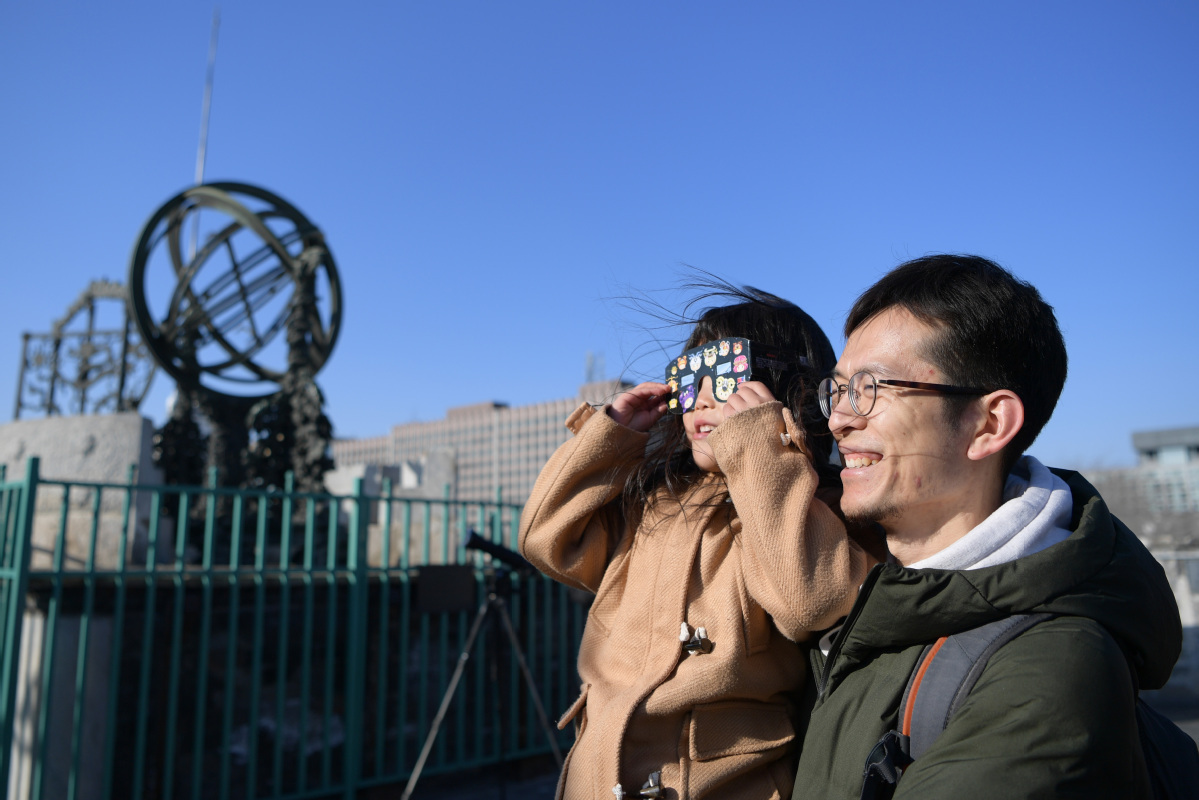 A father and his daughter watch the partial solar eclipse at the Beijing Ancient Observatory in Beijing under the blue sky on Dec 26, 2019.(Photo: agencies)

Editor's note: As China is set to complete the building of a moderately prosperous society in all respects at the end of this year, President Xi Jinping has noted that there are areas of weakness in realizing this goal. China Daily is publishing a series of stories to look at the country's efforts to tackle these weaknesses with targeted measures.

The amount of fine particulate matter called PM2.5 in the air has become a well-known gauge of air pollution in China in the past decade, making it a top concern for people on hazy days.

Now there is also more awareness of an invisible air pollutant that is also bad for their health－ozone.

With PM2.5 concentrations continuing to decline, ozone has been the only one of six major air pollutants to see densities increase last year. Reducing levels of the gas is crucial if China is to realize all of its air pollution control targets, a key part of the country's goal of building a moderately prosperous society in all respects by the end of the year.

In an article by President Xi Jinping on strengthening areas of weakness in building a moderately prosperous society that was published in Qiushi Journal on June 1, Xi emphasized environmental protection as one of the areas that needed attention to fix weak links.

"The country faces arduous air pollution control tasks in key regions, which are frequented by heavy air pollution in fall and winter. The task is also heavy for ecological conservation and remediation in the Yangtze River Basin," he wrote. There also are problems with black, malodorous bodies of water in cities and dirty and disorderly environments in rural areas, he added.

China has made marked progress on air pollution control, said Liu Bingjiang, head of air quality management at the Ministry of Ecology and Environment, and has already hit some year-end targets, but officials and experts say it still has challenges in fulfilling all of its air pollution control targets, with ozone a particularly arduous challenge.

A three-year air pollution control plan published by the State Council in 2018 says that 80 percent of days in 337 major Chinese cities should have fairly good air quality by the end of 2020, and the number of days with heavy air pollution or worse has fallen by at least 25 percent from 2015.

It also set a goal for major cities that have yet to see their average concentration of PM2.5 reach the national standard of 35 micrograms per cubic meter. By the end of 2020, such cities should reduce the density of the pollutant by at least 18 percent from the 2015 level.

The number of days with heavy or worse air pollution in all 337 major cities was down by 36.6 percent in the same time frame.

"It has been a foregone conclusion that we will realize the 2020 target on PM2.5 by the end of the year," Liu said.

But he added that increasing ozone density posed challenges for reaching the target of more days with fairly good air quality in major Chinese cities.

The 337 major cities had fairly good air quality on 79.3 percent of days in 2018. However, a heat wave that hit some provincial-level regions in the third quarter of 2019 caused a sharp increase in ozone density, which resulted in marked increases in the number of days with too much air pollution and "added difficulties" meeting the 2020 target, Liu said.

Sunlight and high temperatures can trigger chemical reactions in oxynitride pollutants and volatile organic compounds, or VOCs, which often are components of petroleum fuels, to form ozone. While the ozone layer helps shield Earth from harmful ultraviolet radiation, even relatively low amounts of the gas can damage lungs and result in shortness of breath, and Liu said emissions of oxynitrides and VOCs remain high in China.

He also said adjusting the structures of industry, energy consumption, transportation and land use to further improve air quality was an increasingly arduous task.

The dominant position of heavy industry in the industrial structure and the country's reliance on coal for energy and roads for transportation have yet to be changed fundamentally, Liu said.

The ministry launched a VOC-control campaign in June to tackle ozone pollution.

By the end of July, 168 teams had been dispatched to 58 cities with high VOC emissions and serious ozone pollution to help local authorities reduce emissions, ministry spokesman Liu Youbin said at a news conference in August.

Ning Miao, a researcher at the Chinese Academy of Environmental Planning, said VOC emissions have yet to be "effectively curbed" in China.

In 2015, 25 million metric tons of man-made VOCs were emitted in China, far more than in the United States or the European Union, she said.