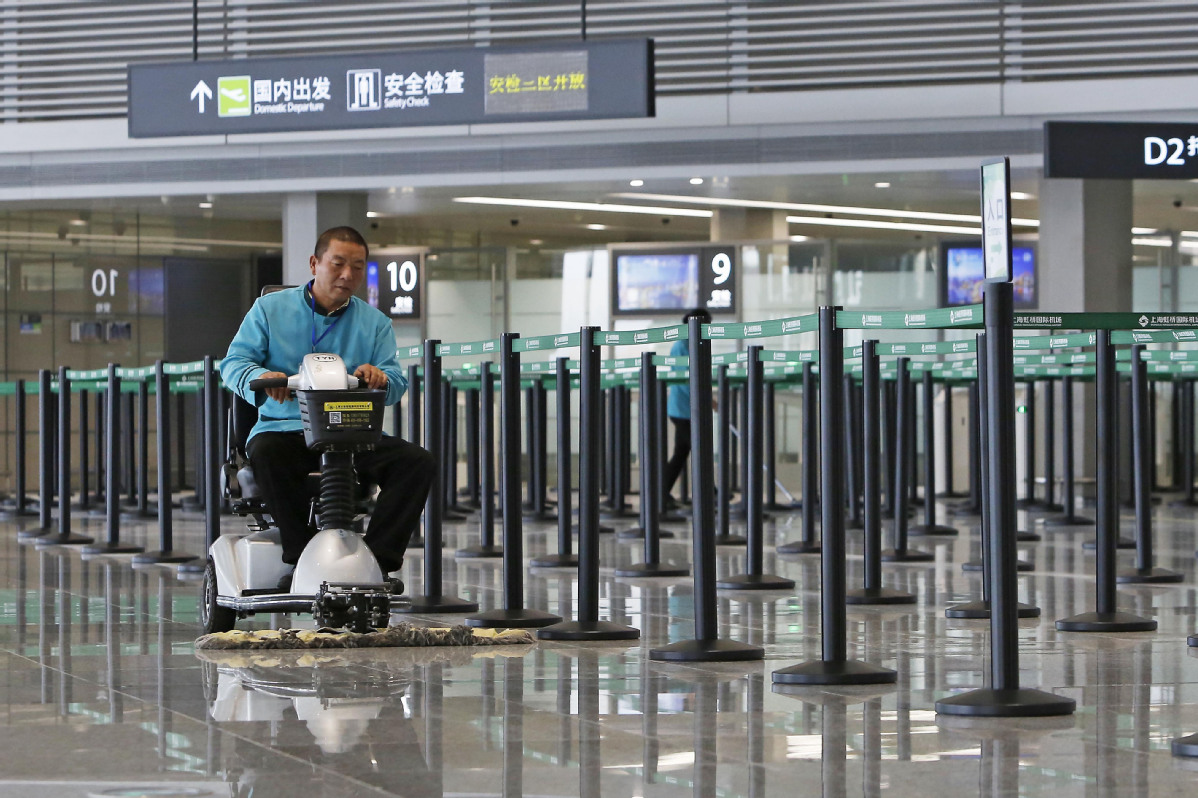 A staff member cleans the floor and makes final checks at Terminal 1 of the Hongqiao International Airport in Shanghai on Tuesday, before it reopens after a three-year renovation. (Photo: China News Service/Yin Liqin)

Terminal 1 at Shanghai's Hongqiao International Airport will become the first in the country to offer completely automated check-in and boarding services for domestic departures on Oct 15 after more than three years of renovation.

The terminal will serve domestic flights run by Shanghai-based Spring Airlines, along with international flights by other airlines.

A total of 28 self check-in machines and 18 sets of self baggage drop counters will take over the boarding process for passengers on Spring Airlines' domestic flights, according to Zhang Xiaojun, an official from the Shanghai Airport Authority.

The boarding process is complete after the passengers pass the security check, which is also automated. It includes data analysis and facial recognition, which will take about 12 seconds to complete. Facial recognition and ID card scanning for boarding will take only seconds.

"After scanning ID cards and completing face recognition at the eight machines for self security check, passengers reach the final stop of self boarding," Zhang said.

Wang Zhijie, president of Spring Airlines, said that compared with traditional checkin procedures, the self-service system saves passengers from having to rush between different counters for various services.

But Wang said the company will offer help to passengers if they are not familiar with the self-service system.

The automation facilities are part of a terminal refurbishment project that started in December 2014. The project also includes the renovation of the terminal's traffic facilities and surrounding infrastructure, according to Dai Xiaojian, vice-chairman of the Shanghai Airport Authority.

In addition to the new check-in and boarding services, the building is also equipped with 11 washrooms, nine nursery rooms, 10 wheelchair accessible restrooms, and high-speed Wi-Fi and cell phone battery charging.

"One of the most difficult parts throughout the renovation is that the terminal's flights operated as normal," Dai said.

He said the terminal will be capable of handling 10 million passenger trips a year after the renovation.

Jiang Yunqiang, general manager of Hongqiao airport, said: "We understand passengers will find the new procedures take time to get used to. But self-service is the trend for global airports, and Hongqiao airport will take all the necessary measures with airlines to help travelers understand the process in advance."