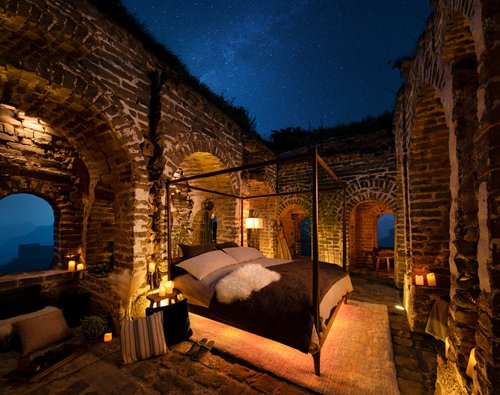 Airbnb's design of the sleepover site at the Great Wall, with a master bedroom and bathroom. Photo: courtesy of Airbnb The Great Wall at night.

"The competition is closed," reads the registration page of Airbnb's "Night at the Great Wall." The Great Wall is one of the 28 sites the company is offering for its latest contest, which also includes the Great Barrier Reef, Fenway Park and Paris Catacombs.
"The launch of the activity was based on communications with local authorities. We understand and respect the opinions of relevant authorities and the public, and we have decided not to move forward with this event," read a statement sent to the Global Times on Wednesday.
However, the cultural relics department of Beijing's Yanqing district, where the event was supposed to have been held, said it never received any application of the activity nor does it approve any guesthouse program on the Great Wall, according to a statement released by Yanqing's publicity department through Sina Weibo.
Yanqin's cultural relics department does not support such activities on the Great Wall as they are inconsistent with the spirit of protecting cultural relics, the statement said.
The open-air sleepovers, previously scheduled for early September, were only open to people over 21 years old. They were required to file a 500-word essay to compete for the activity offered to four people and their guests.
"Approving such activities will send the wrong message that commercial activities which create safety hazards to cultural heritage sites are allowed," Kong Fanzhi, former director of the Beijing Municipal Administration of Cultural Heritage, told the Global Times on Wednesday.
Kong also questioned the repercussions of such an activity, saying people's awareness of protecting cultural heritage would not improve, not to mention the huge safety hazards the activity itself creates.
"With the use of lighting and other electrical facilities, the activity would create safety hazards on the Great Wall. Sewage and other waste will also have an impact on maintaining the site," Kong said.
Chinese Net users also challenged the activity following its announcement on August 2. They questioned the activity's legitimacy and said that they are confused as to how "sleeping on the Great Wall for one night" could help protect the site and increase people's awareness of protecting cultural heritage.
China's regulation on the protection of the Great Wall bans activities that would take or relocate bricks and plants on the Great Wall, or those that include installing facilities or equipment that are irrelevant to the protection of the site.
Such activities, as well as unapproved construction on the Great Wall, would lead to a fine of up to 500,000 yuan, according to the regulation implemented in 2006.
Commercial activities must serve the purpose of protecting cultural heritage, Kong stressed.