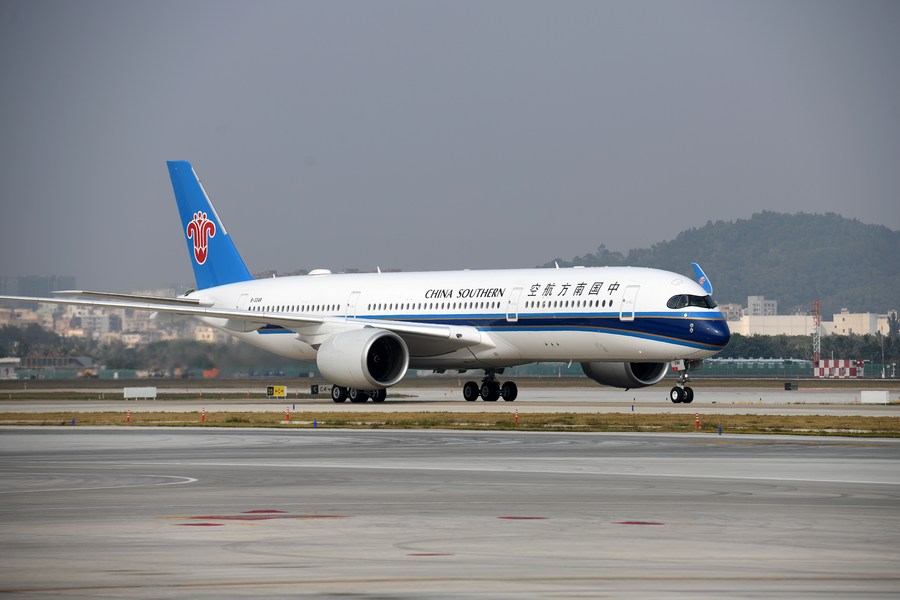 An Airbus A350-900 arrives at the Baoan International Airport in Shenzhen, Guangdong province, Jan 6, 2022. [Photo: Xinhua]

Airlines have announced they will increase the number of scheduled international flights soon, drawing widespread attention.

China Eastern Airlines, one of China's three major airlines, said on Monday that it will resume a number of international flights from the end of October, including flights between Shanghai and Bangkok; Hangzhou and Tokyo; Qingdao and Seoul; and Qingdao and Dubai.

During the upcoming winter and spring season, China Eastern plans to operate 108 scheduled international flights along 42 routes every week.

China Southern, another major airline in China, said last week it will resume scheduled international flights at the end of this month, including Guangzhou-Jakarta, Dalian-Tokyo, Guangzhou-Dubai and Guangzhou-Manila.

According to Li Xiaojin, a professor of aviation economics at the Civil Aviation University of China in Tianjin, international passenger flights are a very important source of income for airline companies, especially larger airliners.

Before the pandemic, about 10 percent of air travelers were international passengers, but they contributed nearly 30 percent of the revenue of the civil aviation industry, he noted.

Data released by the CAAC in August last year showed that China operated 230 international passenger flights every week, about 2.15 percent of the volume seen in 2019.

Policies have been released to boost the sector's recovery from the COVID-19 pandemic.

In May, the State Council, China's Cabinet, issued a notice to boost the economy, including the orderly resumption of international passenger flights.

In June, China eased the quarantine policy for inbound travelers. According to the latest epidemic control protocol, inbound travelers will be placed under isolation to undergo medical observation at designated sites for seven days followed by three days of home health monitoring, reducing the quarantine time from 21 to 10 days.

In August, the CAAC shortened the suspension time for international flights if confirmed cases were found onboard.

Liang Nan, director of the transport department of the CAAC, said during a news conference in June that the administration is holding discussions with some countries on gradually increasing international passenger flights.

The administration is working under the coordination of the joint prevention and control mechanism of the State Council to carry out the resumption of flights to fulfill the needs of overseas students and people involved in international exchanges looking to return to their home countries, said Xu Qing, deputy director of the department, at a news briefing in July.

She also noted that the effort takes into account the evolving pandemic situation, the optimization of recent prevention and epidemic control measures, and the improvement of the ability of local regions to accommodate international flights.