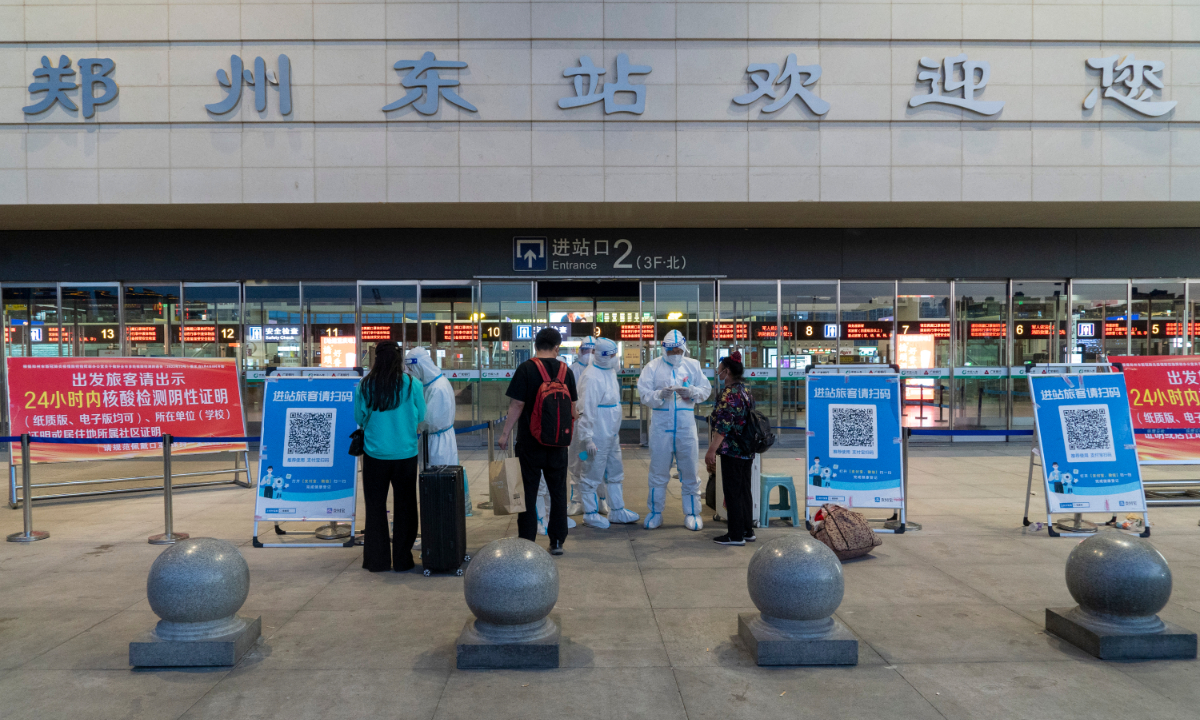 A number of COVID-19 cases have been detected through on-site nucleic acid testing when travelers arrive at airports, train stations and highway exits, a method recently adopted across China to address the escalated risk brought about by increasing population flow as the National Day holidays approach.

Observers said although the policy consumes more local anti-epidemic resources, it enables localities to detect epidemic risks before they lead to large outbreaks. Thus in the long term, its benefits far outweigh its disadvantages.

On-site testing is adopted to ensure no emergence of sizable domestic outbreaks before and after the National Day holidays, the National Health Commission (NHC) said on September 8 at a press conference. It is a key method to detect cross-region imported cases, the NHC noted.

Testing labs have been set up at each train station, airport and highway exit in multiple cities including Shanghai and other places in Northeast China's Jilin Province.

East China's Jiangsu Province adopted the same measures recently. A worker at the Suzhou epidemic command center told the Global Times on Sunday that on-site testing for visitors from regions that have high- and medium-risk areas is mandatory and other visitors can do it on a voluntary basis. Besides on-site testing, travelers need to present test results taken within 48 hours.

As the National Day holidays approach, more people from provinces out of Jiangsu have called to ask about epidemic-related policies, according to the worker. On Thursday, Jiangsu's Xuzhou city found one case through on-site testing at a train station.

"If their histories of travel are normal, they are free to leave after taking the test. If their records are abnormal, they should also take an antigen test," an employee from the highway exit team at a highway exit at Yiwu, a city in East China's Zhejiang Province told local media.

The Yiwu's service point has increased the on-site testing staff to 30 from 20 to carry out testing for arrivals who had visited other provinces and other cities in the previous seven days. On September 20, one case was detected at the Longwan international airport of Wenzhou in Zhejiang.

An anti-epidemic expert surnamed Zhang told the Global Times that on-site testing guarantees the normal operation of society when the epidemic has yet to end and it allows for the detection of cases at an early date to nip emerging epidemics in the bud.

Some other health experts said this measure can properly address the highly contagious Omicron variants. They said one case infected with Omicron strain BA. 5.2, for example, can infect 18 people on average and a small number of infected patients even show COVID-19 symptoms before their nucleic acid test is positive.

Receiving tests at their destinations could help to check if they happened to encounter COVID-19 risks during their journey. Confined spaces such as planes pose great transmission risks, Zhang said.

It seems like testing on arrival brings more pressure to local anti-epidemic departments since they need to mobilize medical resources and manpower, but in the long term, its benefits far outweigh its costs, especially when the holiday is about to come, Zhang said. If one traveler is tested positive, the local anti-epidemic department can find and quarantine the case within 24 hours, he explained.

Observers believe that travel during the National Day holidays will necessarily increase epidemic risks, but the risks should not be exaggerated due to the nation's mature, precise and dynamically adjusted COVID-19 epidemic and control policies, which ensure the detection, quarantine and treatment of cases in a timely manner.

Data provided by travel agencies showed that although travel during the National Day period is expected to be reduced compared with previous years, there has still been a short-term substantial rise in travel bookings ahead of the holidays.

To reduce transmission risks, multiple cities urged local residents to stay put and reduce cross-province and cross-city travel. Both Beijing and Shenzhen require people who return to the city before and after the National Day holidays to take one test within 24 hours.

The situation across the country is complicated and grave, with 159 confirmed and 601 asymptomatic cases registered on Saturday, according to data compiled by the NHC.

Zhang said testing on arrival may become a long-term measure so people can travel, and there can also be a balance between epidemic control and economic activity.

A green health code has become a standard travel permit in China, but it has caused lots of inconvenience as each province has its own version. The country has announced plans to enforce mutual recognition of codes nationwide. If the system can be recognized across the country, testing on arrival may not be necessary, Zhang said.