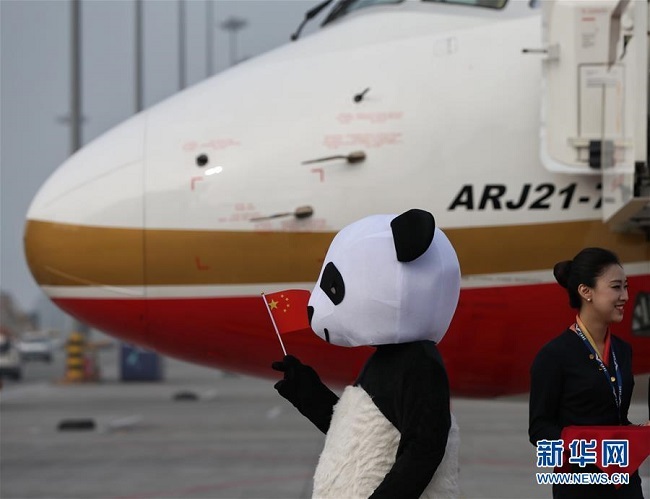 A staff member in a panda costume waves a Chinese national flag at the Chengdu Shuangliu International Airport in Southwest China"s Sichuan province to celebrate the China-made ARJ21 put in operation. (Photo: Xinhua)

Chongqing Jiangbei International Airport also had better performance during the same period, rising to fourth place from ninth at the end of last year.

COVID-19 had a bigger impact on the aviation industry in the first six months. Though some airports began to resume their capacity in May, bigger declines still remained compared with the same period last year, the newspaper said.

If the epidemic could be better in control in the second half, Beijing, Shanghai and Guangzhou airports could experience a strong rebound. In the long term, there is no fundamental change in the roles the three airports play in domestic aviation market.

The top 10 airports handled a total of 128 million passengers in the first half of 2020. In terms of growth rate, the top 10 saw a decline of 52.68 percent, slightly lower than the national 54.2 percent drop.

According to figures released by the Civil Aviation Administration of China, in the first half of the year air passenger numbers came in at 150 million, equivalent to 45.8 percent of the volume seen during the same period last year.

Last month, Chongqing Jiangbei Airport resumed as best among the top 10, recording a decline of 19.7 percent year-on-year, also the only one which saw a decline lower than 20 percent. Except for Beijing Capital International Airport, the remaining airports reported narrowing declines.