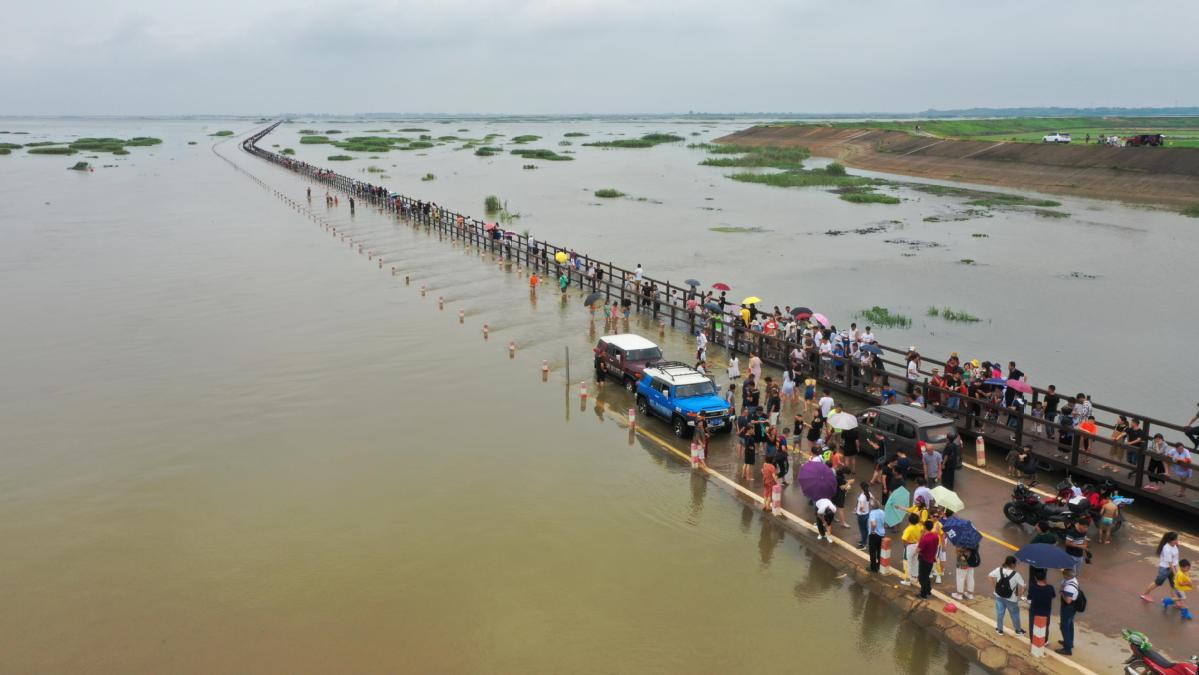 As downpours continue to batter vast stretches of the country, especially areas in the south, leaving at least 121 people missing or dead, forecasters have warned of a grim flood control situation in the north, which hasn't seen major floods for years, from precipitation that is expected to be much heavier than normal.

So far this rainy season, southern parts of the country have suffered long-lasting, wide-ranging rains. Some areas had only brief relief from sustained rainfall, according to the National Meteorological Center.

At 6 am on Friday, the center canceled a blue alert, the lowest in the country's four-tier color-coded weather warning system, it issued the day before for torrential rain. Before that, it had issued an alert for heavy rainfall for 32 consecutive days.

A new blue alert, however, came only 12 hours after the cancellation, warning that heavy rainfall with precipitation of up to 15 centimeters will engulf areas in 10 provincial regions, including the west of Zhejiang province and the south of Anhui province in the 24 hours starting from 8 pm on Friday.

The alert was renewed on Saturday and then upgraded to yellow, the second-lowest level of alert, on Sunday. The latest alert shows that even larger areas in 13 provincial regions are expected to be hit by downpours from 2 pm on Sunday to 2 pm on Monday.

This time, the total precipitation will be up to 23 centimeters. To make it worse, the rainfall will be accompanied by severe convective weather, which is characterized by strong winds, hail, thunderstorms and brief but heavy rainfall. In the most extreme circumstances, the hourly precipitation in the affected areas will exceed 7 centimeters, the center said.

In June, meteorological administrations issued over 43,000 early warning messages. The number of messages for rainstorms and thunder each increased by about 43 percent compared with the average of the total issued for the same month in the past three years, according to the China Meteorological Administration.

The Ministry of Emergency Management said that, as of Friday, over 19.3 million people in 26 provincial regions had suffered from floods. A total of 121 people were missing or dead and the direct economic losses from the flood disasters reached over 41.6 billion yuan ($5.89 billion).

Following the incessant downpours, water levels in the middle and lower reaches of the Yangtze River, as well as Dongting Lake and Poyang Lake, have been rising. Sixteen rivers in Jiangxi and Anhui provinces were struck by floods on Saturday, according to the Ministry of Water Resources.

The ministry had upgraded its emergency response for flood control from level four, the lowest, to level three on Saturday.

It said coordinated operation of reservoirs in the upper reaches of the Yangtze will be carried out to reduce the amount of water flowing into the Three Gorges Dam, which saw the arrival on Thursday of the first flood in the country's longest watercourse this year, and relieve flood control pressure in the middle and lower reaches of the river.

The National Meteorological Center said the latest alert is also issued for downpours in some provincial regions in the north, including Shandong, Heilongjiang and Jilin.

According to the Ministry of Water Resources, the rainfall in these northern regions is just the beginning of long-lasting rainy weather that may result in big floods in some of the major rivers in the north.

"Forecasts and analyses by the meteorological departments show that generally there will be greater precipitation in both southern and northern China from July to August. Rain will frequent some areas both in the south and the north. But the rain band in the north will gain the upper hand," the ministry said.

Among areas to be covered by the rain band, some places in Shanxi, Henan, Shandong and Heilongjiang provinces and the Inner Mongolia and Xinjiang Uygur autonomous regions are forecast to see their precipitation increase by 30 to 50 percent compared with previous years.

The coming rain may result in major regional floods in the Songhuajiang and Liaohe rivers, the middle reaches of the Yellow River and southern parts of the Haihe River. The rain, together with melted snow, may also cause flooding in some areas in Xinjiang, the ministry said.

He ordered detailed precautionary measures to be rolled out.

There has been no major flood in northern China for years. While officials and the public lack experience in flood control, most flood control projects have not been tested by floods.

"Possible unfavorable conditions should be brought into full consideration," he said.