CHINA Algae and grapes are China's new weapons against desertification

Algae and grapes are China's new weapons against desertification 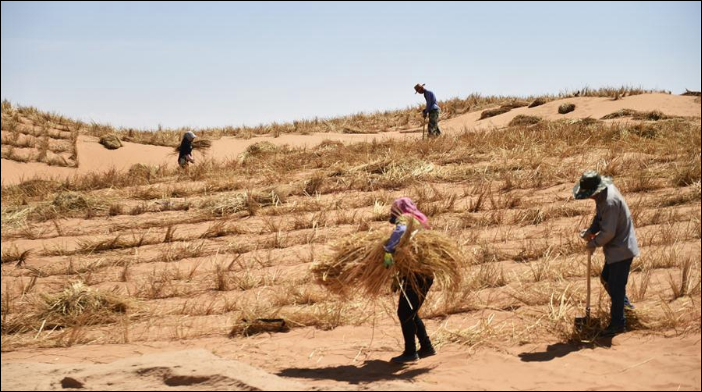 After successfully cultivating grapes in the desert, China is combating desertification by adopting advanced scientific methods to boost sustainable farming in the region, a senior official maintained.

Trials for reviving algae, moss, and lichen are underway in an attempt to control the spread of desert terrain and also boost agriculture in the Tengger desert at Shapotou district in Ningxia Hui Autonomous Region.

This fragile layer of lichen, algae, and moss is known as the cryptobiotic crust and it binds the sand and soil to the ground. Climate change and overgrazing over the years destroyed the topsoil, resulting in massive desertification around the world.

“We extract algae, moss and lichen from various sources and cultivate them in nearby water bodies. Then we spray these micro-organisms on the sand dunes to stabilize the sand,” Zhang explained. These micro-organisms also help boost the soil's fertility.

More than one-third of China's territory is threatened by desertification, affecting nearly 400 million people. The official estimate claims desert in the country is expanding at the rate of 2,100 square kilometers every year, swallowing vast tracts of fertile land in the process.

This widespread desertification has displaced thousands of families whom the government terms as “ecological refugees.” To help them, a series of rehabilitation programs have been initiated. “In the 1980s we helped these communities to farm grapes and cultivate vegetables in the desert,” Zhang said.

"As a part of a livelihood generation initiative, experiments with growing grapes, apples, corn and wheat in the fringe desert area were carried out. “We involved many experts, and after a successful trial, villagers are growing grapes at a large scale,” Zhao Jinlong, a senior engineer with SDRES told CGTN.

Shapotou alone cultivates around 350 hectares worth of grapes. Nearby Zhongwei City, which is facing the worst impacts of desertification, is growing grapes in approximately 600 hectares of land.

Corn and wheat crops are cultivated on a rotational basis to maintain the soil's fertility.

In a bid to control desertification, the government initiated the Shelterbelt Development Program in 1978 to form a ‘Green Great Wall' of 35 million hectares worth of trees, covering 700 km across northern China.

Climate change, overgrazing and a lack of water have been cited as the primary reasons behind the region's rapid desertification. “Grazing has been banned since 1956, and it continues,” Zhang added.

In the 1960s, the expanding desert threatened to destroy the Baotou-Lanzhou Railway, a crucial route that links northern China to northwestern regions.

The rail route is almost 1,000 km and crosses through the Tengger Desert near Zhongwei City in the Ningxia Hui Autonomous Region. The dunes often engulf the railway tracks, forcing authorities to initiate desert control methods.

The Institute of Desert Research of Academia Sinica (IDRAS), with the help of the government and local communities, use checkerboards to control the sand. The straw checkerboards are one square meter in size and made with wheat or rice straw.

These boards cover a vast area around the railway tracks and control the flow of sand.

“These traditional methods to control desertification are slow. Algae is a fast way to green the desert, and we have carried out a series of successful trials,” Zhang added.

“However, the only problem is that the new method is expensive. We estimate the cost will down once we scale up the algae desertification control operation.”