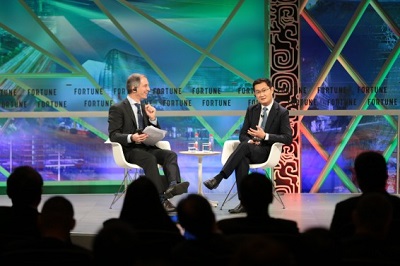 Guangzhou (People's Daily) - Ma Huateng (Pony Ma), Chairman and CEO of Tencent Holdings said Wednesday he has different opinion with Alibaba Group Chairman Jack Ma on “empowering others”, suggesting that his rival behaves like an all-powerful landlord that can raise the rent any time it wants.

“Jack Ma has mentioned ‘empowering others’, I want to take the opportunity here to highlight some of our differences.” Pony Ma explained, speaking Wednesday at the Fortune Global Forum in Guangzhou, “Tencent’s empowering is decentralized. We don’t provide a mall, we will not rent out this counter to allow you to do business.”

“Empowering others” is an important part of Jack Ma’s well-known success philosophy. Earlier that day, he mentioned the idea again, as he was responding to the question of how does he think of the competition between Alibaba and Tencent, on stage at the Fortune Global Forum.

“We are rivals, but I don’t hate them(Tencent). Don’t hate your rival, respect them, learn from them. Pony and I are friends. Our companies are competing, but we don’t hate each other.”

The two Ma’s run two of the largest Internet companies on earth now. Besides being locked in a payment war, they are competing in almost every field. Pony known as a low-key business leader said it is sort of bothering for him. “We are competing with Ali in this area too? Kinds of bothering”, he said with a smile Wednesday.