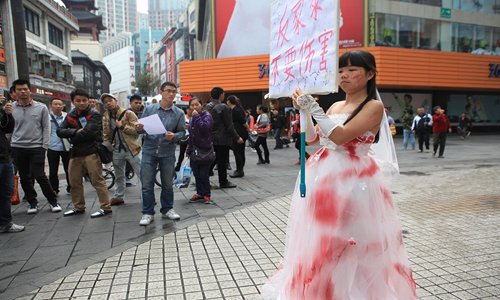 A performance artist wears a wedding dress splattered with red spots and holds a board that reads “Anti-domestic violence, no harm”at a street in Shenzhen, South China’s Guangdong Province, on December 10, 2014. (Photo: Global Times)

In the proposal, the association suggests public security departments should list and record domestic violence cases that 110 receives separately from others, and urge the frontline law enforcement personnel to deal with these cases correctly.

It is necessary for frontline police officers to receive training related to domestic violence, and to distinguish between domestic violence and ordinary “family disputes,” said legal experts reached by the Global Times.

“Some police officers regard domestic violence cases as minor quarrels between the couples and just try to smooth things over,” said lawyer Zhang Jin, deputy director of the marriage and family committee under the Beijing Legal Association. “That ignores the potential dangers for the weaker side – usually the women.”

Zhang mentioned Dong Shanshan, a woman who was frequently beaten and eventually killed by her husband in Beijing in 2009. She reportedly called the police eight times but did not receive any useful help.

The federation’s proposal, therefore, could be positive in prompting police stations to set up a team specifically to deal with domestic violence cases, Zhang told the Global Times on Friday.

The team could consist of trained police officers who clearly know how to make a record, how to help the victims conduct injury identification and how to issue a warning to or even arrest the culprits, which is quite different from dealing with ordinary public security cases, Zhang said.

The general domestic violence situation in China has improved in the past five years since the first ever Anti-domestic Violence Law took effect in March 2016, legal experts and observers told the Global Times.

“But we still have a long way to go in eliminating domestic violence and pursuing real gender equality in marriage and families,” Zhang said. How frontline police officers regard and deal with domestic violence cases after receiving calls for help are critical in this process, she added.

A total of 1,214 people died in the 942 cases related to domestic violence that media reports covered between March 1, 2016, when the Anti-domestic Violence Law came into effect, and December 31, 2019, according to statistics compiled by Equality, a Beijing-based non-governmental group focusing on gender-based violence in China.