The hull construction of the world's largest purely electric-drive cruise ship has been completed in a shipbuilding industrial park in Yichang, Hubei province, in a step toward providing more options in the green growth of transportation on the Yangtze River. 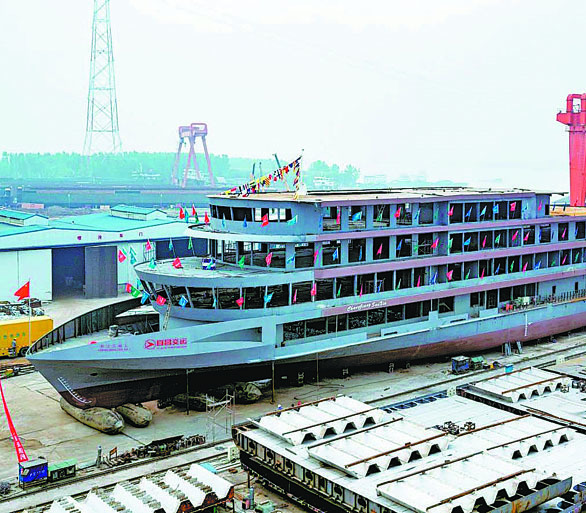 Construction of Changjiang San Xia 1, a purely electric-drive cruise ship, is underway in June at Yichang Shipbuilding Industrial Park in Yichang, Hubei province. The vessel's hull has been completed, and workers are now outfitting the ship. [SONG JINGE/FOR CHINA DAILY]

Workers are now outfitting the ship, which is expected to play a role in boosting the local tourism industry.

The Changjiang San Xia 1, which is 100 meters long and 16.3 meters wide, will mainly operate on the Yangtze, the longest river in the country. The ship is expected to make a trial voyage at the end of the year.

Tan Qisheng, chairman of Yichang Xinhui Ship Repair Co, which is building the ship, said the vessel has a designed capacity of more than 1,300 passengers.

"The ship's functions will include hosting conferences, receptions, wedding ceremonies, parties, banquets and theatrical performances, as well as other cultural activities," Tan said.

The ship will have a power drive battery with a capacity of 7,500 kilowatt hours－equivalent to the total drive battery capacity of more than 100 all-electric vehicles－as well as other advanced technologies and equipment, said Tan.

The ship, which Tan said will have the most advanced intelligent technology in the world, is on the Ministry of Industry and Information Technology's list of high-tech ship research projects, and is among the Ministry of Transport's pilot projects.

Changjiang San Xia 1 is also the first all-electric ship in the world to adopt a system of high-voltage charging and low-voltage power supplement.

Unlike traditional electric vessels, the ship will use clean hydropower energy, and it can operate more than 100 kilometers on one charge, helping save 530 metric tons of fuel oil every year.

The ship's use can also help reduce emissions of harmful gases by 1,660 metric tons annually, improving the level of green transportation in Yichang, which is in the middle reaches of the Yangtze River.

The vessel is also expected to help in promoting the green development of the Yangtze River shipping industry, which has received increasing attention in recent years.

In 2020, four ministries, including transportation and ecology, issued a joint plan to curb ship and port pollution, urging comprehensive improvements in pollution prevention and acceleration of the green development of the shipping industry along the Yangtze River Economic Belt.

Yichang Shipbuilding Industrial Park, which was built in 2010, has become the largest inland special engineering ship production base in Hubei province, which is a transportation hub in the Yangtze River basin. The industrial park built and repaired a total of 116 vessels in 2020.