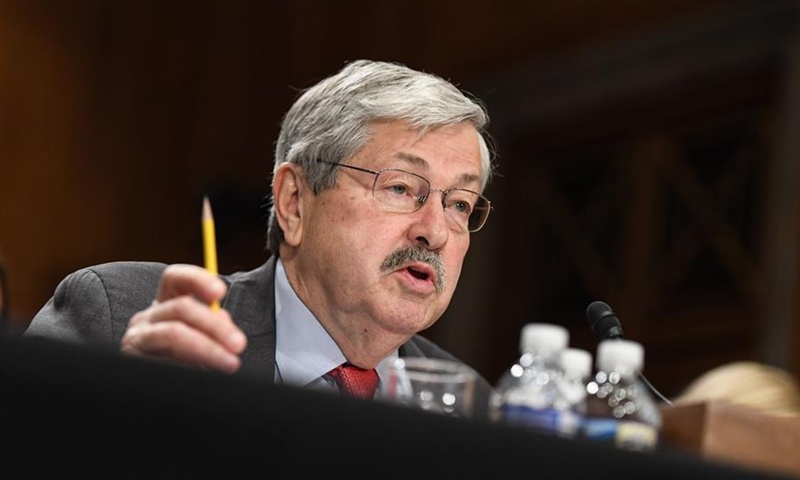 The US Embassy to China on Monday confirmed to the Global Times that Ambassador Terry Branstad will retire and leave Beijing in October after three years as the US envoy to China, when China-US relations underwent unprecedented tensions and confrontations. Chinese analysts said Branstad's departure shows that despite his personal intention to soothe tensions, he failed to repair the increasingly rocky ties.

US Secretary of State Mike Pompeo thanked Branstad for his contributions on Monday on Twitter, saying Branstad was chosen for his decades-long experience dealing with China, which made him the best person to "represent the Administration, and to defend American interests and ideals in this important relationship."

The US Embassy to China confirmed with the Global Times on Monday via an email that Branstad would retire.

At an embassy internal event, the ambassador said he was "proudest of our work in getting the Phase One trade deal." "We have made significant progress and we will not stop pressing for more," the embassy's email said.

Branstad also noted that during his tenure, he visited 26 Chinese provinces, municipalities and autonomous regions, and would have visited all of them if it were not for the coronavirus.

Branstad confirmed his decision with President Donal Trump last week. Chinese analysts believe as the move is a personal protest against the Trump administration's China strategy that frustrated him because he wanted to repair and push forward bilateral ties.

One of the most recent interactions he had with China was an article in his name being rejected by the People's Daily, which found the article "seriously inconsistent with the facts." The rejection was hyped by Pompeo, who maliciously attacked Chinese media organizations.

Analysts said the article was more likely sent upon orders from the US government, and Branstad did not want to be manipulated by hawkish politicians like Pompeo, or be the scapegoat of the row. The article incident might be the blasting fuse of Branstad's retirement, analysts said.

In August, Branstad visited Shanghai and met with Mayor Gong Zheng, discussing a range of economic and trade issues. The meeting drew wide attention as a sign of China and US exploring positive channels to communicate despite escalating disputes in trade, technology, diplomacy, and even education.

Media reported that Branstad's home state of Iowa has close links with China. He reportedly had a long-term friendship with Chinese President Xi Jinping that dates back to 1985. Branstad was called "an old friend of China" by the Chinese Foreign Ministry when he was nominated in 2016.

But analysts noted that as US ambassador, Branstad's personal connections with China could not help him overcome the broader trends that have been shaking China-US relations over the past years. When Washington uses a hawkish strategy toward China, he is at the forefront of all conflicts.

A Chinese analyst who had talked to Branstad in person spoke highly of Branstad, calling him modest and mild, and respects the people and culture of the country he is stationed in. "My impression was he wanted to push forward exchanges of the two peoples and lubricate bilateral relations. But as the US government representative in China, the ambassador's words and activities are inevitably restrained by Washington," Li Haidong, a professor at the Institute of International Relations of the China Foreign Affairs University, told the Global Times on Monday.

The unprecedentedly strained China-US relations also frustrated the ambassador, prompting him to seek another path in his political career, Li said, noting as an influential figure locally, it's possible that Branstad will run for senator or governor.

Changing ambassadors amid bilateral difficulty and uncertainty suggests the US' passive attitude in this diplomatic relationship, Li said.

Considering uncertainties in the bilateral relationship and the US election in November, it could take some time before his successor is chosen, Li said.