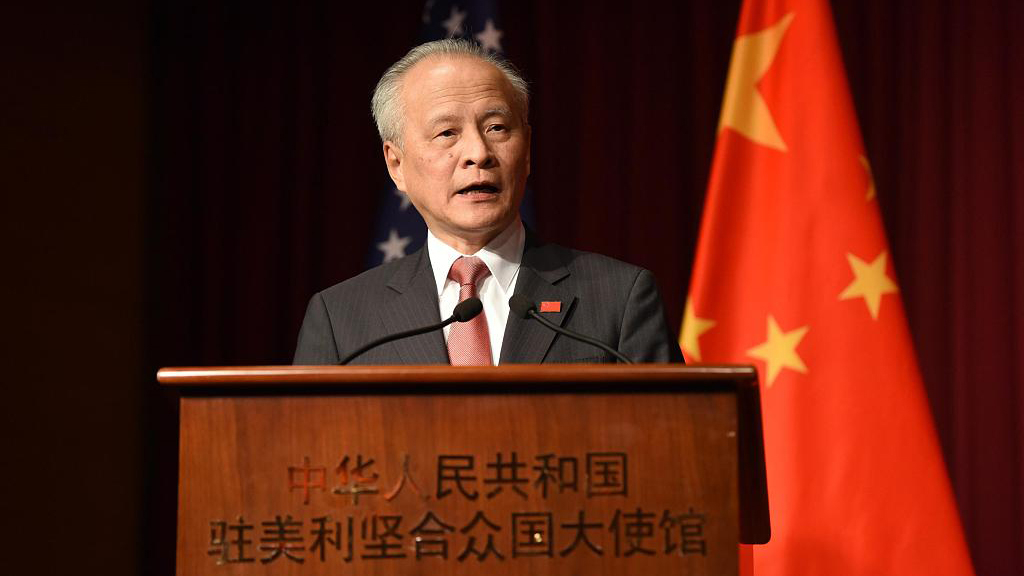 Chinese ambassador to the US Cui Tiankai addresses a reception at the Chinese embassy in Washington, February 6, 2019. (Photo: CGTN)

Chinese Ambassador to the United States Cui Tiankai said on Wednesday China will open its door wider to the US and seek more cooperation, while inviting Washington to join the upcoming Belt and Road Forum in Beijing.

Cui said China and the US are the world's two largest economies, and both will enjoy greater opportunities and be more prosperous as long as they are open to each other.

The Chinese official made the remarks at a reception at the Chinese Embassy in Washington to mark the 40th anniversary of establishment of diplomatic ties between China and the United States as well as the Chinese New Year.

Cui was quoted as saying the US is the "most welcome" to join the forum, which will be held in April, without directly commenting on the current trade disputes.

No better alternative than cooperation

Cui warned that the so-called "decoupling" of the two countries would be disastrous for both economies and the world economy at large. The world is undergoing profound changes and it needs the two countries to work together more than ever before, he stressed.

He said history has proven that cooperation serves the interests of both countries and people from both sides.

He went on to say, "Our people need us to work together. As our common interests grow, we should continue to expand and deepen our cooperation on the basis of the achievements of the last four decades."

The People's Republic of China and the United States formally established ties on January 1, 1979. Over the past four decades, the progress of China-US ties has been nothing but staggering.