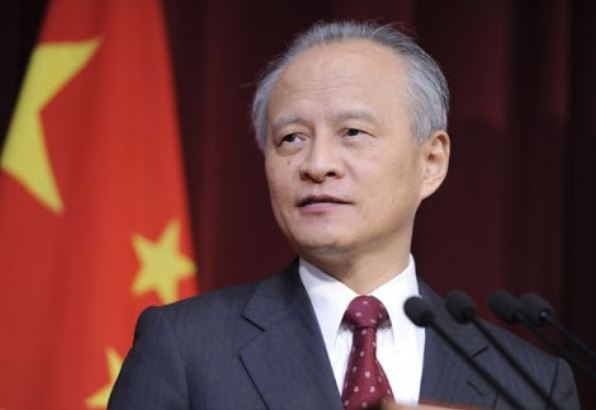 Washington (People’s Daily) -- Chinese Ambassador to the United States Cui Tiankai published an article in USA Today on February 28. Here is the full text of the article:

The Spring Festival is a time for families to get together and celebrate the advent of spring in China. But this year is different. The novel coronavirus outbreak in early 2020 has brought the travel peak season to a halt and put the whole country under strain. A chill is in the air.

Facing a completely new virus, China has responded on an epic scale. From the top leadership to grassroots, from medical professionals to ordinary people, the Chinese people have united and displayed extraordinary fortitude and devotion to fight the disease. In a race against time, a Great Wall of disease control has been put in place quickly, and no pains are being spared to save lives.

Since the outbreak, President Xi Jinping has chaired five meetings of the Standing Committee of the Political Bureau of the Communist Party of China (CPC) Central Committee to map out the disease prevention and control work. Premier Li Keqiang traveled to Wuhan, the epicenter of the outbreak, to offer support to the people fighting on the front line. China has taken the most comprehensive and rigorous measures of disease prevention and control, many of which go well beyond the requirements of the international health regulations and guidelines of the World Health Organization (WHO).

Wuhan, a vibrant metropolis with 11 million people, has been put under an extraordinary and decisive lockdown. In a matter of 10 days each, two well-equipped hospitals have been built with 2,500 beds to accommodate severely ill patients. Stadiums and convention centers have been transformed into mobile cabin hospitals with tens of thousands of beds for patients with mild symptoms.

Medical professionals, like our everyday heroes, have braved the challenge in a noble spirit of sacrifice. Heart-warming acts are everywhere to be seen: To save time for work, women doctors have had their long hair cut and men have shaved off their hair. To save medical supplies, they drink less or even no water so that they will remove the protective suits and use the bathroom less often, as the suits have to be disposed of once taken off. Men and women in uniform, and doctors and nurses from other parts of China, are rushing to Hubei province to extend a helping hand.

Medical supplies factories are back in production from their Spring Festival holidays, and ordinary people are staying home to prevent a possible spread of the virus.

In an unprecedented fight against the disease, many people have stayed upbeat and confident. They share jokes and punchlines on social media, and a humorous meme with the caption "Finally, couch potatoes are making a contribution to society" is a typical display of their readiness to do their part to prevail over the disease.

As a responsible country, China has also erected a Great Wall of disease prevention for the world. We have been releasing disease-related information in an open, transparent and responsible manner. We have kept updating the WHO about the latest developments and shared with it and other countries the full sequence of the coronavirus genome.

As WHO Director-General Dr Tedros Adhanom Ghebreyesus said: "The Chinese government is to be congratulated for the extraordinary measures it has taken to contain the outbreak," and "in many ways, China is actually setting a new standard for outbreak response."

Actions speak louder than words. As a result of our forceful measures, the cure rate is steadily rising. The people cured have noticeably outnumbered the fatalities. Canadian epidemiologist Bruce Aylward, who heads the WHO mission team to China, said on Monday that China has rolled out "the most ambitious, agile and aggressive disease containment efforts in history."

The virus is ruthless, but people are not. In this monumental fight, we have been touched by the acts of compassion and kindness from around the world. We are taking on the fight by ourselves, but we are not fighting alone. Donations and best wishes are pouring into China from all around the world, including from many American companies, organizations and people. We deeply appreciate your gesture of solidarity and goodwill, and we take it to heart. We are ready to repay the kindness shown to us by offering assistance to countries and regions where the epidemic is taking a toll. This is what we can and should do.

To our regret, however, while we are fighting the visible virus from nature, we are also under attack from invisible, man-made viruses out there. Some people have put their political agenda above public interests and common sense, and they are desperately spreading "political virus."

Turning a blind eye to the fact that the Chinese people have been effectively mobilized under the CPC leadership and that party members are leading the work, these people are provoking ideological biases and clamoring for unnecessary overreactions. While we are doing whatever we can to fight the disease, they are doing whatever they can to stir up panic and even instigate racial discrimination and xenophobia.

At the same time, some conspiracy theorists are disseminating "information virus" by fabricating and spreading rumors, such as unfounded claims that the virus emerged from a Chinese biolab. All this goes against the universal values of morality and humanitarianism.

To be frank, compared with the coronavirus, these invisible viruses are more poisonous and harmful, as they are attacking the leading force of the epidemic control in an attempt to break down our line of defense. They are simply the accomplice of the visible virus we are fighting.

Disease knows no borders. This unexpected epidemic reminds us again how vulnerable mankind is and how essential it is to help each other in the face of difficulties. As important members of this global village and the world's two biggest economies, China and the United States need to cooperate to address global challenges and problems. The interests of the 1.7 billion Chinese and American people and of the 8 billion world population are at stake.

Amid the epidemic, an encouraging line is circulating on China's social media: No winter will last forever; no spring will skip its turn. Let's keep up the fight and stay confident, and together we will celebrate the advent of spring very soon.