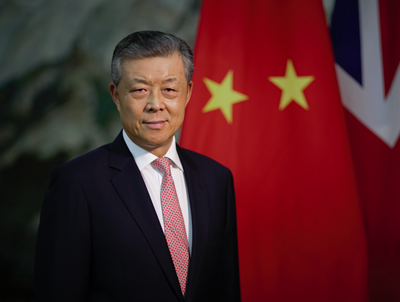 China's Ambassador to the United Kingdom Liu Xiaoming has strongly rebuked calls from the United States for an inquiry into the origin of the novel coronavirus in China, saying such requests are politically motivated and are not borne out by science.

Speaking from a web event hosted by the China-Britain Business Council, Liu said it was regrettable that some politicians in the UK and other nations have joined the US in making allegations of a cover-up regarding the source of the outbreak.

Liu's comments come after US Secretary of State Mike Pompeo claimed to have evidence that the novel coronavirus originated in a lab in Wuhan. Pompeo did not provide any evidence to back up these allegations, and multiple scientists and experts including those from the World Health Organization, support the theory that the virus was first transmitted to humans from animals.

Liu said that China's detractors are moved by ulterior motives and hope to "pass the buck for their lack of response" and efforts to contain the virus in their countries.

"It is a game of blaming and scapegoating, and it's not helping the international response," he said.

Liu said that it is up to scientists, rather than politicians, to determine where, when and how the virus started its spread.

"Politicians should focus on how to mobilize countries to fight against the virus, but we should trust scientists, doctors, and experts in their search for the origin of the virus," he said.

Liu said that, while some British politicians have joined the US in "spreading rumors and slander" and "stigmatizing China" during the global pandemic, he does not believe these allegations reflect the stance of the UK government.

"When you say there is a lot of anti-China rhetoric, I do not believe they represent the UK government position," he said. "And they do not represent the broader consensus among businesses in the UK."

Liu said that UK Prime Minister Boris Johnson had reaffirmed his government's commitment to stronger relations with China through two telephone conversations and several exchanges of letters with Chinese leadership over the past few months.

"Prime Minister Johnson said in his briefings that because of the early identification of the virus, because China has shared this amount of information very quickly and at an early stage, that the world has had time to study and research a vaccine," Liu said.

Liu said that, regrettably, some politicians in the UK have adopted a "Cold War mentality" and have compared China to the former Soviet Union.

"Such talks are a political virus, and if they go unchecked, they will poison China-UK joint efforts, and even international solidarity, just while it is needed the most in the battle we are fighting," Liu said.