Ambassador Zhang Jun: President Xi's Speech represents a major advance for the spirit of the Fourth World Conference on Women 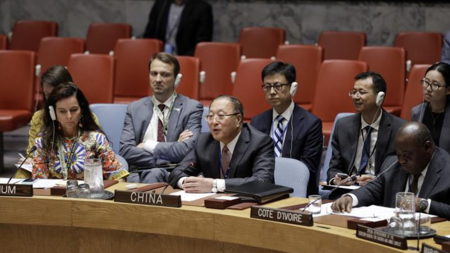 New York (People's Daily)- Zhang Jun, the permanent representative of China to the United Nations, said on October 1 that President Xi Jinping made an important speech at the opening ceremony of the United Nations High-level Meeting to Commemorate the 25th Anniversary of the World Women’s Council in Beijing. President Xi’s speech points out the challenges for gender equality and contributes Chinese wisdom to the global cause of women’s development. He announces practical measures, focusing on women’s well-being and demonstrating a big country’s sense of responsibility. The speech represents a major advancement for the spirit of the Fourth World Conference on Women.

In the morning of the same day, the United Nations held a high-level meeting to commemorate the 25th anniversary of the Beijing World Women’s Conference, and specially invited President Xi to attend the opening ceremony and deliver an important speech. After the meeting, Ambassador Zhang gave a detailed interpretation of President Xi's speech in an interview with the media.

He said, over the past 25 years, inspired by the Fourth World Conference on Women, people have developed a deeper awareness of gender equality. The status of women all around the world has improved significantly. Meanwhile, due to different national conditions, levels of development and cultural traditions, progress worldwide in gender equality and women's empowerment is not balanced. In many countries and regions, women still fall victim to armed conflicts, poverty, gender discrimination and crimes of violence. The COVID-19 pandemic has also impacted global women’s development. Women have a stronger aspiration for a better life and expect world leaders to give personal attention and inject confidence and impetus into the cause of gender equality.

In the speech, President Xi highlights the new challenges of the pandemic and points out that it is particularly important to address the special needs of women and deliver on the Beijing Declaration and Platform for Action. President Xi proposes that we need to minimize the impact of COVID-19 on women, strive for genuine gender equality, ensure that women advance at the forefront of our times, and enhance global cooperation in advancing women’s development. These propositions, with identified goals and actions, reflect the major concerns and demands of women and offer China’s good practices of women’s development as a reference for the global women’s cause.

In the speech, President Xi takes stock of China’s progress in women’s development which reflects a people-centered approach. As the host country of the Fourth World Conference on Women, China is a practitioner and pioneer in women’s development. China has the largest population of women in the world. As a Chinese saying goes, “Women hold up half the sky”. Equality between men and women is a basic state policy in China and deeply rooted in people’s hearts.

Over the past decades, Chinese women have made tremendous contributions to national development, and witnessed significant changes in their status. Chinese women are actively involved in the decision making process of the country and society and leading a life of more fulfillment and happiness. Women account for half of the people lifted out of poverty and over 40 percent of the employed population in China. Gender equality is fully achieved in compulsory education. The average life expectancy of Chinese women has risen to 79.4 years from 36.7 years when the People’s Republic was founded. Tens of thousands of women have been at the forefront in the fight against COVID-19 and hailed as heroes in harm’s way. Special measures have been taken by the Chinese Government to ensure employment and health for women and to reduce the financial burden on women-led enterprises. It needs to be pointed out in particular that female diplomats make up more than one-third of China’s diplomatic personnel. Their excellence and dedication are greatly commended.

China gives strong support to global women’s development. Achieving gender equality requires political commitment and concrete action. President Xi announces that in the coming five years, China will donate another 10 million dollars to UN Women, and will continue to fund the UNESCO Prize for Girls’ and Women’s Education. President Xi also announced that China has implemented all proposals put forward in the Global Leader’s Meeting on Gender Equality and Women’s Empowerment five years ago, including a donation of $10 million to UN Women, building 100 “health projects for women and children” and 100 “happy campus projects”, and providing vocational training for 130,000 women in  developing countries. Women and girls in many countries have benefited from these commitments and actions, thus fulfilling their dreams for work, education and a better life. This fully demonstrates China’s active contribution to global women’s development and China’s firm support for the United Nations.

Zhang said, “The cause of women’s development is an ongoing process, and actions for gender equality are always needed. No matter how the times and the international situation may change, countries’ commitment to promoting gender equality and women’s aspiration for better lives will not change. We look forward to gathering again with delegates all around the world in 2025 to jointly create a new chapter for the great cause of women’s development.”