CHINA America's policies on China should be based on reason and reality: Ambassador Cui

America's policies on China should be based on reason and reality: Ambassador Cui 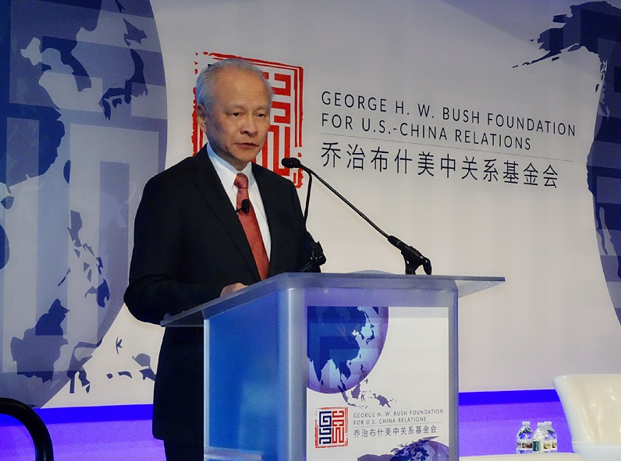 Chinese Ambassador to the United States Cui Tiankai delivered a keynote address at the Bush China Conference in Houston, US, on October 28, 2019. (Photo: People's Daily)

Washington (People’s Daily) -- Chinese Ambassador to the United States, Cui Tiankai, delivered a keynote address at the Bush China Conference held by the George H.W. Bush Foundation for US-China Relations Monday in Houston saying he hoped that America's policies on China will be based on reason and reality.

Cui said that over the past four decades, China-US relations have made incredible progress with close economic ties and robust people-to-people exchanges. “As we share strong interests in a peaceful and prosperous world, our need for collaboration and cooperation have become unparalleled in our history. However, today's China-US relationship is overshadowed by clouds rarely seen in the last 40 years.”

He said the trade war is still taking tolls on both sides. Extreme rhetoric such as "new Cold War," "decoupling" and "clash of civilizations" are swirling around, and some have even snuck in the so-called "whole-of-government approach," which portends to the erosion of ties across the board.

“This should sound the alarm for us, and it begs the fundamental question: Is America willing to live in peace and pursue common development with China, a country with a different culture and a different political system? As more emerging countries are on the horizon, what strategic choice would America make?” Cui asked.

He pointed out that over the past 70 years, China has blazed a path of socialism with Chinese characteristics, which has transformed the nation and benefited the whole world.

“If there is any secret to our success, it is that we have always taken the people's aspiration for a better life as our goal and focused our efforts on making China a better country. That said, we never develop ourselves to outstrip others, nor do we do so at their expense. We always believe in win-win cooperation, and that's why we have initiated building a community with a shared future for mankind.

“We know full well that no hegemony will ever last. China's goal is to become a better self, not to displace others. We have not the slightest interest in becoming a hegemon and putting the world under our thumb”, Cui said.

However, he continued that no matter what China does, there will be a variety of absurd talk springing up in the US. “It seems that demonizing China has become the new ‘politically correct,’ so much so that people cannot but be shocked by the degree of their outright biases and double standards. Let's get all this right now.”

Cui emphasized that China never withdraws from international organizations as it pleases, nor does it default on contributions to the United Nations budget, still less will it play fast and loose with the facts or ride roughshod over other countries. China's Belt and Road Initiative has greatly advanced international infrastructure construction and business cooperation and created new opportunities of common development and prosperity for other countries. China has not resorted to war as an answer to terrorism; instead, it has chosen education and training to help people affected by extremist and terrorist ideas return to normal life.

He said Taiwan, Hong Kong and Xinjiang are all parts of China's territory, far away from the United States, so why on earth is China's bottom line challenged time and again on the issues concerning its sovereignty and territorial integrity?

Cui stressed that the Communist Party of China, as China's governing party, has been a faithful representative and guardian of the interests of the Chinese people in the march of the past century. “To draw a line between the Party and the people is to challenge the entire Chinese nation. Claiming to welcome a successful China on one hand, and defaming and working to overthrow the very force that leads the Chinese people towards success on the other, have you ever seen anything more hypocritical and outrageous than this?

“I hope that America's policies on China will be based on reason and reality, and not be led astray by bigotry and misjudgment. Hatred, xenophobia and isolation are never part of any civilization in the world. Civilization denotes a luminous path of mankind, while these negative ideas are only associated with darkness. Their believers and advocates, though perhaps holding high positions, hardly belong to a civilized world.”

Cui also touched on the trade talks between the US and China saying, “The talks made substantial headway about two weeks ago. We hope that China and the US will continue their dialogue and negotiation on the basis of equality and mutual respect and come to a win-win situation. This is the very principle that we should follow in our relations. Economic integration and common development represent an unstoppable trend. In both countries, people are turning their back on the talk of "decoupling" because to decouple from China is to decouple from opportunities.”

The George H. W. Bush Foundation for US-China Relations, as the first organization named after an American President and dedicated to China-US relations, has become an important bridge of friendship and cooperation between both countries. Cui also praised President George H.W. Bush’s strategic vision and said his historic contributions deserve to be remembered and carried forward by both peoples.

“I firmly believe that with the joint efforts of the Foundation and insightful people in both countries, China-US relations will enjoy sound and steady growth, rain or shine, to the greater benefit of the people of both countries and the whole world,” Cui said.