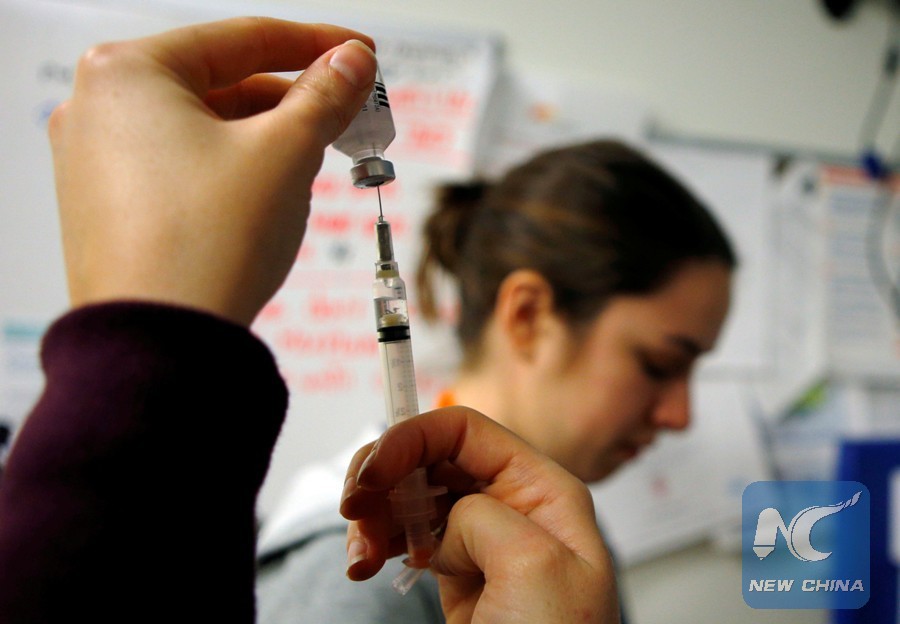 American and Chinese scientists developed a new nanoparticle vaccine that could effectively protect mice against influenza A virus, according to a study published on Monday in the Proceedings of the National Academy of Sciences.

Unlike the seasonal flu vaccines that must be updated each year and run the risks of mismatching against pandemic influenza strains, universal flu vaccines can induce broad and effective protection against a wide range of influenza viruses.

The researchers from Georgia State University, Georgia Institute of Technology, Emory University and China's Henan Normal University resorted to peptides, which are compounds consisting of two or more amino acids linked in a chain.

The nanoparticles mimic the biological cues of viruses and initiate danger signals that activate immune responses, according to the study.

Each double-layered nanoparticle has a core made of peptides from nucleoprotein (NP), an internal influenza protein that has been found to produce cross-protection against influenza virus by inducing T-cell immune responses.

The nanoparticle also has an outside coating made of four peptides from the ectodomain of the influenza A M2 protein (M2e), a promising target for universal flu vaccines. The M2e sequences came from human, swine and avian influenza strains.

"The adaptive immune system includes B lymphocytes mediating antibody responses and T lymphocytes mediating cellular responses," said Wang Baozhong, senior author of the study and associate professor in the Institute for Biomedical Sciences at Georgia State. "Our novel nanoparticles trigger immune responses of both immune branches. We have seen the synergistic role of the two branches in providing broad cross-protection against a wide range of diverse influenza virus challenges after vaccination with these layered peptide nanoparticles."

The peptide-only, double-layered nanoparticles are delivered by skin vaccination with a dissolvable microneedle patch. The microneedle patch is syringe-free, painless, thermostable and self-applicable, according to Wang.

This vaccine approach could also be used to develop vaccines for other pathogens and cancers, Wang said.