YINCHUAN, June 15 (Xinhua) -- Dennis Needham has been teaching in northwest China's Ningxia Hui Autonomous Region for 17 years. Despite the COVID-19 outbreak, he has been able to return to work just as the campus enters its most beautiful time of the year. 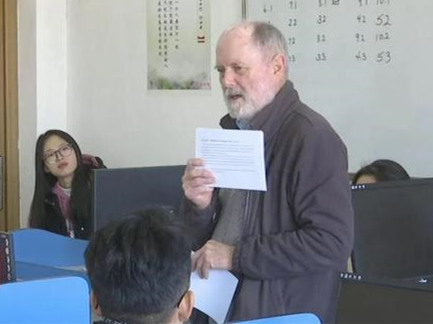 "The self-isolation was a quiet time for me and offered me many opportunities to prepare some options for the coming uncertainty of the new semester," he said.

He has become more fond of strolling on the campus to take in the fresh air, flowers and trees.

In 2003, he came to the Ningxia Institute of Science and Technology in the city of Shizuishan, where his silver hair earned him the nickname "Grandpa Dan" from his Chinese students.

"It's a term of respect. I would go along with that," Needham said, smiling.

As the COVID-19 outbreak wanes in China, the campus has also gradually seen a return to daily routines since March. To reduce the infection risk, Dan and other teachers have been required to prepare lessons and teach on campus, but students should attend online classes from their homes.

Needham teaches about 150 students this semester and 12 online classes involving Western cultures, international trade and English each week. A screen apart, he was quite satisfied with the students' performance.

"I couldn't see what they were doing while having classes. But I had many comments and messages during the class. My fingers were moving very rapidly to type back to them. They have been very prompt and faithful in sending me their homework assignments," said Needham.

"During this semester, they are certainly realizing how their cellphones can be used very productively -- not just for socializing," he said, jokingly.

Productive classes are based on exhaustive research and preparations. During the quarantine, Needham spent most of his time reading and preparing lessons. He was communicating with the students for about two weeks before the semester actually began.

"Grandpa Dan is so nice. He encouraged us to exercise every day and reminded us to protect ourselves. He tried very much to make his classes as attractive as possible. I want so badly to be back on campus. We all miss him very much," said Ma Wenyan, a junior student.

Needham has taught over 5,000 students over the years including some national English speaking contest winners. In his spare time, he volunteers to teach rural students English and buys them books.

In 2008, Needham received the Liupan Mountain Friendship Award, an award of the Ningxia regional government for foreigners who contribute to the local development.

There is a wall of carvings -- about three meters high and 30 meters long -- on the campus showing individuals and special group events. Needham's portrait was also carved on it.

In 2015, he was honored as one of the five outstanding teachers on the university's 30th anniversary.

"The biggest award I won was receiving appreciation from people. Maybe a letter I get from students saying thank you," he said. "All of the staff here have been very supportive and cooperative and very understanding. I'm looking forward to more years here."

When he was offered an opportunity to take a flight back to the United States right after the outbreak, he refused. "I had no need to return. I was comfortable here and did not want to leave the work I was doing."

He had a WeChat group set up by Ningxia's foreign affairs office, which provided useful information about the ongoing epidemic. Staffers in his university and community also cared about his well-being and delivered food and face masks.

"We were limited in how many times we could go in and out of the yard, and we had to wear a mask. The regulations that were placed upon us here were reasonable, and the virus has been handled, I think, effectively," he said.

"When you come here to a country, you come to be a part of it, not to have them follow your ways of thinking and doing it your way. So all in all, it's been a difficult situation for many people around the world. But I'd have to say here, I felt comfortable and safe," he added.

As COVID-19 is fading, Needham is thinking more about his students. "Teaching online is an effective way, but we're looking forward to seeing our students face to face when they return for the new term."