In the morning hours of January 25, Xi Jinping, General Secretary of the Communist Party of China (CPC) Central Committee, arrived on the 10th floor of the new media mansion of the People's Daily and participated in a video call with a People’s Daily journalist who works as the first secretary of a village in Luanping County, Hebei Province. 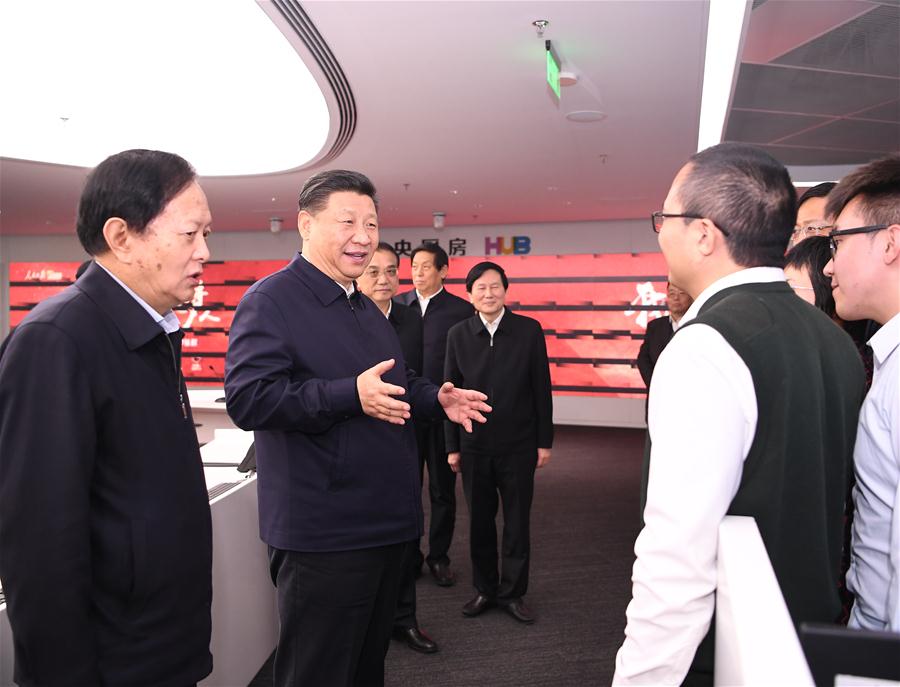 “I specifically mentioned the first secretaries in my New Year’s speech. I’d like to extend my sincere greetings to all first secretaries, grassroots-level officials, and to the millions of people throughout the country. I wish everyone a happy Chinese New Year in advance.”

This happened as Xi led a group study session of the CPC Central Committee Political Bureau at the People’s Daily. Xi paid his first visit to the new media mansion in 2016 when he took an inspection tour at the CPC flagship newspaper.

The latest visit was the 12th group study session of the CPC Central Committee Political Bureau, the first of 2019, which focused on all-media era and integrated media development.

Xi stressed efforts to boost integrated media development and highlight mainstream values in public communication so as to consolidate the common theoretical foundation for Party members and the people to unite and work hard. The move will provide spiritual strength and public support to help achieve the two centenary goals and the Chinese dream of national rejuvenation, Xi said.

At 9:15 am, led by Xi, members of the Political Bureau of the CPC Central Committee first visited the People's Daily Digital Communication Corporation on the 9th floor of the new media mansion.

Xi viewed a photo gallery featuring the evolution of People’s Daily bulletins, including one installed in the newspaper’s old office in Wangfujing. “I used to stop at the bulletin to read the newspaper of that day.” Xi recalled.

Xi stopped in front of a photo showing deputies and delegates who read news on an electronic bulletin as they gathered in Beijing for the annual two sessions.

Xi also visited the broadcast control hall where he was presented with an introduction of the electronic newspaper bulletins.

As a platform for integrated communication, the digital bulletin shows not only the pages of People’s Daily, but also stories from its subsidiary newspapers and publications like Qiushi Journal, an influential magazine devoted to policy-making and theoretical studies.

The bulletin also provides access to xuexi.cn, a learning platform owned by the Publicity Department of the CPC.

The People’s Daily introduced its new layout on January 1 which now features more photos, charts and abstracts. Its digital bulletins have also been upgraded to mesh with the renovation. Readers can tap the screen to get video recommendations, along with pictures and animation related to the news they are reading. The new features make every story more vivid and interactive.

“The newspaper bulletin is getting more informative with the input of audio and video,” said Li Baoshan, President of the People’s Daily.

After the presentation, Xi and his entourage studied the distribution map of the electronic newspaper bulletins. 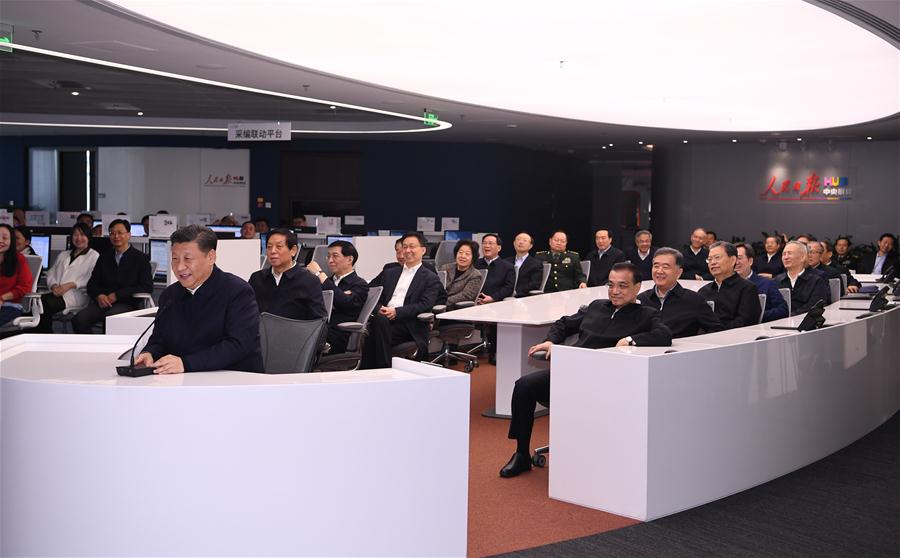 Xi Jinping, general secretary of the Communist Party of China (CPC) Central Committee, talks online with a reporting journalist and the first secretary of a village in north China's Hebei Province on poverty alleviation work at the People's Daily in Beijing, capital of China, Jan. 25, 2019. (Photo: Xinhua)

At 9:30, Xi and his entourage moved to the People’s Daily all-media platform.

Xi video called a journalist with the People’s Daily on secondment to Luanping County and encouraged journalists and editors to work at the grassroots level, especially the front line of poverty alleviation, to get trained.

“I often read it,” said Xi when listening to the report by an editor from Xiakedao, a social media account covering political news run by the overseas edition of the People’s Daily.

Xi stressed that Party newspapers and periodicals should strengthen the development and innovation of their means of communication. 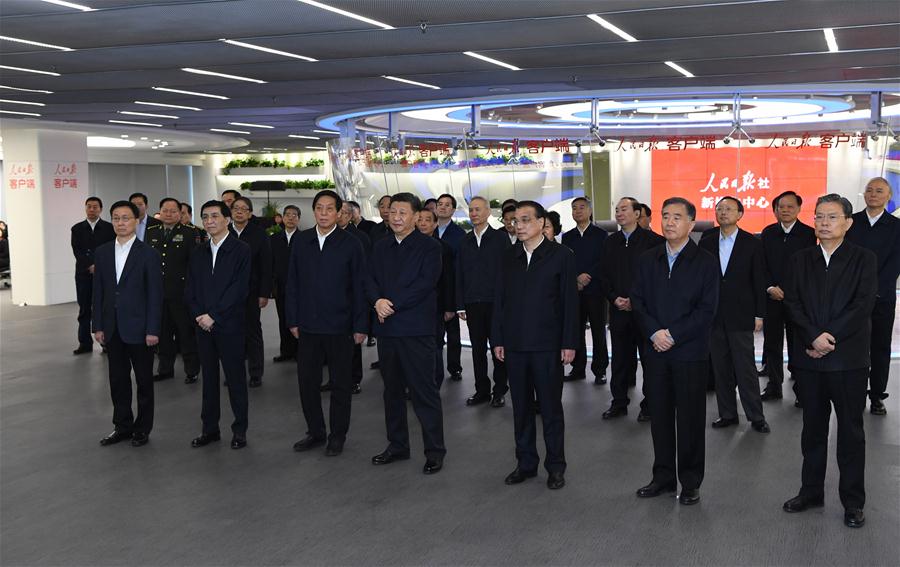 Xi Jinping, Li Keqiang, Li Zhanshu, Wang Yang, Wang Huning, Zhao Leji and Han Zheng watch a new media products show after they listened to a report on the development of microblog, WeChat and other forms of new media at the People's Daily in Beijing, capital of China, Jan. 25, 2019. (Photo: Xinhua)

At 9:50, Xi and his entourage went to the People’s Daily New Media Center on the 14th floor. The group listened to the report on the development of new media presented by director of the New Media Center Ding Wei.

China has nearly 170 million Internet users under 19, called the "aborigines" of the Internet who make up more than one-fifth of total Internet users. People's Daily reaches out to the young generation with fresh and innovative new media products, which won applauses from Xi.