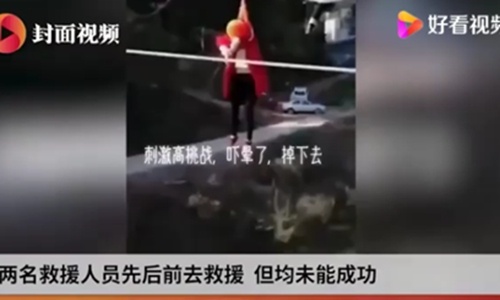 An unconscious woman hangs in the after falling from a tightrope at an amusement park in Jiguang town, Southwest China’s Sichuan Province. The woman is being treated for her injuries. (Photo: Screenshot of Haokan Video)

At least three amusement parks across China have been temporarily closed due to failures of facilities that caused injuries and frightened visitors amid Chinese New Year (CNY) holidays, local governments told the Global Times on Thursday.

At a park in Jiguang town, Southwest China's Sichuan Province, a woman fell from a tightrope walking facility over a river on Tuesday. A chilling video clip being spread on Twitter-like Weibo showed the woman, hanging in the air with a safety belt, screaming and later fainting with fear. More worrying was that the woman fell into the river minutes later as she suddenly slid from the loose safety belt.

The accident is under investigation, and what caused the unexpected loosening of the woman's safety belt remains unknown, an official of Jiguang town government surnamed Chen told the Global Times Thursday.

The woman is in stable condition and being treated at a local hospital, Chen said. "We will keep the place closed until we find and fix the problem," he said.

Authorities in Shaoyang county, Central China's Hunan Province said a local amusement park has been shut down for at least two months, after its "flying chairs" ride fell from the air and injured 16 people on Saturday.

The park won't reopen to the public until an investigation is completed, said the director of the publicity department under Shaoyang government surnamed Liu. The investigation will take about two months, he added.

"An initial investigation during the Spring Festival holidays had basically ruled out human factors," Liu told the Global Times on Thursday, saying that experts estimated the electric control system of the "flying chairs" might have led to the accident.

Four of the 16 people had been discharged from hospital as of Wednesday, according to Liu. Three severely injured people are recovering, he said.

In Guangping county, North China's Hebei Province, 35 people sitting on an amusement ride at a local playground were trapped in midair for nearly three hours before being rescued by firefighters on Tuesday. The playground has been closed for further investigation, a Guangping government official told the Global Times Thursday.