David Zhang, a 31-year-old man working as a public relations manager in Beijing, found himself changing. He was what most would consider a typical guy who never focused on skin care, not to mention makeup. However, he spent more than 5,000 yuan ($764) on cosmetic products this year. He threw away his generic family-size shampoo and bought the high-end brand Schwarzkopf after consulting his female friends, and he also began using facemasks. "I have learned that facemasks have different functions such as moisturizing, whitening or anti-aging," he said. "I recently bought six packs of Japanese Utena facemasks, which focus on moisturizing and balancing my skin's oil and water elements."In 2011, Dimitri Katsachnias, the founder of AirParis, an independent advertising agency in the fashion, fragrance, jewellery, spirits and beauty industries, said in an interview by Global Entrepreneur magazine that "men in Paris spent about 50 years moving from using cologne to accepting aftershave, while in China it may only take one year."In most people's opinion, cosmetics products have always been something that is exclusively for women. However, during the recent Double Eleven Shopping Festival, the sales of men's cosmetics have sharply increased. Also, the search volume for the keywords "men's makeup" increased 157 percent during the Double Eleven Shopping Festival compared with last year. Chinese men seem to be working hard to take better care of themselves. 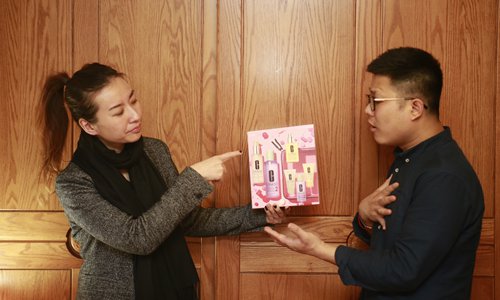