On June 5, 2014, Chinese President Xi Jinping stated in his speech at the opening ceremony of the sixth Ministerial Conference of the China-Arab States Cooperation Forum that the Belt and Road, namely the Silk Road Economic Belt and the Maritime Silk Road of the 21st Century, represent paths toward mutual benefit which will bring about closer economic integration among the countries involved and enhance their capacity to achieve endogenous growth and to protect themselves against risks. When concluding his speech, President Xi narrated a much relished story that took place in Yiwu, a city known as the world's capital of small commodities in East China's Zhejiang Province.

"There is a Jordanian businessman named Muhamad who runs a genuine Arabian restaurant in Yiwu City, where a lot of Arab business people gather. Through bringing genuine Arabian cuisine to Yiwu, he has achieved business success in this prosperous Chinese city, and has gone on to marry a Chinese girl and settle down in China. Integrating his own goals with the Chinese dream of happiness, this young Arab man has built a marvelous life for himself through his perseverance — he embodies a perfect combination of the Chinese Dream and the Arab Dream." 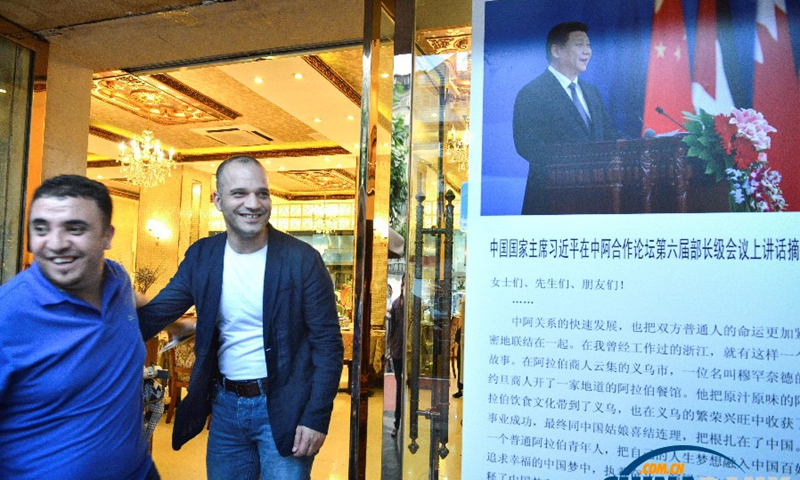 Muhamad greeting diners at the door to his Ward Restaurant. Since President Xi mentioned Muhamad and his restaurant in the speech at the China-Arab States Cooperation Forum, many people from China and abroad have come to dine here. (Photo: Global Times)

Yiwu is a county-level city in China that enjoys buying from and selling to the world. Every year, more than half a million buyers outside the Chinese mainland visit the Yiwu small commodities market, which offers over 1.8 million kinds of products. More than 13,000 merchants from 100-plus countries and regions have come to reside in this bustling international capital of small commodities.

Two blocks south of the Yiwu International Trade City is the new Beyti Restaurant that Jordanian businessman Muhamad opened in 2018. The restaurant serves authentic Arabian cuisine and bears witness to the stories of mutual benefit taking place under the Belt and Road Initiative.

"'Beyti' means 'my home' in Arabic. I hope that all who come to 'my home,' whatever their nationalities, will have their problems solved," said Muhamad, who has lived in Yiwu for nearly 20 years. One of the first Jordanians to settle down and start a business in Yiwu, Muhamad has always played his role as China's son-in-law among his friends, which has made him a friendship ambassador and a dispute mediator.

Foreign merchants often go to Muhamad asking him to help mediate economic disputes between traders of different nationalities. Due to his rich experience mediating foreign-related matters, at the end of June 2014, Muhamad was engaged by the People's Mediation Committee for Foreign-related Disputes of Yiwu City as a foreign mediator. There are a number of foreign mediators like Muhamad in Yiwu. The locals call them "laoniangjiu", an affectionate nickname for trusted figures in local communities.

The Yiwu municipal government highly values these foreigners' opinions. In 2015, a few foreign friends of Muhamad happened to mention that they had to carry their passports wherever they went and that if they lost their passports, replacing them would be most troublesome. Muhamad and some others raised this issue to the Yiwu government, and in less than a year, the Foreign Citizen Card was introduced for expatriates in Yiwu, which can serve as an alternative to passports in administrative affairs in the city. Cardholders enjoy the same social security treatment as Yiwu citizens in such areas as basic elderly care, medical care and children's education.

Muhamad said that he owes his career to the "customized" services that the Yiwu government has provided for foreigners in recent years. "The Yiwu government is generous. It helps you whenever you run into a problem. The government meets with representatives of foreign chambers of commerce on a regular basis to learn about any problems we encountered. The issues we raised, including children's education and medical care, have all been resolved." The government attaches increasing importance to making life and work more convenient for foreign merchants. Major hospitals in Yiwu have brought translators on board to make visits to the doctor easier for foreigners.

Muhamad has designed a Belt and Road promotion wall in Beyti Restaurant to help more merchants get to know the initiative. "Just as one chopstick breaks easily while a bundle of them don't, cooperation makes for better development," he said.

"I love China very much. I love my second hometown, Yiwu. As President Xi said, I have settled down in China."