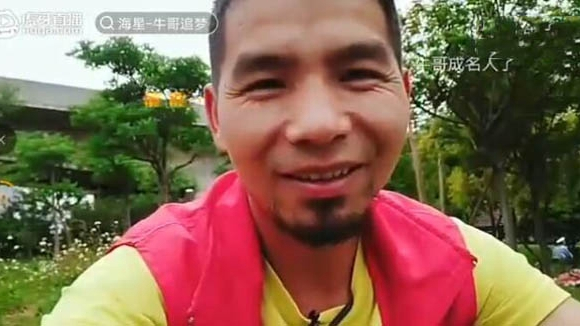 When you think of an online celebrity, you may not have imagined this guy.

Cai Yanqiu is a livestreaming anchor without a pretty face or fancy outfits, no visibly outstanding talents or a shining career, but he has successfully gathered over 376,000 followers in only two years on the livestreaming app Huya, with many people leaving comments like, “Praying that society will have more anchors like him!”

Cai has already helped over 50 homeless people reunite with their families through livestreaming.

He usually livestreams over 10 hours a day, wandering across the country in his old Santana, searching for people in need. He has traveled over 90,000 km in various Chinese provinces including Yunnan, Jiangxi and Guangdong.

Conventional wisdom says that one should go to the police or a shelter when one is lost. But many of us don’t realize how hard it is for the homeless to take initiative in asking for help.

Many homeless people are isolated because they are affected by physical or mental health issues, so they might refuse to receive or ask for help from the public.

That’s also the reason that Cai has decided to reach out to them. “They lock themselves in their own world,” he said. “Many of them lose the ability to communicate.”

His livestreaming account was named “Niugezhuimeng,” which means “ox chasing a dream” in Chinese, referring to his stubbornness and dedication in helping the homeless.

Cai usually wanders along the road, areas under the bridges, and garbage stations where the homeless take shelter. After identifying them, he would manage to start talking to them, trying to get valuable information and persuading them to go to the police. Sometimes, it would take days just to persuade someone to talk to him. Well, Cai has patience. He would have them take a shower and book a room in a hotel when needed.

According to Cai, he began the special cause for his own brother, who was lost for over three days in 1994 and soon passed away after he was found.

When he started livestreaming, many viewers thought he was doing charity as a gimmick to attract attention.

But things took a turn for the better. Some of the families that he had helped in reuniting with their homeless members joined his cause, even sending Cai a letter that read, “From now on, we will repay the giving of hope and love to the desperate.”

Many of his followers have also taken initiative, and even established an organization. They call themselves “the dream chasing league,” aiming to popularize and share information about the homeless to help them go home. By now, the league already has six chat groups with members across China, dedicated to helping the homeless and sharing updated information in real time.

“I already missed my brother. But I wish the homeless won’t miss a sincere helper named Cai Yanqiu,” said Cai.