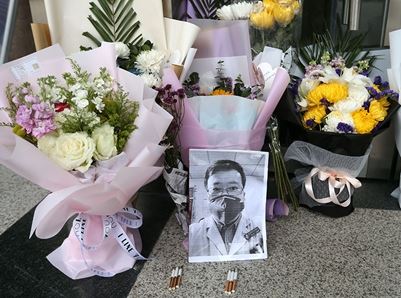 Chinese mainland netizens warned that Hong Kong secessionists and foreign entities are exploiting the grief expressed over the death of coronavirus "whistleblower" doctor Li Wenliang and are spreading anti-government rhetoric on social media.

Li, one of the eight "whistleblowers" in Wuhan, capital of Central China's Hubei Province, tried to warn medical personnel about the coronavirus outbreak but was reprimanded by local police, and eventually died of novel coronavirus pneumonia on February 7.

While many in the Chinese mainland were mourning Li's death, Hong Kong and anti-China groups were enlisting people to help sensationalize the story on Chinese social media in efforts to spread negative publicity on the mainland and incite the so-called democratic movement.

An online post - likely initiated by overseas anti-China forces - incited Wuhan residents to congregate and whistle in solidarity with Li on Friday. Experts said it is malicious to use Li's death to incite "social movements" in China, adding that such attempts are doomed to fail.

Chinese netizens were aware of the malicious actions from overseas anti-China groups that posted images on social media that revealed their plans, and criticized them for exploiting Li's death and agitating public sorrow.

China's Ministry of Public Security held a meeting on February 4 and stressed that amid the novel coronavirus outbreak, the ministry should prioritize safeguarding political stability to crack down on overseas forces who make trouble, and ensure a stable environment necessary to contain the epidemic.

Li's death prompted online rumors that included a fabricated post, which claimed that "Harvard medical school lowered its flag to half-mast in honor of Li Wenliang."

"These rumors are shameful and absurd. Some anti-China forces have used Li's death as a weapon to attack the Chinese authority, trying to wipe out the efforts made by the Chinese government in controlling the epidemic. Their motive is obvious and execrable," Zhu Wei, a professor at the China University of Political Science and Law, told the Global Times.

Li's death has amplified widespread public anger toward the Wuhan government's handling of the virus outbreak.

"But efforts from anti-China forces that have used the anger to foment political unrest are futile," Shen Yi, head of Fudan University's Cyberspace Governance Research Institute, told the Global Times.

"This can be seen from the fact that only two people went to Li's hospital to whistle following the online post," Shen said.

"Chinese netizens may be disappointed with the Wuhan government, but they are surely more intolerant of domestic and overseas separatist forces," said Shen.

"The anti-China forces, mostly internet trolls, are fragile. The government's focus should be given to fulfilling their responsibilities and not to hand them a sword hilt, as negative forces are best at amplifying our mistakes," Shen explained.

The Global Times discovered many online posts about how to organize anti-government propaganda on Pincong, a website based in the US. One article is titled "Free Hong Kong," a HK secessionist slogan.

Another post at the top of the website's homepage claimed that this was a "God-given chance" for people to unite and fight against the "common enemy" as "the people have never had such low trust in the government" brought about by "domestic turmoil and foreign aggression - the trade friction, the outbreak of the novel coronavirus, the situation in Hong Kong and Taiwan and the sharp economy gliding."

The same post asked, "Is Doctor Li a hero? Judging from Hong Kong standards, he certainly isn't; seeing things from a universal value, he hardly is one."

The post also mentions "action strategies," including spreading anti-government rhetoric as much as possible, and creating related trendy hashtags on social media platforms like Weibo, Douban and WeChat. Netizens were directed to major news platforms to post comments and lead discussions, provide online support to those with similar opinions, and hype anti-government comments and topics.

Global Times also discovered the Telegram group "daluwenxuan," which means in English "propaganda toward the mainland." As of this writing, it had 938 members engaged in creating anti-government posters, tags, and slogans to upload on Weibo to exploit Li's death and incite so-called "democratic movements" on Chinese mainland.

Anti-China forces have tried to depict Li's death as a massive blow against China's government in efforts to subvert the country. A few of them used the "Five demands" slogan to challenge the Hong Kong Special Administrative Region government.

One poster suggests that Li's family is in danger, and demands an "independent investigation on local authorities."

Li's wife wrote a letter to the public on Friday and said her family is doing well.

In response to public anger at Wuhan authorities over how they handled Li's case, the central authorities dispatched an investigative unit to the city on Friday to review the incident.

Some opposition forces in Hong Kong also tried to paint Li as a political dissident without taking into account that he was a member of the Communist Party of China (CPC).

Some pan-democrat legislators and anti-government protesters in Hong Kong organized a gathering to mourn Li's demise Friday night, spreading rumors that his pregnant wife was also infected with the coronavirus. However, proving all speculations wrong on Friday afternoon, his wife issued a public statement saying Li's family is doing fine.

Such depiction of Li as a political dissident has been criticized by Chinese netizens, as Li was a CPC member who once, on a Weibo post, expressed his willingness to fight the virus in the frontline as soon as he recovers.

The violent protest against the extradition bill in Hong Kong last year has made people from the mainland fully aware of the hypocritical discourse of Hong Kong pan-democrats, said Shen, suggesting that the unscrupulous political farce in Hong Kong make people in the mainland feel obnoxious and defensive to their secessionist behaviors.

Those setters-on overestimate the attraction of the American-style liberalism to Chinese people. We are all clear that Edward Joseph Snowden, America's most famous whistleblower, was never protected by the US government, Shen noted.

These conspirators are best at stirring up emotions from behind the scenes, as they do in Hong Kong. In the wake of the ongoing crisis, the call for people to gather outside and whistle at their own risk is both absurd and detestable. This is their online political show, which is not worth paying much attention, according to Shen.