Pilot program urged to be expanded to fight internet obsession

China's first app tool to prevent teenagers from getting addicted to the internet made a debut on numerous short video apps. 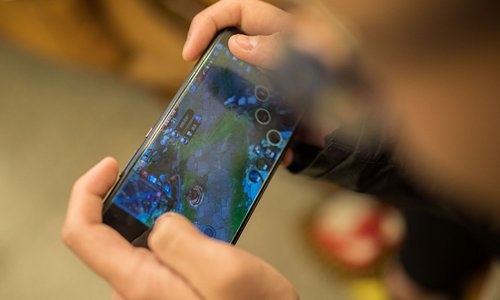 The tool has been embedded into domestic short video apps like Douyin, Kuaishou and Huoshan. A window pops up for users to choose juvenile mode when they open the app, the Cyberspace Administration of China (CAC) announced on Thursday.

Under the juvenile mode, users can only access limited contents. They are also limited to using the app for certain hours, functions and periods.

The app can screen out left-behind children in rural areas with location and user behavior analysis techniques, and automatically turn the juvenile mode on for them, according to the CAC.

"The young users who are under 16 years old will be forced to go offline after using the app for 40 minutes. Only the guardians can reopen it by entering the password," Annan, an employee with the public relations department of Kuaishou, told the Global Times on Thursday.

The teenagers cannot use the app from 10 pm to 6 am to ensure they get enough sleep, according to Annan.

The system is currently on trial and will be officially promoted in June, according to the CAC.

This is the first time for the domestic short video field to take measures to protect juveniles from internet addiction, which is significant for safeguarding healthy growth of minors and creating a good network environment, the CAC noted.

The number of short video users in China reached 648 million as of December 2018, and most of them are young users, according to the CAC.

Along with the short video industry's rapid development in recent years, many juvenile users become engrossed in it, the CAC said.

The move came after an announcement published by China's Ministry of Education on March 19 vowed to clean up harmful apps and strengthen online education.

The trial of the system is a vital move to solve the problem of teens getting obsessed with the internet, a woman surnamed Liu, whose son is addicted to playing computer games, told the Global Times on Thursday.

It should be included not only in short video platforms but also in some game apps, Liu said.