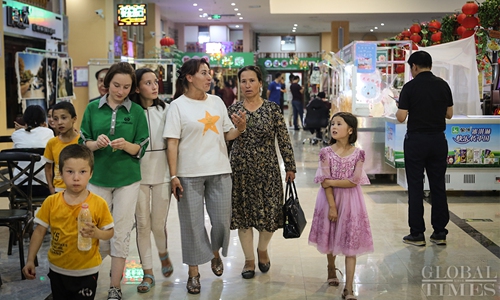 Based on a list of "students sent to re-education (who are) family members of those who went abroad and have not returned to Karakax," Zenz published the report, The Karakax List: Dissecting the Anatomy of Beijing's Internment Drive, on Monday, which slandered China's counter-terrorism and de-radicalization efforts in the Xinjiang Uygur Autonomous Region. Karakax is known as Moyu county in Hotan Prefecture of Xinjiang. The report was later hyped by several Western media outlets, including CNN, BBC, and the New York Times.

"The report is scrambled with subjective assumptions, which was cobbled together out of wishful conjecture, and thus cannot stand scrutiny, as it does not conform with the facts," Mehmut Wumrjang, governor of Moyu, said during Saturday's press conference, presenting concrete evidence that proves the report is a concocted tale lacking evidence. Mehmut revealed Zenz is a German national who also has a Chinese name, Zheng Guoen. 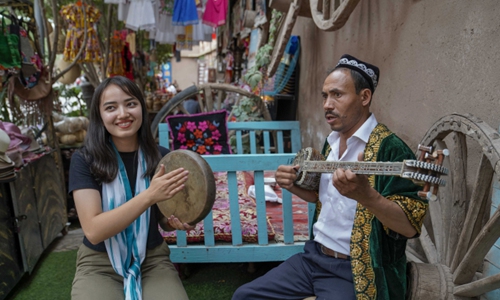 Zenz claimed in the report that all 311 people in the list hail from Moyu county and have overseas relations, besides they were detained at vocational education and training centers.

However, after careful investigation, it is found the majority of the 311 individuals on the "Karakax list" are residents of the Bositan Street in Moyu county, and they have been working and living a normal life, besides they never attended the vocational education and training, except a very few among them. Mehmut informed the presser those who were influenced by religious extremism or committed minor offenses, once received vocational education and training according to law.

Among the 311 people, only 19 have overseas relations, and they have never been subject to any vocational education and training, he added.

By identifying a person and other information on the "leaked list," the Global Times tried to trace a person fitting most of the description on the list and established contact with Memet Eli, who is currently residing in the Bositan street in Moyu county.

He learned that his name was on the so-called leaked list only after was reached by the Global Times. When the Global Times compared Memet Eli's information with the "leaked file" circulating in Western media, it was discovered that much of his personal information was distorted.

For example, according to Western media, Memet lives in the Yipubazha community, his father died, and her 65-year-old mother is named Abasihan.

However, in reality, Memet lives in the Xiwang community. His father is still alive, and his mother, Mayishan, is 72 years old.

The Western media also claimed one of his elder brothers has been sentenced to 19 years in jail for his associations with a terrorist organization, and that his second younger brother was sentenced to 10 years in prison for disturbing social order in February 2018.

However, Memet told the Global Times he has only one elder brother and his second younger brother has never been imprisoned. "I just spoke to him on the phone," he said.

Memet said he had volunteered to study at the vocational education and training center from August 2018 to May 2019. Speaking to the Global Times he admitted he was influenced by extremist ideas after watching terrorism-related videos and that he also breached the national family planning policy.

"Later, I heard law is taught in the vocational education and training centers. Although I think my Putonghua was fine, I still lacked the knowledge of the country's legal system. So I wanted to go to the center to study law and other skills for better self-development."

Haibier Maihesuti, 31, a resident in Moyu, is also on the list. He attended Saturday's press conference. His wife is a teacher and his two children are in kindergarten.

"My father lives abroad, and we often call each other. My mother and I run a restaurant and we live a happy life. We never studied at the vocational education and training center," he said.

"I've heard that some bad guys are using our information to mislead people, so I am here to tell you the truth," he said. 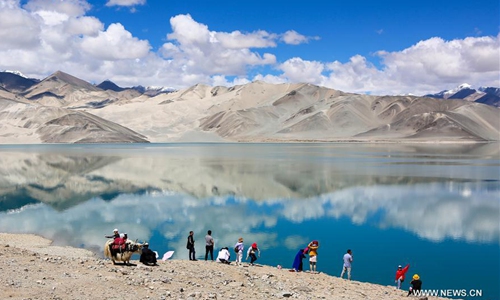 In Zenz's report, he claimed that some people were sent to detention centers in Xinjiang because of "overseas travel" history, "talking to people overseas," "selling their properties and leaving" or even "visiting foreign websites."

In response to these accusations, Yalikun Yakuf, the deputy chief of the Public Security Department of Xinjiang, said during Saturday's press conference some ill-intentioned people in the West, like Zenz, have mixed-up the concepts of normal deeds and criminal acts, so as to attack Xinjiang's counter-terrorism and de-radicalization efforts.

One example is the "going abroad" part discussed by Zenz in his report. On the surface, it was about going aboard for tourism; however, after lawful investigation, it was found that some people joined terrorist and extremist organizations after leaving China, and then returned to Xinjiang in a bid to perpetrate terrorist attacks, Yalikun said.

Another example is about "talking to people overseas" - it looks like these were normal international calls, but after investigation, it turned out that some people were contacting overseas extremists and terrorists to plot terrorist attacks in the region. As for the so-called "selling out properties and leaving," it seemed as if these people just changed their places of residence , but investigations revealed some of them actually intended to go for "Jihadi migration" and join IS by illegally crossing the borders, he said.

For those who travel aboard or communicate with people overseas, sell their properties and leave Xinjiang for normal purposes, and visit foreign websites for normal content, there will be no restrictions or countermeasures.

"But for those perpetrating criminal deeds and getting involved in terrorism and extremism using the above-mentioned means as a shield, measures will be taken by related authorities in accordance with law," Yalikun said.

Xinjiang's counter-terrorism and de-radicalization measures have been carried out in accordance with the law. All cases are handled on the basis of facts and evidence, and judged by its true nature under the principle of "innocent until proven guilty," evidentiary adjudication, and legally prescribed punishment, he noted.

The "Karakax List" report, using diagrams and tables, alleged 25.3 percent of the people in the "internment can be explained by their religious beliefs related reasons."

Ilijang Anayt, spokesperson of the information office of the Xinjiang regional government, said during Saturday's press conference, "There have never been surveillance on people for going to mosque, frequency of their mosque visits, or their fasting during Ramadan, as alleged by Zenz, let alone the so-called religion control." 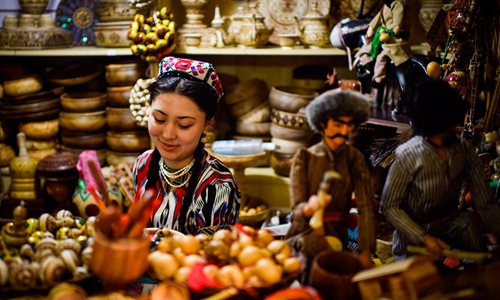 In contrast to Zenz's accusation, Islam is practiced healthily in Xinjiang, with over 20,000 mosques, 29,000 religious personnel, and 103 Islamic associations at various levels. Xinjiang has 10 Islamic institutions.

As for some Western media's accusation of Xinjiang's use of massive surveillance, Shen Yi, director of the Research Center for Cyberspace Governance in Fudan University, said a poll conducted on the US citizens after the 9/11 tragedy showed about 80 percent of the respondents agreed that sacrificing some personal freedom in exchange for national security is necessary.

"Why has the same situation become a topic in China's Xinjiang that the West keeps hyping and criticizing?" Shen questioned.

China's counter-terrorism expert Hua Xiqiang (pseudonym) told the Global Times it has become a routine that some "East Turkistan" terrorist organizations or religious organizations supported by the US and Europe receive foreign funding and use the voices of Western MPs and media to criticize China under the banner of human rights issues.

Hua said it is possible intelligence agencies of Europe and the US are involved in the "document leak" and hyping of the issue.

Mehmut said, on Saturday, he hopes people can see Zenz's true colors and expose the purpose behind his "research."

"Zenz who always creates trouble with false stories is actually a backbone member of the 'Xinjiang's Internment Camps Research Group' established and orchestrated by American intelligence agencies," he said.

In the name of a so-called expert, Zenz has been ceaselessly publishing baseless and fabricated remarks, intending to cooperate with anti-China forces in smearing Xinjiang in the name of academic research, Mehmut  noted.

The credibility of Zenz is questionable, and some media and Chinese experts criticized him as a "far-right fundamentalist Christian" and anti-Communist scholar.

Several Western media cited Zenz in their reports, which showed they either failed to objectively report news on China or they had some malicious political purposes.

Since November 2019, the New York Times and the International Consortium of Investigative Journalists (ICIJ) have been claiming to have obtained many documents from Xinjiang. The ICIJ labeled the "leaked documents" as "The China Cables."

In his article, Zenz claimed Asiye Abdulaheb, who had previously leaked the "China Cables," gave him a document consisting of information on trainees in Xinjiang who have family members abroad.

Zenz claimed, "for the purpose of verifying the personal identities of those listed in the document, the author benefited from being in possession of a local government cache of over 25,000 files."

One question that analysts must have asked on Zenz's claim - how could he get so many government files with detailed personal information, if Xinjiang is enforcing strictest measures as they reported?

Zenz is one of the scholars who claimed that more than one million Uygurs were detained in Xinjiang. However, the US-based news website Grayzone released a report in December 2019, saying Zenz's claim was based on a single report by Istiqlal TV, a Uygur exile media organization based in Turkey.