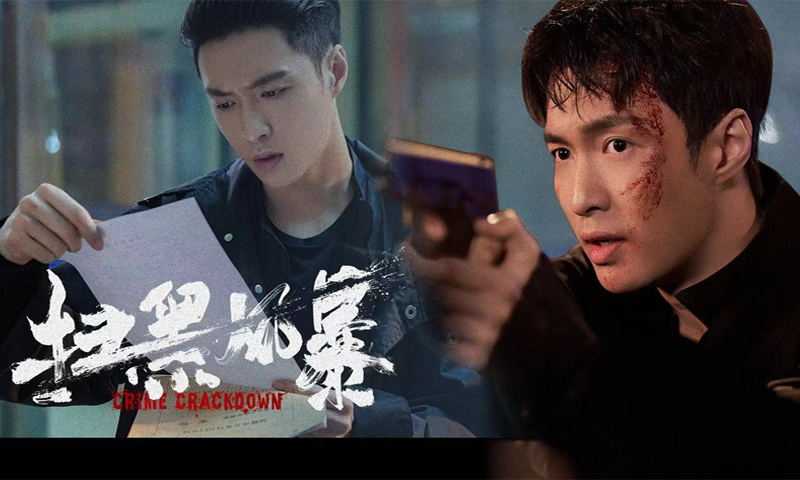 As China has achieved significant results in its national crackdown on gang crimes over the past three years, an anti-gang TV series based on sensational real-life cases has sparked a craze with millions of netizens hailing that "justice will never be absent" in a country rule of law.

Paying tribute to the anti-gang heroes, revealing the country's determination in fighting gang crimes, warning the public to not join in illegal groups or shelter criminal groups, the TV series Crime Crackdown has struck a chord with audiences.

Under the guidance of the Committee of Political and Legal Affairs of the Communist Party of China (CPC) Central Committee, the TV series narrates a story of how a national anti-gang supervising group and local police officers arrest gangs and officials that protected the illegal groups under what is known as a "protective umbrella," the producers told the Global Times on Tuesday.

Li Eryun, general producer of the TV series, told the Global Times that the project to produce the series started in 2019 when Sun Xiaoguo's gang-related crime and a murder case in Central China's Hunan Province shocked the country.

Sun Xing, a character in the TV series, is believed to be based on criminal Sun Xiaoguo, who was executed in February 2020 for gang-related crimes committed after serving a 12-year prison sentence.

According to the producers, the Committee of Political and Legal Affairs of the CPC Central Committee agreed to participate in the creation of the work and authorized the production team to look up materials of related cases for reference.

The difficulties during gang crackdowns have been vividly presented in the series. Some netizens complained that the series makes slow progress and hoped police officers can arrest all the criminals as soon as possible, but reality is not a novel.

To clean up gangs needs sufficient evidence and going deep into related cases so authorities can grub up the roots of the crimes, the Committee of Political and Legal Affairs of the CPC Central Committee said on its WeChat account on Tuesday.

Apart from Xiaoguo's case, the TV series is also inspired by several other real cases that shocked the country, including a case of a body buried in a playground in Central China's Hunan Province, illegal loan practices - especially nude loans which request women to provide naked photos as collateral for loans on some online lending platforms.

The TV series as well as the real-life cases have trended on Chinese social media platform Sina Weibo. One of the series-related topics has earned more than 2.26 billion views on Weibo as of press time.

The series makes more people understand that illegal activities are always hidden among us in disguise, warning public to be vigilant and to be self-reflect, said netizens.

Many netizens noted they were touched by the rich meanings conveyed by the series, which pay tribute to the anti-gang heroes, showing the determination of the country to fight gang crimes and highlighting that "justice will never be absent."

China has busted more than 3,600 mafia-like groups over the past three years, 1.3 times as many as the total of the previous 10 years, the Xinhua News Agency reported in March.

Ever since China launched its targeted campaign against gang crimes in 2018, the country has endeavored to fight gang crimes through a series of actions. According to a poll conducted by the National Bureau of Statistics in the first half of 2020, 95.1 percent of the Chinese people are satisfied with the results of the country's special campaign, the report noted.