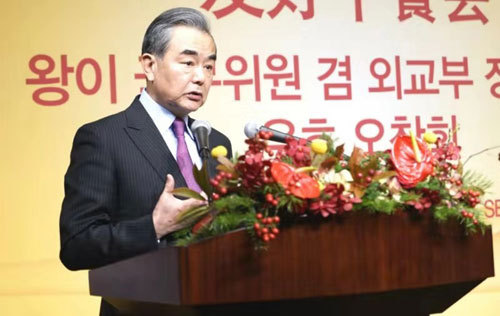 When meeting with South Korean friendly personnel in Seoul, Wang said China has made remarkable achievements because it has taken a right development path of socialism with Chinese characteristics.

The path of development not only suits China's national conditions but also complies with the trends of the times, he said.

However, not everyone in the world wants to see a successful China and some elements are attempting to smear and bad-mouth China, and are even preaching containment of China, Wang said.

The smear campaign is either driven by ideological prejudice or arrogance of power politics, Wang said, adding that "any attempt to contain China is doomed to fail."

He stressed that every country has its right to development and every nation should be treated equally.

The Cold War mentality is out of date and hegemonism is unpopular in the world, Wang said, adding that the rejuvenation of the Chinese nation is an irreversible historical trend and no one can obstruct it.