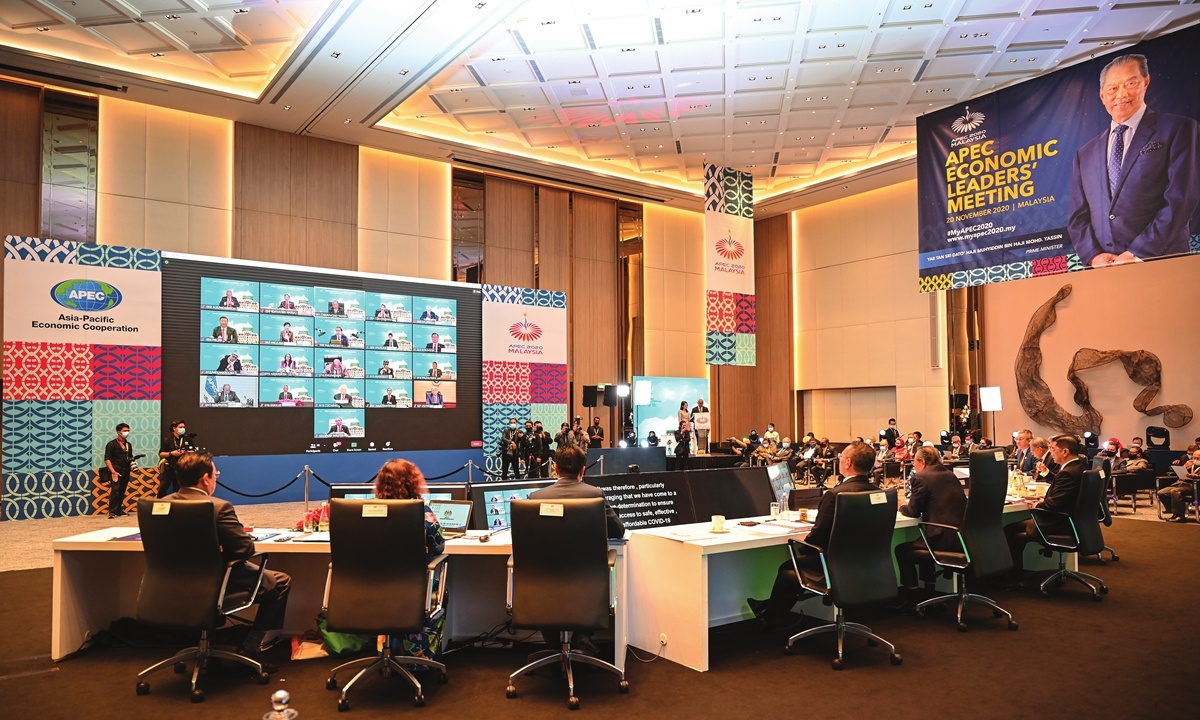 World leaders are shown on a large screen holding up their copies of the 2020 Kuala Lumpur Declaration during the online Asia-Pacific Economic Cooperation (APEC) leaders’ summit in Kuala Lumpur on Friday. (Photo: AFP)

At the end of a tough year in which the world has badly suffered from the deadly COVID-19 pandemic, members of the Asia-Pacific Economic Cooperation (APEC) sat together and jointly revealed a new vision for the next two decades. It offers a crucial growth engine for the global economy in the post-pandemic era and a rosy prospect for international community, which is in need of comprehensive cooperation, experts said on Saturday.

After 26 years since the announcement of the 1994 Bogor Goals, the APEC Putrajaya Vision 2040 came at a critical time, envisioning "an open, dynamic, resilient and peaceful Asia-Pacific community by 2040, for the prosperity of all our people and future generations," read the statement.

The vision highlighted three major economic drivers for its future efforts, including trade and investment, innovation and digitalization, as well as strong, balanced, secure, sustainable and inclusive growth.

It sends a signal that, by 2040, the global economic center, innovation center and market center are set to shift to the Asia-Pacific region, Wei Jianguo, former Chinese vice minister of commerce and executive deputy director of the China Center for International Economic Exchanges, told the Global Times on Saturday.

"Covering over 60 percent of the global economy, the APEC's new vision lays a solid foundation for the growth of the economies and the prosperity of billions of residents."

The joint communique underlines its support for agreed upon rules of the WTO in delivering a well-functioning multilateral trading system and promoting the stability and predictability of international trade flows. While the global economy has been undermined by rising protectionism promoted by some Western countries led by the US, the APEC vision reaffirmed its stance on safeguarding multilateralism and free trade, with an aim to promote regional economic integration based on market rules, instead of one country's interest or desire, Wei noted.

"With innovation and digitalization as an engine, there would be a second wave of globalization in three to five years after the pandemic, despite the persistence of certain degree of anti-globalization push," Wei said.

Though the US led by Trump administration has been relentlessly confronting China from triggering a trade war to cracking down on Chinese tech firms, Wei noted that the future scope of cooperation between the two largest economies remains wide in the long run, including innovation and digitalization, as digitalization is comprehensively expanding to areas such as epidemic containment and environment protection.

Multilateralism, free trade and regional economic integration have been major forces driving the rapid growth of the region. Making a long-term commitment to supporting multilateralism, it has demonstrated a firm determination of the members to promote regional integration, Yang said.