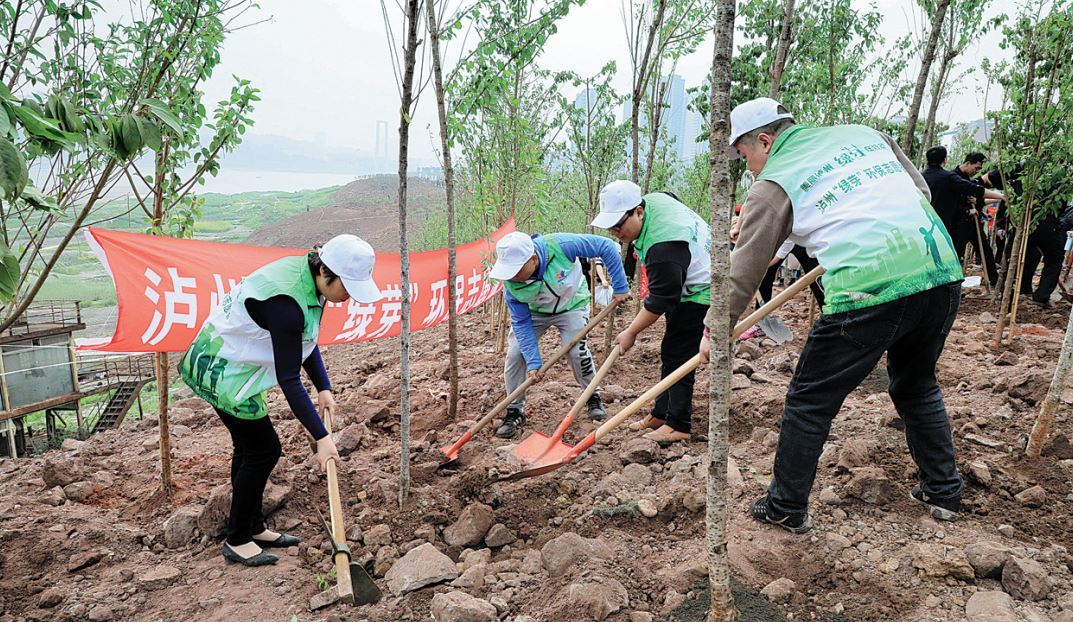 Luzhou residents use points gained through the Lyuya app to plant trees at a site in the city. (Photo: China Daily)

For the past four months, Lu Chuan, 26, has been taking photographs of his empty plate and bowl after every meal, before uploading the images to Lyuya, or Green Bud, a phone app that promotes green lifestyles.

In this way, after each meal, he receives five points in his account with the app, and also contributes to a reduction of 144 grams of carbon dioxide.

Lu, a government employee, also gains points by taking buses, riding bicycles and for other green lifestyle activities. He can redeem the points for shopping coupons, and currently has some 5,000 points with the app, but has yet to decide how to use them.

He finds it more fun to accumulate points in the app. "It motivates me to maintain a green lifestyle," he said.

The app is an example of efforts made by provincial, city and county governments to encourage the adoption of low-carbon lifestyles.

According to a proposal unveiled after a session of the Central Committee of the Communist Party of China in late October, to achieve a fundamental improvement in environmental quality by 2035, the nation will strive to achieve green production and lifestyles throughout all areas of society.

Wang Xingquan, an official with the bureau of ecology and environment in Luzhou, Sichuan province, said Lyuya combines government guidance and market forces in its design, as it provides incentives for people to adopt green lifestyles.

The app was launched by the bureau and State-owned Luzhou Bank, with guidance from the Luzhou environmental protection committee, headed by the city's mayor Yu Xianhe.

Gu Zhaowei, head of Meiyalian Environment Technology, based in Chengdu, capital of Sichuan, and which has been developing such an app since 2017, said government participation is necessary for an online platform aimed at carbon reduction.

For example, access to public transportation data, some of which is considered confidential by the authorities, is key for the operation of such platforms in helping verify people's green travel conduct.

Gu's company only managed to access data to Chengdu's subway system after one year. However, in Luzhou, thanks to strong support from the local government, Luzhou Public Transport Group Co agreed to provide access only one week after being contacted, he said. 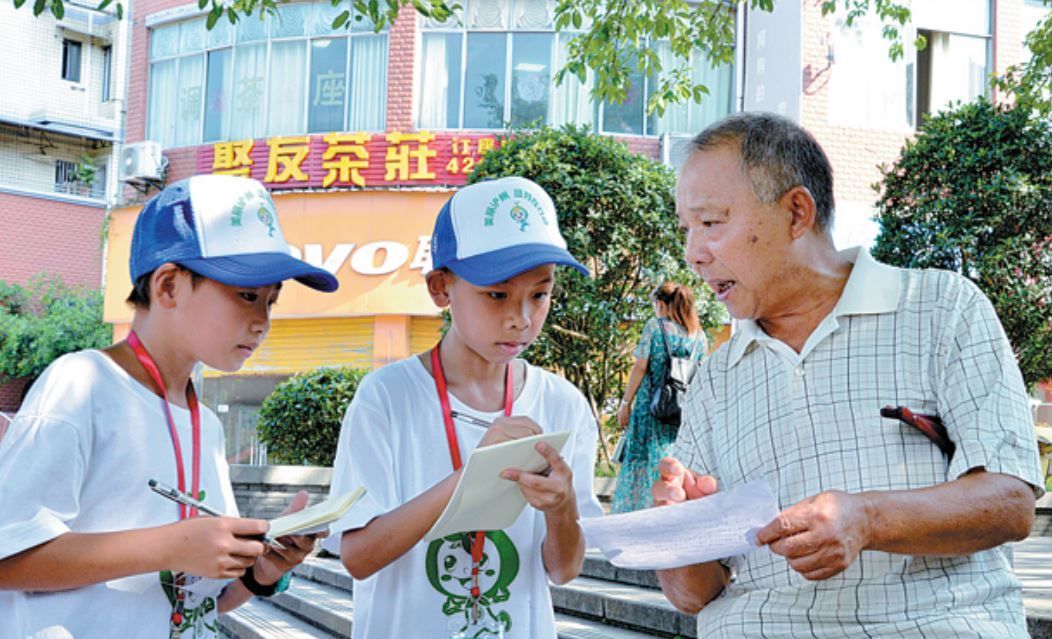 The authorities in Luzhou use their resources to support the platform, and Gu said his company has a certain degree of autonomy in managing internet-based business approaches.

Liu Xun, head of the publicity department at the Luzhou bureau of ecology and environment, said the app's developers and government officials have been enthusiastically diversifying low-carbon scenarios that can win points for users. Regular half-day brainstorming sessions are held, with participants involved in heated discussions.

Users can gain points, for example, if they use Luzhou Bank's digital services, instead of resorting to paperwork.

They can also win points by answering questions posted in the app about environmental protection, and by sharing with their friends tips on living a green lifestyle.

Starting from the fall semester, students at Sichuan Vocational College of Chemical Technology will acquire points if they perform well in conserving electricity and water in dormitories. The app will also include a section that encourages recycling of garbage and other waste.

While users can exchange their points for goods, they can also choose to donate them to have trees planted, or to have fish fry (baby fish) released into natural waters to enhance biodiversity conservation. 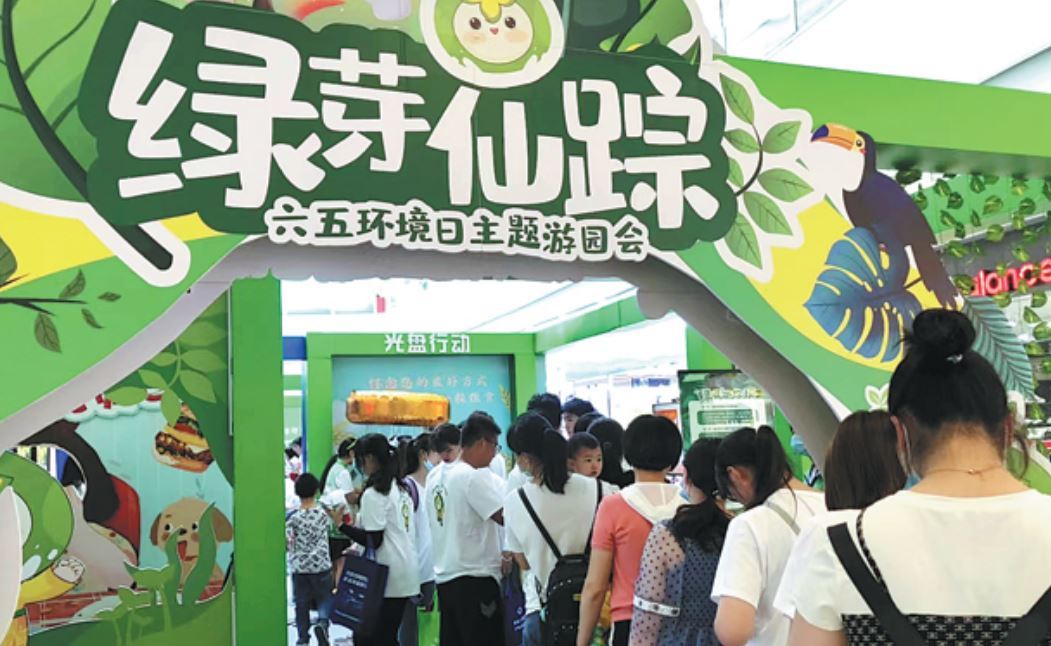 Residents in the city attend a promotional event for an "empty plates" campaign. (Photo: China Daily)

Liu said the bureau, which is still in close contact with the local transportation authority and insurance companies, plans to introduce an incentive mechanism in the app to encourage vehicle owners to reduce the time they spend behind the wheel.

With access to data from the authority's traffic monitoring system, he said the app will verify if car owners have avoided using their vehicles, as claimed. In addition to points, owners will be spared insurance contributions on the days they don't drive.

In cooperation with Luzhou Bank, it is also planned to make users' carbon reduction contribution with the app a reference point to increase their credit lines, Liu said.

Xue Xiaoqin, the bank's vice-president, said, "It's our responsibility to contribute to the country's climate goals of peaking carbon emissions before 2030 and becoming carbon neutral before 2060."

The environmental bureau has received support from other government agencies in the city.

In May, the Luzhou government published a plan initiated by the bureau, which pinpoints 16 tasks for promoting the Lyuya app, including publicizing the app, along with financial support. Implementation of each task is designated to specific government bodies.

Zhao Xiaoqiong, a leading official with the bureau, said, "The document means that if we run into difficulties that go beyond our capability, the municipal government will come forward to help."

To include more opportunities to win points with the app, Zhao visited at least 10 government bodies and public institutions.

She said some government bodies have taken the initiative to approach the environmental bureau. For example, officials from Luzhou Intermediate People's Court visited the bureau, with the aim of cooperating via the app.

Zhao said she used to think that cooperation between the bureau and the bank would be hard to achieve, but such contact has produced "a collision of ideas" that may lead to more such opportunities.

She said one potential issue on which the court and bureau could cooperate is in seeking volunteers to help implement verdicts handed down by the court that relate to ecological compensation.

Zhao cited the case of an elderly man punished for damaging forestland by burning down numerous trees. The defendant, who was too old to be imprisoned for violating fire regulations, was ordered to plant new trees to compensate for the damage caused.

The app can also play a role in attracting people to take part in court hearings related to the environment－helping to raise legal and environmental protection awareness among the public, Zhao said.

Although currently funded by the government, the app is expected to be able to support itself financially in three years. 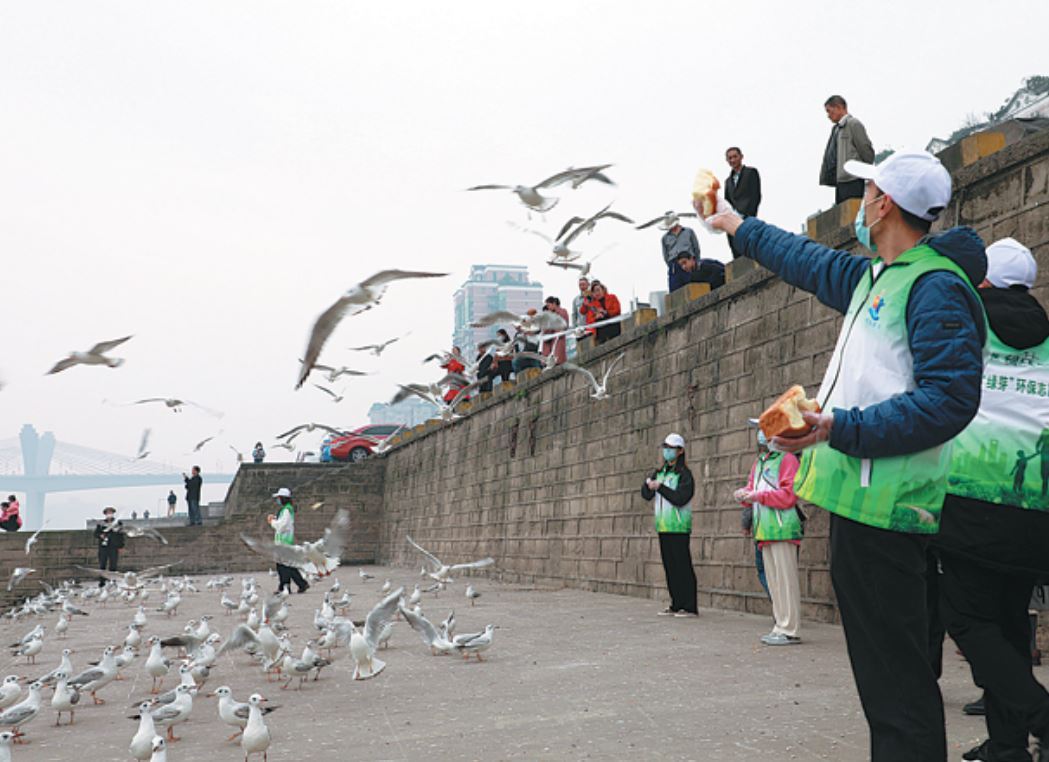 Zhao said one potential source of income for the app is dividends obtained from recycling companies seeking business on the platform. The company running the app may also benefit financially by extending it to other cities.

Gu, from Meiyalian Environment Technology, said that with support from the authorities to fund the app, the company can continue to operate it, and running costs are expected to fall following consistent improvement efforts.

Instead of seeking business opportunities from other companies, he expects to see more partners increasingly approach the platform for cooperation, as the number of people using the app continues to rise. Gu added that this will also help reduce human resources costs.

According to the bureau, the app has made significant progress.

As of the end of June, more than 35,000 people had registered with it, and there were about 2,000 active daily users. The total carbon reduction it has recorded exceeds 10 metric tons.

Lu, the public servant, said he has been leading an increasingly low-carbon lifestyle.

"The app reminded me of the need to mend my ways," he said, adding that he now turns off lights every time he leaves a room and also reminds his colleagues to close the door and window before turning on the air conditioner in his office. 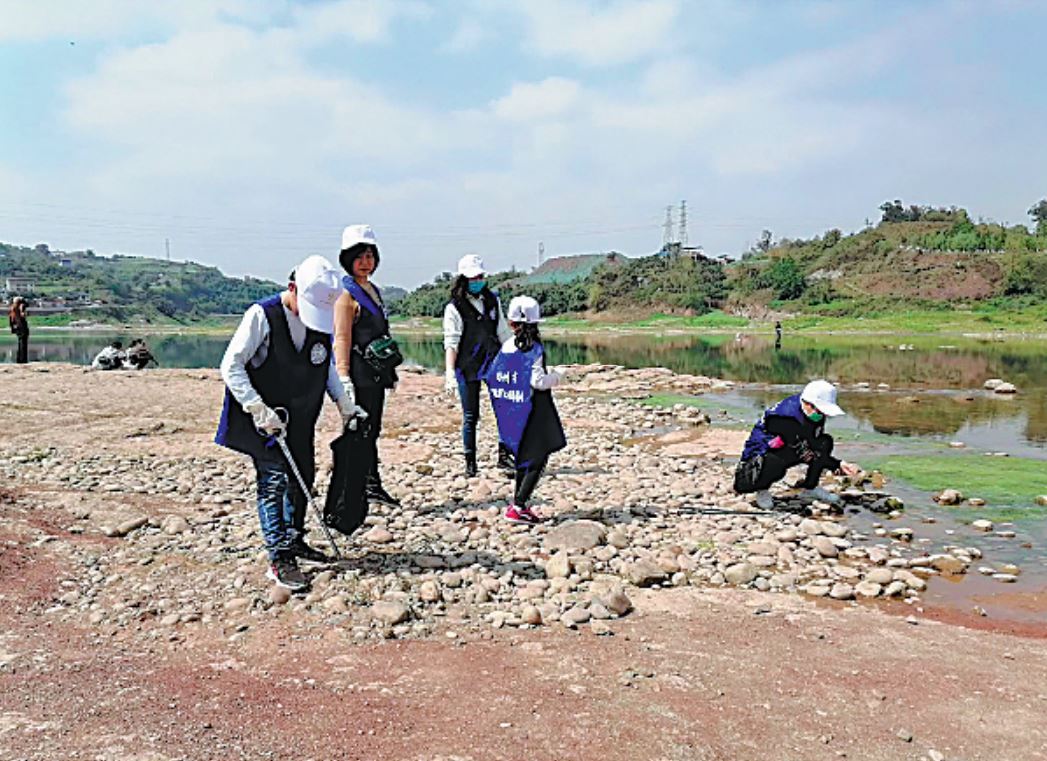 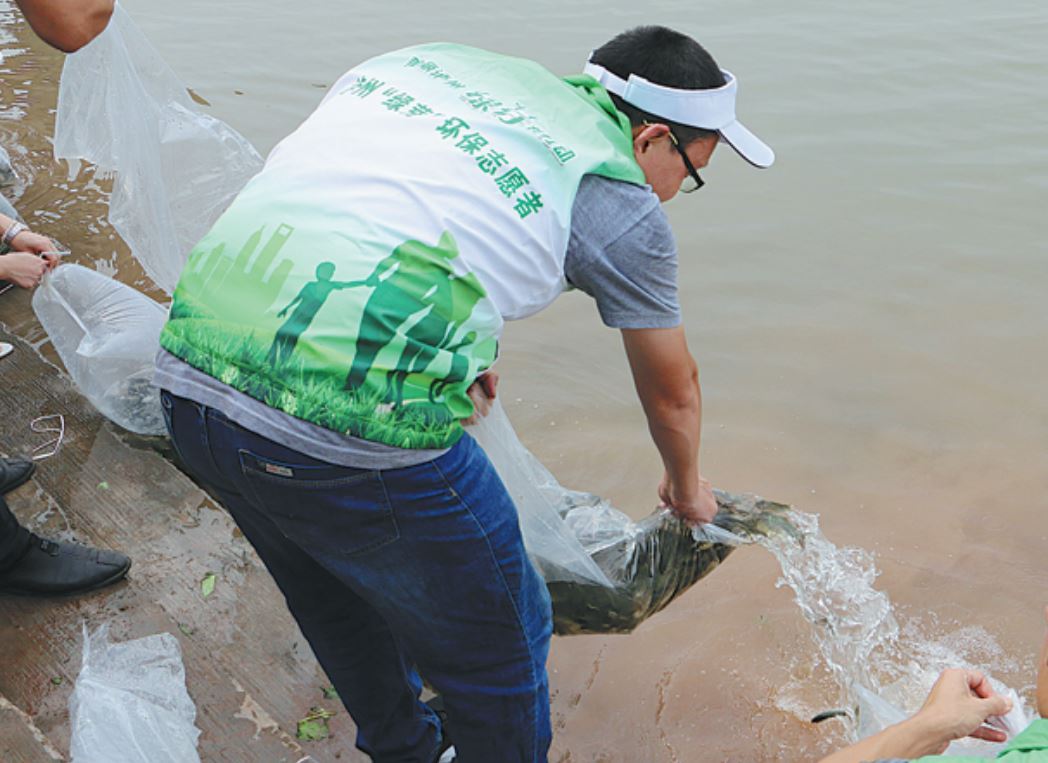