YINCHUAN, Oct. 18 (Xinhua) -- One of farmer Shi Haibo's Golden Delicious was auctioned off at 1,988 yuan (230.3 U.S. dollars) at an apple competition in the city of Zhongwei, northwest China's Ningxia Hui Autonomous Region. 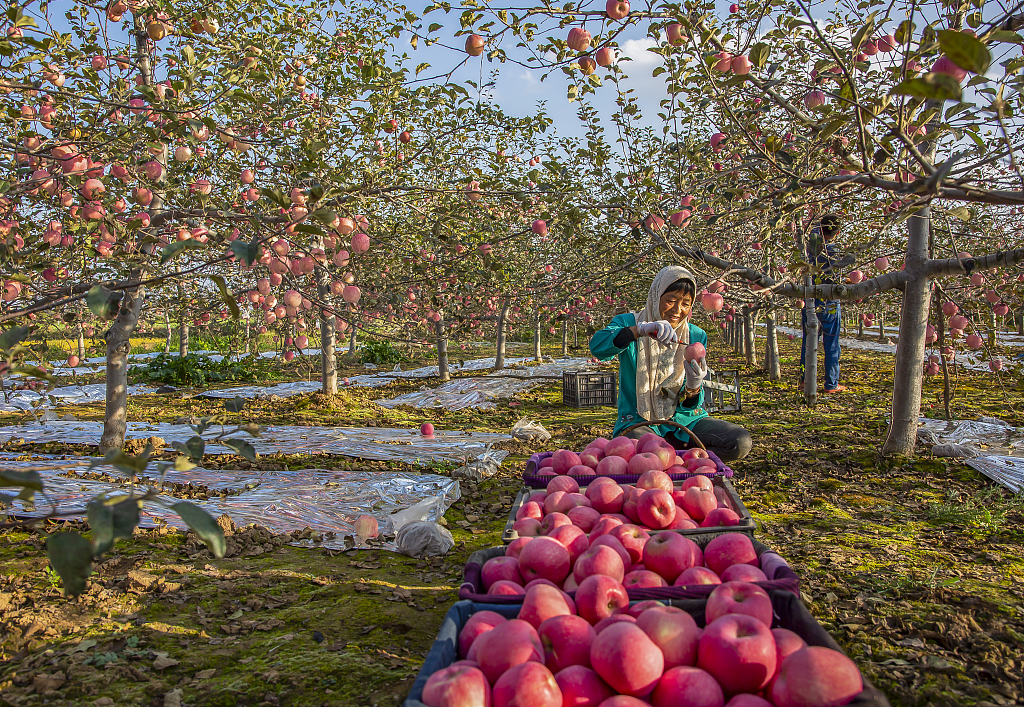 With a perfect shape and taste, the apple stood out from over 130 contestants last Saturday and was awarded "King of Golden Delicious."

"What a surprise," said the 34-year-old farmer. "All these years of efforts paid off."

Located on the edge of the Tengger Desert at 37 degrees north latitude, the city of Zhongwei boasts sufficient sunlight and the large temperature difference between day and night, which makes it a golden zone for the development of fruit industry. Crisp and sweet, the fruit produced here is nutritious.

Shi lives in Zhongwei's Chengnong Village, where almost every family has an apple orchard. In the 1990s, when low-yielding wheat and corn were still the main crops in the village, Shi's father was among the first batch of beneficiaries from growing apples.

"At that time, apples brought an average income five times more than that of the grain," Shi said.

In around 2010, considering the remarkable economic benefits, the city government issued various incentive measures, including the agricultural subsidies, to encourage farmers to plant apples.

Shi took over his father's 6.67-hectare orchard that year and has been devoted to his apple career since then.

He frequently traveled to Shaanxi, Shandong, Gansu and other major apple production provinces to learn farming knowledge and management skills. For about a decade, he has become an apple expert.

"Trimming leaves to ensure enough sunlight and rotating the apples for their color. There is a lot to learn in fruit plantation," he said.

So far, the planting area of his cooperative has exceeded 666.67 hectares and its products have been sold across China through e-commerce platforms and chain supermarkets.

"With high quality and a stable market price, we can make at least 6 million yuan of net profit out of our apples this year," he said.

In recent years, the city of Zhongwei and some other parts of Ningxia have taken the apple industry as the primary way for rural revitalization and improvement of residents' income. The region's apple planting area has reached around 40,000 hectares, with an annual output of about five billion tonnes and a yearly output value exceeding over three billion yuan.

A total of four special apple varieties of Ningxia, including the Golden Delicious, attended the competition, which aims to promote the region's apple industry and provide a platform for fruit farmers and apple dealers to learn from and cooperate with each other.

"Over the past three years, we have purchased a total of 1,500 tonnes of apples in Zhongwei's Shapotou District and will strengthen the bilateral cooperation to serve consumers with more tasty and juicy apples," said Lin Maoshun, a businessman from east China's Zhejiang Province at the competition.

"I feel more confident about the apple industry. We have trained 600 farmers on standardized production, which can add more than 1,000 yuan per mu (0.067 hectares) of apples they plant," Wu said.

"In the future, we will expand our business to areas such as village tourism to help more farmers make a fortune," Wu added.